Instead of One-Size-Fits-All, the EU Should Become More Flexible

The debate on the future of the European Union has been ongoing ever since the Brexit vote of 2016, with many different and often contradictory visions and no end in sight. In a new study Concentric Circles and Flexible Integration: A Vision of Visions for Europe’s Future, our Research Fellow Kai Weiss argues that this is only one more sign that the limits of the current EU framework of one-size-fits-all solutions has been reached. Instead, member states should think of implementing a more flexible system, where everyone can attain one’s own vision. Download the study or read it below:

The Problem with One-Size-Fits-All

To have a vision for the future of Europe is almost a prerequisite for being relevant in today’s political scene on this continent. Ever since Great Britain decided to leave the European Union in 2016, the discussion on where the soon-to-be EU-27 should be heading has been ongoing. This debate will not vanish anytime soon with European elections coming up in May 2019, and certainly, subsequent discussions taking place on what reform plans should actually be implemented.

One core characteristic of the debate is that the reform plans themselves are extremely diverse. One only has to compare the visions put forth by French President Emmanuel Macron with his demand to press ahead on the path of the ever closer union, to Lega leader Matteo Salvini in the traditional Eurosceptic role, and the Dutch Prime Minister Mark Rutte, who is arguing for an EU which puts more emphasis on free trade and the rule of law instead of integration by any means. 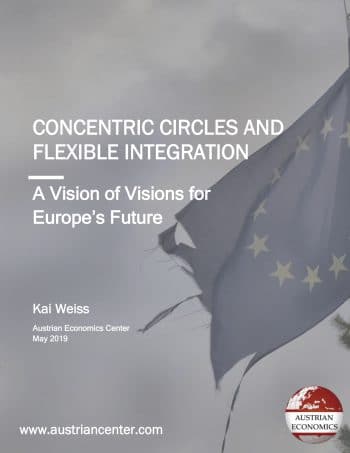 This will become a problem sooner or later, as the EU is still built on one-size-fits-all solutions, a fact which has led to much frustration on all sides. Those not too fond of EU integration – just take the British as an example, have felt betrayed since they, in their view, were forced to go much farther than was originally promised to them. Those who want to go further, however, are also not happy with one-size-fits-all: in their mind, more skeptical member states have always held them back. The European Commission has been especially adamant about this in recent times by arguing that unanimity votes on such sensitive topics like tax and defense policy should be replaced by majority voting.

Thus, the conundrum is that solutions on the European level most often affect all 27 member states, but to get them to agree and be satisfied about those solutions is quite difficult. Indeed, it is increasingly impossible, especially in controversial areas like refugee policy, the euro, or foreign policy. As Demertzis, Pisany-Ferry, Wieser & Wolff noted in 2018, “the assumption that an ever-closer-union of 27, or more, member states will all reach the same goal has, in itself, become a cause of ineffectiveness.” This will only worsen when those very distinct visions about the future will directly clash. The EU has reached, one might say, the limits of its current framework.

A solution for all parties involved might be to move away from the traditional one-size-fits-all approach. The EU, instead, needs a more flexible structure to deal with its heterogeneity of opinions.

Not that the idea of a system based on flexibility is a novelty. For long, the idea of a multi-speed Europeor two-speed Europe has been floating around, every once in a while being brought up, but eventually ending up in the gutters again. Especially member states from Eastern Europe have been heavily opposed to this idea since it seems to them that this would lock them in as second-class members indefinitely – they are now lagging behind on integration efforts, and, the argument goes, this would remain so.

In recent years, however, another reason for opposition has also been a fear that a more flexible system would lock all member states up to being in favor of an ever closer union. Yes, a multi-speed Europe would create more flexibility and opportunities for more Eurosceptic countries to not have to go with the same speed than others. But, crucially, the direction that all member states would be “speeding to” with different velocity would still be the same: namely, more integration. By signing up to this idea, some fear they could be forced to join the euro or having to sign up to other ideas they don’t support maybe later than others, but still at some point.

Nonetheless, there are other options of increased flexibility which would not entail the necessity to go the same direction.

The idea of concentric circles has been around since the late 1980s when then-French President Francois Mitterand proposed, though for different reasons, “concentric circles in which the central and eastern European countries would be put in a political halfway house to prepare themselves for eventual EC [European Community] membership”. 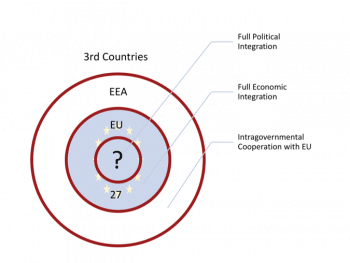 The idea gained steam again when the current French President Emmanuel Macron put the idea forward in the fall of 2018. Jean-Claude Juncker’s scenario 4 titled “Those who want more, do more” from his White Paper of 2017 was similar, though the Commission President dropped it quickly. Macron, one can speculate, had seen some rather ferocious responses to his vision of Europe (though, of course, at the same time, it received enthusiastic support by others). He perhaps realized that there was too much opposition to his ideas, making one-size-fits-all impossible.

In the framework of concentric circles, member states can choose how highly integrated they are – each level, i.e. each circle, is self-contained and stable. There will be a Core Europe in the center which is going full-steam on integration efforts. But at the same time, there are outer circles doing less. Member states could simply decide which circle they want to belong to and, thus, how far inside the overall circle they want to go. This concept, similar to the multi-speed Europe, still entails a progressivity of sorts: there is a certain assumption that the outer circles would sooner or later move to the inner circles and, ultimately, to the core. But in contrast to multi-speed, no obligation would be involved. Member states would still be free to decide to stay in an outer circle.

Alternatively, another idea which has been floating around for some time is a Europe of Clubs. The club model would consist of stable, self-contained and coherent arran