After Us, the Deluge: Europe Ten Years After the Crisis

The last ten years have been difficult ones for many, to put it mildly: the near collapse of the international financial system, bailouts of banks, sovereign debt crises, massive unemployment, with subsequent headlines of government spending austerity in many countries. There have been countless initiatives to improve competitiveness, dozens of announcements of spending cuts or targeted investment, and billions spent on this or that programme.

But behind these headlines, and against the background of the sovereign debt crises, unemployment and supposed austerity, what has the impact of all these actually been for European Union countries? This article presents a series of metrics from the OECD and Eurostat – looking at government revenue and spending, government debt, international competitiveness and employment rates – to illustrate where there have been some changes and where, despite many heated headlines, there has actually been very little.

Comparing general government expenditure and revenue presents a mixed picture. Of the 28 EU countries, government expenditure (measured as a percentage of GDP) increased in 13 and dropped in 15, albeit that these were very marginal increases/reductions in five countries. In terms of revenue collected (i.e. taxes, duties etc.), this increased in 21 countries and reduced in seven. Within these figures there are obviously some outliers – Ireland, for example, had extremely high expenditure in 2008 (not least due to bank bailouts), accounting for the very large subsequent reduction. 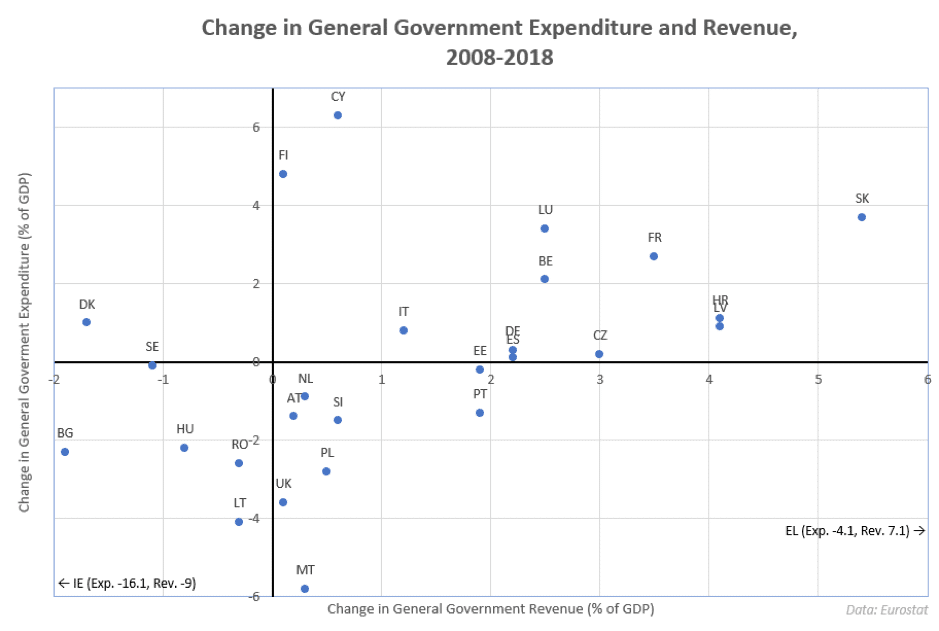 Despite all the headlines of austerity, government expenditure has continued to rise in almost half of the EU: in only 12 of the 28 EU countries has it dropped by more than 1% of GDP. Perhaps less surprisingly, the amount of revenue taken by governments has increased in three-quarters of the EU. Some of this has clearly been necessary to reduce fiscal deficits, but it is notable that the state has continued to expand, not least in France, Italy and Belgium.

Two interesting areas of expenditure (albeit not necessarily directly related) are research and development (R&D) and pensions: the first as such expenditure is needed if countries are to be competitive and increase productivity in the long term; the second as with demographic change, pensions are likely to consume an increasing part of government expenditure. R&D expenditure (whether by business or government) can fluctuate considerably; pension expenditure is determined by legislation and is (generally) more predictable.

Between 2008 and 2016, the last year for which both sets of figures are available, there is (unsurprising) no real linkage between the changes R&D and pensions expenditure, measured as a percentage of GDP. There does not appear to be any geographical pattern or EU accession date grouping in the rates of increase or decrease. What is interesting is that despite the various crises from 2008 onwards, R&D expenditure – which covers the business enterprise, government, higher education, and private non-profit sectors – has increased in nearly two-thirds of EU countries. 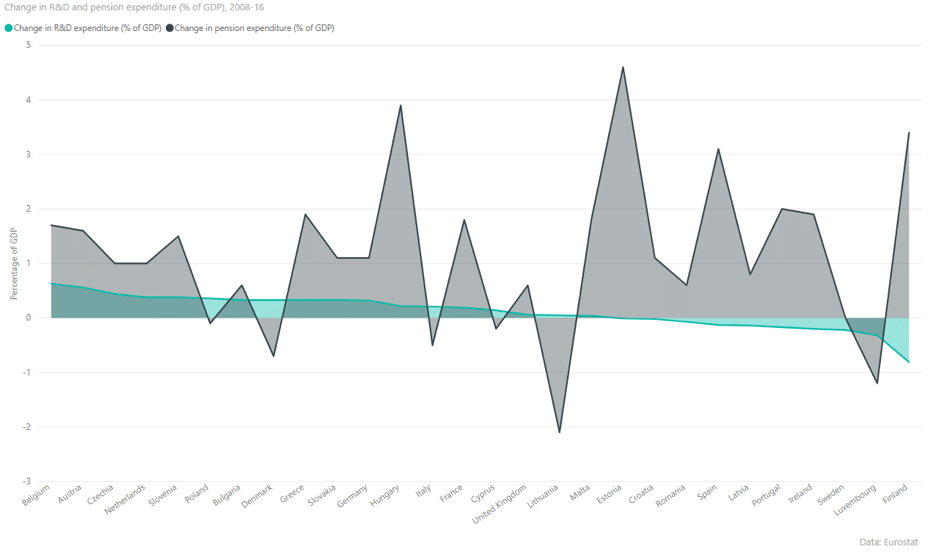 The percentage change is one aspect: the overall rate of expenditure is another.  Here there do seem to be some discernible groupings: