European Austerity and the Backlash 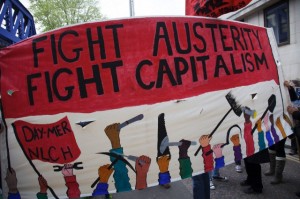 Obstreperous unions, an imbedded welfare system and incompetent civil servants have been obvious impediments to austerity in Europe, but the real problem with austerity is that it is a dumb idea. Economic growth is necessary to get deficits down and recovery depends on spending; so the real debate should be between those who believe government should engineer the recovery and those who think the private sector should take the lead.

Other than in times of war or other national emergencies, history has shown that the private sector is far more efficient than government, but that is alien to a Western Europe grown soft under bigger and more paternalistic governments.

Wikipedia defines austerity, in terms of economics, as “policies used by governments to reduce budget deficits during adverse economic conditions.” The obvious problem with austerity is that, in raising taxes, it prohibits growth from the private sector, and, in reducing government spending, it starves any growth from the public sector. Austerity makes the most sense during economic prosperity; however, during those years no one wants to put aside the fatted calf. Politics, as we all know, is a reactionary, not anticipatory.

The real causes of Europe’s problems lie in a welfare system that consumes an increasingly larger share of government’s budgets. It is unsustainable and, if continued unchecked, ultimately risks bankrupting individual nations. A question with no clear answer is, can Europe’s bloated bureaucracy deflate without causing collateral damage? Crisis is often needed to force change. The euro zone just reported its sixth consecutive quarter of negative GDP growth. Yet, with unemployment now higher in parts of Europe than it was during the Great Depression in the U.S., it does not appear that a crisis point has been reached. If the Mediterranean countries did not share a single currency with the North, it is my uneducated guess that currency devaluations would have improved their respective economies. But at this point, they are stuck with what they have.

While a social welfare system that has grown far more expansive and expensive than anybody imagined, especially in the Mediterranean nations, the single currency also played a role. When it was first issued, European banks, using depositors’ money, bought higher-yielding (and risky) sovereign debt from Greece, Italy, Portugal and Spain to boost returns. Elliott Morss, writing for Deutsche Welle (Germany’s international broadcaster), last week noted that those purchases had the effect of lowering interest rates, thereby giving those countries a green light to continue down their “unsustainable paths” of spending. Consequently, the Mediterranean nations got deeper in debt, while the banks of Northern nations had to write down or extend loans. Writing in Saturday’s New York Times, Steven Rattner noted: “The problems of the euro zone are not some routine cyclical downturn that can be rectified by traditional macroeconomic policy; they are deep structural flaws in both the design of the common currency and the economic policies of many of its members.”

The late British historian and essayist Tony Judt may have been premature (and wrong) when he argued that the European social model bound Europe in a way the American way of life could not. Nevertheless, his sensitivity to and understanding of Europeans was unique. Despite the disarray in Europe today, his history, “Postwar: A History of Europe Since 1945” should be required reading for anyone interested in the area. The study of European history over the past thousand years is the study of war. The last sixty-five years represent, I believe, the longest period of peace in the history of the region[1].

Europe’s social welfare system can take credit, at least in part, for that peace. The Continent had spent the best part of thirty years, during the first half of the 20th Century, embroiled in two world wars, leaving perhaps 100 million dead and millions more wounded and homeless. After years of turmoil, democratic governmental models that would provide social protection, full employment, social inclusion and democracy were like manna from Heaven. The reconstruction of Europe (with help from the United States by way of the Marshall Plan), an explosion in birthrates, an absence of protectionism and cheap energy, laid the groundwork for several decades of economic growth that allowed for paternalistic governments. But times changed. Beginning in the 1970s birthrates began to decline and populations began to age; the collapse of the Soviet Union brought forth an increase in global competition; Nixon’s decision to sever the connection of the dollar to gold gave reason for OPEC to impose an oil embargo and subsequent price increases. And, not unnaturally, wealth led to a rise in restrictive regulation.

Given a long history of nationalism and conflict in the region, dissolution of the European Union would not bode well for the area. There are those who feel the same way toward the sanctity of the euro. In an article on the future of the European Union in last Thursday’s Financial Times, Tony Barber wrote: “Most mainstream politicians share Ms. Merkel’s view that a break-up of the monetary union would shatter the wider process of European integration that has delivered peace and prosperity for more than  half a century.” I disagree. A failure of the euro would certainly be disruptive, but would not have the possibly fatal consequences as would a failure of the EU. The euro has been particularly good for Germany, as it has provided that country a “cheap” currency. In my opinion, the introduction of the Euro in January 1999 was effectively placing the cart before the horse. Political and banking integration should have either preceded the Euro, or should have occurred simultaneously.

Of the 27 countries in the EU, 17 have adopted the Euro. Estonia was the last, in 2010. The prolonged economic downturn has been felt unevenly throughout the euro zone. Interestingly, the European counties most severely impacted by recession are all members of the euro zone. The fact that they have no influence over monetary policy and little influence over economic policy would appear to be two reasons. However, to the extent that conflict over the currency renders the union less palatable would be tragic. Nevertheless, that seems to be happening. A recent Pew Research Center survey noted: “The prolonged economic crisis has created centrifugal forces that are pulling European opinion apart, separating the French from the Germans and the Germans from everyone else.” Centralizing more control in Brussels is appealing to Germans, but with Germany representing a third of Europe’s GDP, would not that be tantamount to giving Germany control over Europe?

Europe’s primary goal should be sustaining unity. It has been the EU more than the common currency that has been responsible for peace over the past sixty-eight years. It is now experiencing fractures. The promise by Britain’s Prime Minister David Cameron to hold an “in or out” referendum on EU membership after the next election “may,” as Bloomberg reported Tuesday, “have put the country on a course that will force it to choose.” According to a Pew poll, if the election were held today, the U.K. would likely leave. Only 26% of Britons think Europe’s economic integration has helped the economy and only 43% have a favorable opinion of the EU. The same Pew poll showed that only 41% of the French had a favorable impression of the European Union, a decline of 19 percentage points from a year earlier. Opinions in Italy, Spain and Greece were even less favorable. Germany, with 60% having a favorable opinion, pretty much stands alone.

Europe’s economy remains sluggish, despite easing by the European Central Bank and futile attempts at austerity. Economic growth depends on confidence and confidence descends from a belief that policies that favor private investment are not temporary in design. Reducing taxes and easing regulation would produce far more growth than giving economic reins to government bureaucrats. As in the United States, European nations must realize that changes in demographics, global competition and free trade have changed the dynamics of their economies. They must acknowledge that monetary policy alone won’t make things better. Fiscal reform must be implemented as well. They must also recognize that promises made to pensioners, left unchanged, can never be realized. There has been a backlash against austerity, deservedly so, in my opinion, and it could lead to a breakup of the euro zone; but Europe must be wary lest those breaks lead to dissolution of the Union and to a concomitant rise in nationalism.

“The Thought of the day” by Sydney Williams