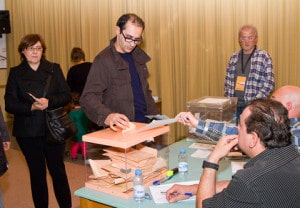 Regarding the results, several surprises have occurred:

Firstly, the party “ANO 2011”, supposed-to-be sovereign winner, did not score very well and got just 16.13 % (4 MPs), although various forecasts were prognosticating more than 20 % for this party leading by Andrej Babiš, popular billionaire and media-magnate. The 2nd highest volume of votes went to TOP 09, the party open to EU federalization – 15.95 % of votes mean 4 MPs as well. The Czech Social Democratic Party, the leader of the recent governmental coalition, took the third place (and also 4 MPs) with 14.17 % of votes.

Secondly, the low election attendance did not help to communists. Their electorate is usually very liable in terms of participation in elections. Nevertheless, Communist Party got “only” 166,478 votes which is a dramatic decrease in comparison with the 2009 election (334,577 votes). Communist party will have 3 chairs in the EU parliament which is the same number as “Christian and Democratic Union – Czechoslovak People’s Party”, a big rival of them reached.

Nevertheless, let’s end with a positive statement – The Free Citizens Party, a small, right wing and euro-skeptic party aiming for minimal state, more freedoms and more responsibility of individuals, has successfully overcome the 5% threshold and it is going to have its leader Petr Mach in The European Parliament. Nigel Farage will have a strong assistance in his famous discussions against the EU mainstream opinions.

The views expressed on AustrianCenter.com are not necessarily those of the Austrian Economics Center.
hayek_admin2019-01-14T06:17:45+01:00