Fait Accompli: Searching for Answers Where Answers Cannot Be Found

As it is widely expected, the ECB will unveil today its own version of QE. Welcome to a dead-end where central banks may resemble Prometheus bound by chains made by his own hands!

As I wrote late last year we may be entering a historical year where the greenback and gold could be moving upwards at the same time, proving that gold is simply another form of money, especially when central bankers are in an intense race of cheapening currencies. The expectation is that the ECB may announce a QE program which until the end of 2016 will “pump” close to $1.3 trillion via purchases of third-party liabilities (a.k.a. bonds) in the hope that this will revive the EU economy.

How the recycling of liabilities will revive a sclerotic and dysfunctional “union” is beyond any orthodox or unorthodox economic rationale. Here is why:

First, the sellers of the liabilities (such as banks) will receive electronic reserves rather than fresh-cut cash. Hence, while the monetary base might increase, the money supply may remain unaffected.

Second, given the nature of the interconnected global economy, money supply is endogenously determined by the demand for credit. In an EU-wide economy that suffers from over-regulation, high taxes, unsustainable debts, unfunded liabilities, and vested interests the last thing that economic entities would want is more debt. Therefore, the ECB may be facing a situation where supply of reserves may create less demand for credit.

Third, the enlargement of the ECB’s balance sheet at a time when the chain of confidence among central banks is broken (due to the unexpected suspension of the peg between the Swiss Franc and the Euro) could only signify the inauguration of a volatile period, as demonstrated by the fact that the franc’s volatility exceeded that or the ruble’s (see below). In fact as Simon Mikhailovich recently pointed out the volatility of the Swiss equities was equivalent to the Dow Jones losing 2500 points in its intraday trading! It would only signify schizophrenia if one thought that growth in incomes and jobs will be the outcome of such volatility. 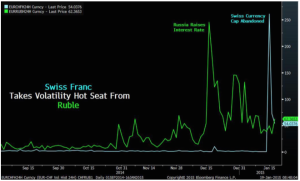 Fourth, while the market may temporarily jump on the news, they may soon comprehend the fact that interest-rate fixing not only distorts the natural order of financial markets but it is also unrealistic in the long run. Deflation is not the #1 enemy of the markets and especially of the Eurozone nowadays. The lack of structural reforms is the #1 enemy, where unsustainable debts eat away productivity growth and keep the economy bound around the nirvana of zero rates, which are unable to release Prometheus from its bondage.

Fifth, the restoration of competitiveness and growth requires specialization according to the endowments in each country. Without structural reforms that liberate entrepreneurial forces and create wealth and jobs, a Japanese-style of stagnation would probably be the outcome of ECB’s monetary experiment.

Sixth, even in the US the experimental QE programs did not produce any significant results until the Fed started reverse repos that converted reserves into money supply and credit. The ECB is far from implementing such a program simply because the capital markets in the EU are not as deep as the US markets, and also because EU entities rely less on the capital markets for their financing needs.

Seventh, the ECB may be playing with fire. If the Euro’s slide continues, capital flight may follow and with volatility rising at a time of higher risks and uncertainties, the liability-buying program may turn out to be an unfunded opportunistic mechanism that will destroy the “monetary union.” How in the world a “union” was attempted when by all accounts the Eurozone did not meet the optimal currency region requirements is still a puzzle.

Eighth, the ECB’s experiment will be unable to revive spending through the wealth effect, because any equities gains are not as widely spread among the population as they are in the US. Moreover, as financial suppression continues disincentives for savings prevail, which in the long term is a recipe for high financing costs.

Ninth, the contemplated requirement of sharing the risks with the national central banks (meaning that the national central banks would have to buy their countries’ debts) may turn out to be the Trojan horse for public sector haircuts for the over-indebted nations of Southern Europe. However, such Trojan horse may also lead to the split of the Eurozone which will be the beginning of financial and economic pains.

Tenth, given the brewing volatility and the declining prices in commodities, we cannot ignore the historical fact that in the post cold-war era, a gold/oil ratio above the level of 20 (meaning that 1 oz. of gold buys more than 20 barrels of oil) signifies the beginning of a challenging period for economies and financial markets. For the ECB to proceed with its convoluted QE it could possibly mean that it ignores the possibility that it is throwing gas on the fire. 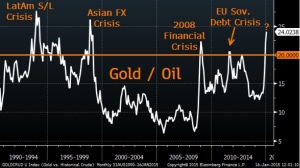 In any event, enjoy the ride!

The views expressed on AustrianCenter.com are not necessarily those of the Austrian Economics Center.
hayek_admin2019-01-14T06:06:52+01:00