We are experiencing a transformational change from post-modernity to meta-modernity. As that transformation takes place public philosophy, customs, policies and norms also change. The metamorphosis which is now at works may soon resemble the one described by Kafka in the sense that we may experience something that not only will it be unrecognizable but also dangerous. Modernity brought us freedom and progress in many fronts (economic, social, political, technological, etc.). Modernity advanced the march to a higher standard of living and promoted intellectual and democratic values and also elevated valuable institutions. Realism and pragmatism in our public discourse and polices are outcomes of modernity. Let’s not forget that Montesquieu’s concept of separation of powers is also the outcome of that era, as well as the works of Bacon, Galileo, Copernicus, Locke, Descartes, and many others. However, we do not argue that only positive things were produced by modernity, but this is not the forum to discuss that.

Modernity was succeeded by post-modernity in the last fifty years. The latter is a state of being where public discourse is creating the truth rather than discovering it. The anchors and standards are being abolished and the society’s norms and customs no longer comply with a linear evolution. It’s an era where dialectical relationships determine values, goals, and aspirations. In economic and financial terms the pivotal moment was when the dollar was delinked from its gold anchor in the early 1970s and the Bretton Woods system collapsed. By limiting ourselves to just the economic and financial spheres of post-modernity, we would say that post-modernity reflected an era where the world moved from crisis-to-crisis (oil, South and Latin America, currency, banking, Southeast Asia, Russia, tech bubbles, financial crisis in 2008, Eurozone crisis, to name just a few crises we have experienced in the last 45 years). In a nutshell it was an era where productive capitalism – that sees prosperity in the ability to produce – was replaced by financial capitalism where prosperity is viewed as the ability to accumulate debt and unfunded liabilities.

We are of the opinion that we are now entering the meta-modernity era, in which not just constant change and volatility will become the norm, but in which the traditional institutions that emerged as the powerful players of the last half a century may be questioned and their tools may prove to be inadequate. Meta-modernity has the potential to be marked as the era where hermeneutics of policies and norms will be crowned by superficiality. It could be an era where institutions do not seize or redeem the day, but rather an aroma of mortification replaces enchantment with funeral flowers.

A good number of articles and publications have been reporting lately that central banks may be running out of options and ammunition, especially if another crisis hits the global economy or a significant correction takes place in the markets. Some commentators are arguing that central banks still have options but not the conviction to use radical policies (such as helicopter money) that could offset the risks of a crisis or the turmoil resulting from a major correction. These commentators then, resolve to argue that central banks suffer from a “timidity trap” in the sense that they announce and follow sensible policies that are no longer effective in advancing growth and sustain a markets’ upswing.

Financial conditions are tightening as the graphs below demonstrate. In the first graph we observe that credit standards are being tightened in different credit markets, while in the second we observe that the cost of insuring debt (CDSs) is rising. The rising stress level in credit markets along with the inability of the economy to grow at its potential (let alone the EU economy that barely records any growth rate) are indicative that we may be entering into this meta-modernity era. 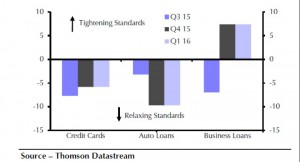 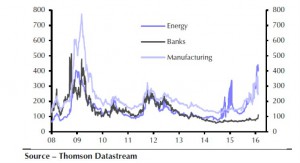 We are of the opinion that this tightening is a symptom of rising unbalanced risks in the global economy that mainly have to do with unsustainable debt levels, an inability to advance growth and the interests of the middle class, as well as the re-hypothecation of assets that has been generating collateral holes and hence squeeze growth prospects due to a divergence between the real and the financial economy.

We believe that as the gap of such divergence grows so do the risks of a major crisis that will set back both the real and the financial economy for years to come. Maybe that too could be the outcome of a cultural norm that in its dialectical schizophrenic mania embraces a state of being where empathy and apathy, sincerity and hypocrisy, affection and indifference are pursued simultaneously.

Welcome to the era of helicopter money.

The views expressed on AustrianCenter.com are not necessarily those of the Austrian Economics Center.
hayek_admin2019-01-14T05:57:16+01:00