Financial Stress and Expectations: The Story of Developed Markets.

As we reported in our Weekly Market Update over the weekend (http://blacksummitfg.com/wp-content/uploads/2015/08/BFG-Weekly-Brief-August-29-2015.pdf), the US and the EU equity markets experienced one of their most volatile weeks. Over the course of two-three days more than $6 trillion of paper wealth was wiped out, only to be mostly recovered in the following few days. When we compare the losses with the size of the QEs, we may get a sense of the marginal future ineffectiveness of central banks when volatility starts shaking the markets badly some day in the future.

However, the purpose of this commentary is not to reiterate the fragility of the markets, something that we have explained before. Our objective with this commentary is threefold: First, to state a few things about China. Second, to make an effort to understand the short and medium term prospects of developed and emerging markets given the recent developments. Third, to integrate the above two points into the prospects of corporate credit markets.

Let’s start with China and its foreign reserves. In the last few weeks, those reserves have been bleeding. The reasons are at least three: First, as the Chinese slowdown accelerates, those holding the reserves (especially corporations and households) are seeking ways to preserve their capital. Second, as the Yuan is being devalued, now is the opportune time to send capital abroad (let’s not forget that part of the accumulation was based on the expectation of a Chinese revaluation, which did take place by about 30% over the last two and an half years). Third, the Chinese authorities in an effort to make the Yuan a member of the select team of fiat currencies that serve as international reserve currencies, have to let market forces determine its value. Hence, we expect that a good chunk of the vast amount of savings (see graphs below) in the Chinese official and shadow banking systems will find exit venues. 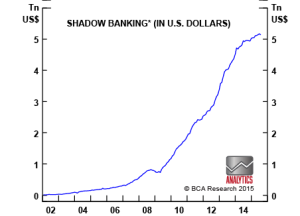 As those savings find their way out of China, they will boost developed markets, while continuing to shake the Chinese and other emerging markets. As that rebalancing act takes place, volatility will continue in both markets. Specifically, we expect that the Yuan may lose another 8-10% of its value against the USD and the Euro, while emerging equity markets may also suffer another round of declines.

However, as those rounds of currency depreciation take place and emerging market equities suffer losses in the short term, the turmoil itself may become the energizing seed that will attract capital and which in turn assist both China and other emerging markets to avoid a hard landing. We are of the opinion that if this scenario materializes, then Chinese and other emerging markets may be attractive for individual and institutional investors. (Chinese H shares trade at about 6.9 forward earnings and one time book value).

Turning now our focus to developed markets, we do not believe that the recent volatility is quite over yet. As long as the Chinese quakes take place and given the fragility of the financial markets due to their credit overextension, equity markets in both the US and the EU are susceptible to more volatility. However, any future correction will be moderated by the capital infusions from China and other emerging markets as well as by robust corporate earnings. Therefore, we will not be surprised if the final quarter erases the losses of the US equity markets, and the latter end up with some low but positive gains for the year. As for the EU equity markets, we expect them to do slightly better than the US markets mainly because of Mario Draghi’s monetary measures.

Closing this commentary, and per our introductory note, here is what we believe regarding corporate bonds, given our analysis above: It is a fact that spreads have widened given the recent volatility. Those spreads (between the US Treasuries and corporate bonds, especially high yield bonds) may widen further if volatility temporarily persists. However, this is projected to be an ephemeral phenomenon, which leads us to believe that corporate bonds may be an attractive field of parking cash.

This article was originally published on The Black Summit Financial Group.