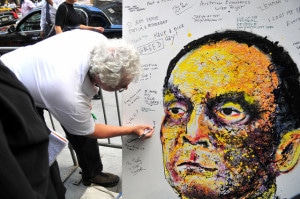 The cover of New York magazine, for the issue dated September 29, 2008, depicted a trader on the NYSE, his right hand covering his face, which has been thrown back in despair. The lead article was entitled “The Great Shakeout: Goodbye Masters of the Universe, Hello Ron Hermance of Paramus, New Jersey.” The piece, written by the inimitable but often fallible Jim Cramer, described the demise of Wall Street as it was known and the rise of a new George Bailey, Ron Hermance Mr. Hermance was then president of Hudson City Bancorp. (Today he is chairman.) Mr. Cramer noted that as Lehman ceased to trade, Hudson City (HCBK) was hitting new highs.

Five years later, Hudson City Bancorp is selling at half the price it sold for in September 2008, while JP Morgan Chase, Goldman Sachs, Wells Fargo and Morgan Stanley are all trading above where they were at that time. (Bank of America and Citigroup, it is true, remain considerably below where they traded in the fall of 2008.) It all suggests conventional expectations are often wrong, and what looks to be a rising star may only be a flickering candle. Mr. Cramer was right in the sense that some of Wall Street’s swagger has been tempered, but it has not been eviscerated, as the tale of the “London whale,” Bruno Iksil, relates. Nevertheless, banks are better capitalized than they had been. In the September 7 issue of The Economist, it is stated that America’s big banks have risk-weighted capital of 13%, far above the 6% Basel III requirements and 60% higher than the pre-crisis levels. However, the definition of “risk-weighted” can be vague and is nowhere etched in stone. In the meantime, big banks have become even larger, meaning that their collapse would be even more devastating. When the crisis hit five years ago, the four largest banks – Bank of America, JP Morgan Chase, Citigroup and Wells Fargo – held about 35% of all banking assets. Today those four banks hold a bit more than 55% of the roughly $13.7 trillion in bank assets.

On Sunday, September 14, 2008 Lehman declared bankruptcy, adding gasoline to tinder that was already burning. “It (Lehman’s bankruptcy) was,” as Hank Paulson wrote recently in Bloomberg Businessweek, “a symptom, not the cause.” The entire process, over the previous twenty months, had been like watching an accident occur in slow motion.

In February 2007, Freddie Mac announced that it would no longer be buying the riskiest subprime mortgages. Two months later, New Century Financial, a subprime mortgage lender, filed Chapter 11. In July of ‘07, Countrywide Financial warned of “difficult conditions.” That same month Bear Stearns announced they were liquidating two hedge funds that invested (speculated?) in mortgage securities. The next month another lender, American Home Mortgage Corp., filed Chapter 11. During that summer of 2007 the Federal Reserve began lowering the Fed Funds and Discount rates. In October, incredibly, the stock market hit all-time highs! In January 2008, Bank of America bought the floundering Countrywide Financial. In March, Bear Stearns was saved from liquidation at the last moment in a shotgun marriage with JP Morgan Chase. By early September Fannie Mae and Freddie Mac had been forced into conservatorship. On the day that Lehman filed bankruptcy papers, Bank of America was arm-twisted into buying Merrill Lynch. Two days later AIG was rescued with an $80 billion taxpayer-funded bailout that gave government 80% ownership of the company. By the end of September Washington Mutual and Wachovia were sold, as they were failing. Goldman Sachs and Morgan Stanley were converted into commercial banks, providing them access to the Fed’s discount window. In October, the Federal Reserve began paying banks interest on reserves, as a means of encouraging them to strengthen their balance sheets, but effectively paying them not to lend.

A TARP (Troubled Asset Relief Program) Bill passed in Congress on its second attempt, and almost immediately had to change its purpose from buying assets to injecting capital directly into banks. It was critical that the system be saved. The consequences would have been unimaginable. In the same article mentioned above, Mr. Paulson wrote: “I was never able to convince the American people that what we did with TARP was not for the banks. It was for them. It was to save Main Street. It was to save our economy from catastrophe.” It was the paying of the huge bonuses to certain bank executives that rightfully angered the American people. Paulson agrees: “That infuriated me – the sheer cheekiness of it. Forget whether they were legally entitled to their bonuses, it was such a graceless lack of self-awareness and a total lack of understanding about how the rest of the world and the rest of America looked at them.” This hubris persists and represents a character flaw that unfortunately permeates much of our culture, not only on Wall Street but in the media, the entertainment world and, most glaringly, in Washington.

For those of us who were mere cogs among the large wheels of finance, those weeks cast an eerie spell. On the Tuesday morning following Lehman’s announcement, I wrote in a TOTD: “It was…the sense of helplessness – that factors not only beyond our control but beyond our understanding are at the root of the problem.” The next day I wrote that these events seem like “a series of controlled explosions.” But by mid November I was more optimistic. Markets were adjusting to the new reality. Three-month Treasury bills were yielding 12 basis points compared to 171 basis points at the end of June and 91 at the end of September. The S&P 500 had declined almost 40% from the end of June. The yield on the Bloomberg High Yield Index was approaching 25%. On November 19th, I noted that some investors who had been bearish for years – people like Seth Klarman, Jeremy Grantham and James Grant – had been making some positive overtures. It was four months too early, but their attitudinal changes proved prescient.

It is the lessons to be learned from that period that should not be forgotten, in particular the role played by all of us – consumers, bankers, politicians, investors and homebuilders – in either helping cause or allowing the conditions to develop as they did. Most of us danced to the tune of easy money for little risk. And we learned the hard lesson that there is no such thing as a free lunch, whether it is offered by your local banker or your favorite politician. A re-reading of Stephen Vincent Benet’s The Devil and Daniel Webster is a reminder of pacts made with the devil. Such options are never rewarding. In doing so, we ignore the negative consequences because they seem remote and unlikely. An old adage says, “If it sounds too good to be true, it probably is.” That does not mean we should not take risks. There are times when we should, but it is equally important to consider and reflect on human behavior. When everyone has moved to the port side of a ship, it probably makes sense to cling to the starboard rail.

As well, we should not forget the role played by those who helped extricate us, preventing what easily could have become a far-worse disaster. As I have written often, then Treasury Secretary Hank Paulson, Federal Reserve Chairman Ben Bernanke and then president of the New York Fed Timothy Geithner, supported by the Bush Administration, saved us from what could have been a far more calamitous outcome. They deserve our applause. Could they have done things differently with better outcomes? Possibly? But what they did worked, which has allowed many of us the liberty to bellyache about unintended consequences. Monday morning quarter-backing is fine for chowderheads and even for those who seriously study the past that it might allow them to gain better insight into the future. But those who re-write history for political or financial gain do themselves and the rest of us a disservice.

With little reason to credit government, we are in a better place. That is because common sense does, at times like those, dictate behavior. Government’s response, as it always is in times of crises, was to add to the bureaucracy through more regulation – creating rules designed to abort the most recent crisis, rather than to prepare for future disasters. Dodd-Frank, as I wrote on Friday, is tediously cumbersome. It is laden with 400 separate provisions, to be monitored and regulated by overlapping agencies. It is a dream for lawyers, but a nightmare for practitioners. Skepticism has largely replaced complacency, certainly as far as leverage is concerned in banks and among consumers. However, the risk of moral hazard remains, but today assumes a different form. Banks were bailed out, but what happens to promises today by governments to their employees – the overwhelming problem of unfunded liabilities? What about government’s promises to the elderly or to those in need of government sponsored healthcare or our veterans? What about student loans, assumed because of an implied promise made to the young that a college education is necessary to achieving the “American dream.” Instead of realizing that dream, about a quarter of today’s college graduates and dropouts are living at home, while earning the minimum wage. What about union leaders who have made promises to their members that taxpayers may not be able to afford? We persist in a Walter Mitty-like world. This time, however, the excesses are in Washington, not Wall Street or Main Street.

In last Friday’s Financial Times, Gary Silverman noted that that era (the late 2000s) was “marked by the decline in relationship banking,” and that, “in its place less, less personal market mechanisms grew in importance.” “Relationships,” Mr. Silverman wrote, “had duration.” In that regard, we are worse off than five years ago. Today we are talking about durations that last as long as a high frequency tr