Four People to Blame for the Crisis in Iraq 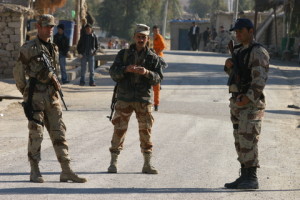 For Iraq, June has been the cruelest month. The jihadist group Islamic State in Iraq and Syria (ISIS) has made incredible gains in Iraq. On June 5, ISIS fighters briefly seized Samarra before being pushed back by Iraqi government forces. On June 10, ISIS seized Iraq’s “second city,” Mosul, on the crossroads between Iraq and Syria, another area of operations for ISIS. On June 15, ISIS claimed to have captured and killed 1,700 Iraqi soldiers in Tal Afar. A few days later they attacked a major oil refinery north of Baghdad, one that was responsible for about 25 percent of the country’s domestic oil consumption. As Iraq verges on the brink of civil war, there’s a cornucopia of Iraqi and foreign figures who could be blamed for the unfolding disaster. Here are four: Continue to the full article……..

The views expressed on AustrianCenter.com are not necessarily those of the Austrian Economics Center.
hayek_admin2019-01-14T06:16:29+01:00