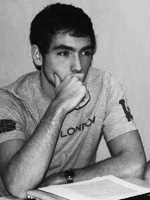 Franco Martín López is an advanced student at the School of Architecture of the Universidad Abierta Latinoamericana (Rosario, Argentina). López belongs to the NGO “Orillas” –which gives educational support to underprivileged children in Argentina. In 2013 he was awarded the 2nd Prize in the VI “Alacero Contest” organized by the Latin American Steel Association.

Abstract: The functioning of cities demands a complex network, which is typical of emerging systems and consists of knowledge and human relations and interactions. Said spontaneous structure is seriously affected when the interventions distinctive of centralized urban planning create, void and reorganize existing connections, which sustain the city’s functioning, disregarding the citizen’s local knowledge and the spaces they formed in buildings and other areas.

Recension: In face of the short deadline for the first two papers, we declared to be open to publish other topics first, in particular if they excel in originality, clarity, and scholarliness.

The first entry selected and published this year excels in all these respects.

While the first referred to the dispersed character of knowledge as the main reason for the impossibility of central economic planning, the second made a similar argument for the fatal attempt to centralize urban planning.

In the spirit of Alexander, López says, ‘cities shape a complex human network that is out of reach of a centralized planner.’ And he continues, ‘being the creative, productive and social centers that differentiate them from any other inhabited territory, [cities] require the highest possible degree of freedom in their natural conformation and structure. This complex human network consists of a series of relations, interactions and «particular knowledge of the circumstances of time and place» […] that we will call «local knowledge».’