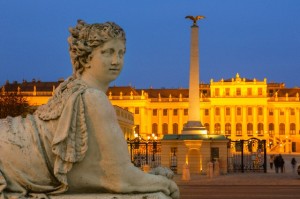 The most important European and US – Think Tanks are meeting in Vienna.

Before the introduction of the concept of free cities, Georgia already was one of the freest and most open nations, with no immigration restriction, little labour market regulation and several free industrial zones. Yet, the country did not take off economically. Jandieri named problems of ex-soviet countries as the main reasons: no respect of property and individuals, no culture of cooperation, great distrust in the corrupt judiciary and no respect for rules and laws. Lazika, the free city to serve as a model for the whole country, introduced the common law system and lowered taxes.

The Cayman Islands were not an attractive island, so innovation was needed: a good banking law was written, Cayman became first a banking, then an insurance and later on THE off-shore financial center. Tourism developed as a second economic branch and is well complementary with the needs of the financial industry. The Rule of Law and the Common Law system fueled this development, so did the tax system: The Caymans are not a tax-free country, but “they stayed away from the most dangerous tax, which is individual income tax and and corporate tax”, focusing on indirect taxation.

Cities have always been drivers of trade, particularly those on coastlines, also in the past: “Malaga was a medieval Ebay in the tropic”, now, those coastal cities are the outstanding points along global supply and value chains. Singapore and Hong-Kong both have a very limited welfare state, public spending only amounts to 20% of GDP, there are no uncovered future liabilities like pensions or health entitlements. Both city states have free ports and are extremely open to foreigners and direct foreign investments, which induces innovation and entrepreneurship.

“Why did Europe get rich, when the rest of the world didn’t? Because there were small competing jurisdictions!”
Like in any market situation, tax competition will lead to a more “consumer”-, or rather citizen-friendly environment, only competition brings about a “sovereign consumer”. Governments strongly discriminate against free cities, even the WTO called on free cities, accusing them of “distorting competition”, high-tax nations “fear free cities”.Yet, free cities would be a positive example and force western politicians to make the right decisions and finally undertake the necessary reforms.

The views expressed on AustrianCenter.com are not necessarily those of the Austrian Economics Center.
hayek_admin2019-01-14T06:46:02+01:00