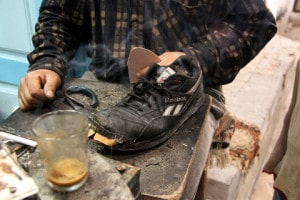 2014 marks the 50th anniversary of the War on Poverty, and many claim that President Johnson’s program has lifted millions out of poverty. But if we really want to help the poor, research suggests that economic freedom does more than government aid.

Economic Freedom Within the United States

In “A Dynamic Analysis of Economic Freedom and Income Inequality in the 50 States: Empirical Evidence of a Parabolic Relationship,” Daniel L. Bennett and Richard K. Vedder argue that, past a certain point, economic freedom decreases inequality. Increasing economic freedom benefits the poor and middle class more than it helps the wealthy.

But does income inequality decline because the rich lose wealth (perhaps through fewer opportunities for crony capitalism), or because the gains from increasing economic freedom go primarily to the poor? In “Income Inequality and Economic Freedom in the U.S. States,” Nathan J. Ashby and Russell S. Sobel find that it’s the latter.

Ashby and Sobel analyze the 48 states of the continental United States in terms of their economic freedom and the incomes of their poor, middle-class, and wealthy residents over 20 years (from the early 1980s to the early 2000s). They use the same measure of economic freedom as Bennett and Vedder.

The authors find a strong positive correlation between a state’s economic freedom and the income level of the poorest 20 percent of residents. Freer states did better by their poor than less free ones. In particular, Ashby and Sobel found that increasing the economic freedom of a state by one unit (equivalent to moving from 40th-freest state to 7thfreest-state) increased the incomes of its poorest residents by 11 percent. By contrast, the same change increased the incomes of the richest quintile by just over a third of that (4.3 percent). The middle class also saw increases, greater than the rich but less than the poor. Increasing a state’s economic freedom by reducing taxation and regulation creates broadly shared prosperity across all quintiles. Their research helps explain why, as states become more economically free, their income inequality declines: The poor and the middle class see more gains than the wealthy.

But couldn’t this be a case of mistaken causality? Maybe some states have less poverty because they have more natural resources. With less poverty, they need less government to help the poor, meaning they’re economically freer. But Ashby and Sobel anticipated this claim. They control for about a dozen variables, including education, geography, and median income. The last controlled variable is especially important; it places richer and poorer states on a level playing field, so to speak, for the study. It combats the idea that perhaps wealthier states need less government because they have less poverty, and firmly points the arrow of causality toward economic freedom reducing poverty.

Ashby and Sobel’s research is a compelling argument against government poverty programs. Other research, for instance the Mercatus Center’s Freedom in the 50 States annual report, notes the positive effects of economic freedom on aggregate economic growth. But because their data is left in the aggregate, it’s difficult to determine to whom exactly the economic gains go. But by breaking down their research by quintile, Ashby and Sobel make a case that economic growth especially helps the poor.

Nor is the connection between economic freedom and bottom-rung prosperity unique to the United States. Recent research in the Economic Freedom of the World (EFW) 2013 Annual Report finds the same trend internationally.

The Economic Freedom of the World (EFW) Annual Report, published by the Fraser Institute, analyzes around 150 countries in terms of factors like their economic freedom, closeness to a laissez-faire state, poverty levels, and per capita income. The results are a striking indictment of the idea that more government intervention in the economy can help the poor.

As EFW points out, the shares of a country’s GDP going to the bottom 10 percent are pretty consistent regardless of how free the country is. From communist states to progressive countries to almost laissez-faire societies, the poorest 10 percent of citizens receive about 2.5 percent of the country’s wealth. No amount of progressive policies has changed that number. But for the poor, life is still much better in an economically free country than in one with more government. More economically free countries have more wealth than less free ones, meaning the poorest 10 percent can end up with thousands of dollars more per year. The poorest citizens of the 25 percent most-free countries earn an average of $10,556 per year. The poorest citizens in the middle 50 percent of countries earn less than a third of that.

So why does more economic freedom mean less poverty? The answers are well-known to libertarians, but worth reviewing. In societies with more economic freedom, decreased taxes and regulation make it easier to accumulate savings and to start or expand a business. Today in the United States, getting permits and navigating the legal maze to start a business can cost tens of thousands of dollars. Getting the permit for a food truck, and complying with the various laws, can cost $15,000 at the high end. Regulations in the United States overall cost about 1.5 percent of the country’s income per capita. But in other countries this cost is even higher; in Germany regulations sap 4.7 percent of the nation’s income per capita. In Italy it’s 14.2 percent.

Some of these regulations drain money from existing corporations, leaving them with fewer funds to expand; others impose hefty costs on anyone wishing to start a business. Both ultimately discourage wealth creation. Countries or states with more economic freedom therefore have more jobs, more innovation, and more goods and services—ultimately more wealth—than societies burdened by a heavy government.

As we approach the 50th anniversary of the War on Poverty, legislators would do well to bear these data in mind. The cure for poverty is not more well-meaning government programs to make the United States resemble Europe. The solution, as it has always been, is more economic freedom.

The views expressed on AustrianCenter.com are not necessarily those of the Austrian Economics Center.
hayek_admin2014-03-11T10:02:20+01:00