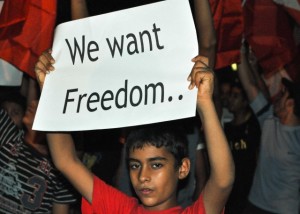 by the The Freedom House.

Bringing light to the dark Corners of the world.

Overwhelming credit for Libya’s achievements must go to those who risked and in many cases lost their lives by rebelling against the brutal rule of Mu’ammar al-Qadhafi.

“Among the findings of this report, none is more surprising than the fact that Libya registered by far the most impressive gains in its level of freedom for 2012. Each spring, Freedom House publishes a supplemental report that shines a spotlight on the world’s most repressive regimes—the worst of the worst. And until the uprising in 2011, Libya was a perennial member of that appalling group. Now, after months of civil war and over a year of tenuous nation building, Libya has an elected government, comparatively wide-ranging freedoms, and a leadership that seems committed to accountable rule and openness.”

“Other postrevolutionary governments have begun well and ended poorly, and the Libyan experience with freedom could go awry. Clearly there are forces, both in Libya and in its neighborhood, that are hoping for failure. But for the time being, the country qualifies as a success story that deserves the support of freedom’s advocates everywhere.

While the Obama administration has instituted changes in the country’s antiterrorism effort, a number of controversial policies are still in place. The president has been criticized by civil libertarians for the United States’ expansive use of unmanned aircraft to kill suspected terrorists and allied militants—including U.S. citizens—in Pakistan, Afghanistan, and Yemen. Neverthe-less, Obama’s approach to the war on terrorism generally enjoys bipartisan support from the American people and members of Congress.

There is thus a critical need for leadership from the United States and other democracies. In the United States, the reluctance to provide that leadership represents a rare case of bipartisan agreement. President Obama has made clear his desire to focus on domestic concerns; the Tea Party wing of the Republican Party has fixated on across-the-board reductions in spending, including on foreign assistance; libertarians, also a growing influence in the GOP, are hostile to the very idea of American global leadership; and even the party’s leaders now seem ambivalent about America’s role in the world. In Europe, the leading states are weighed down by the financial crisis. Meanwhile, rising democratic powers like Brazil, South Africa, and India have shown a profound aversion to condemning governments in other developing countries, including those that routinely commit atrocities against their own people.”

Read the whole Report: Freedom of the world 2013″

“The Freedom house“ is an independent watchdog organization dedicated to the expansion of freedom around the world.

The views expressed on AustrianCenter.com are not necessarily those of the Austrian Economics Center.
hayek_admin2019-01-14T06:43:27+01:00