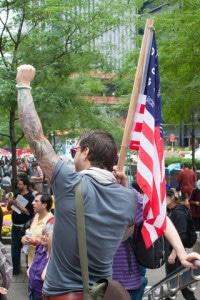 If Michael Moore would study a little political economy he might turn into a potent champion of individual liberty.

As we see in Moore’s new movie, Capitalism: A Love Story, Moore is offended by some truly offensive things: banks engaging in wild speculation without concern for the risk, taxpayer bailouts for banks and other businesses, cozy relations between Wall Street and Washington, politicians getting favors from companies that want benefits from government, and big institutions pushing less powerful individuals around. True, he’s offended by some inoffensive things as well, such as the cut in the 90 percent top income-tax rate nearly 30 years ago. But by and large, what he rails against should be railed against.

(Update: Moore gets the tax-rate story wrong, and I let it get by me. The 91 percent top marginal rate fell to 77 in 1964 and 70 in 1965; this was the Kennedy tax cut — I wonder why Moore didn’t say that Democrats John Kennedy and Lyndon Johnson were the rate cutters. Under Republican Ronald Reagan, whom Moore wishes to demonize for cutting taxes for the rich, the rate dropped to 50 and eventually to 28 percent. HT: Gary Chartier.)

Had he called his movie State Capitalism: A Love Story, I might be applauding (with some reservations). But he’s targeting the more ambiguous “capitalism,” which he uses interchangeably with “the free market.” He can be forgiven for this, however. Most people would say that the current U.S. economic system is capitalist. Moore has probably heard that all his life. He’d hear if he watched a Fox financial program. Would Ben Stein or Lawrence Kudlow disagree? Moore has also heard Republican politicians, George W. Bush, for example, praise the existing system, with all its deep government interventions, as capitalist. He did this even as he and Treasury Secretary Henry Paulson, former chief of Wall Street behemoth Goldman Sachs, stampeded Congress into passing the $700 billion TARP bailout last year. Moore takes such people at their word: The free market is capitalism, and capitalism is what we have today.

Can we blame him for thinking this way?

Yes, it’s sloppy thinking, and had he been more curious and read beyond the confines of “Progressive” literature, he could have gotten the straight story. But many knowledgeable advocates of the free market contribute to the confusion by exhibiting what Kevin Carson calls “vulgar libertarianism,” or what Roderick Long describes as “the tendency to treat the case for the free market as though it justified various unlovely features of actually existing corporatist society.” How often have you heard a free-market advocate condemn pro-business intervention in one breath, then defend existing dominant corporations in the next — as though they did not arise in the interventionist environment just condemned? Pro-market is not the same as pro-business. If some market advocates don’t understand that, why should Moore? Vulgar libertarianism is a disconnect that makes the free-market philosophy look like a corporate apologetic. It’s done incalculable damage to the cause of freedom, in part by alienating potential allies. Who knows, maybe even Michael Moore.

This may go a long way in explaining Moore’s aversion to profit — at least other people’s. He associates profit with business, which he associates with (state) capitalism. So for him, profit per se is suspect. But he should see a problem here. Does he think he’s exploiting moviegoers when his production company ends up with a profit? Do the co-ops and worker-owned firms he loves exploit their customers when they sell their products for more than their money costs? When two people barter, are they mutually exploiting each other because each gets more value than he gives up? To consistently oppose profit, one would have to oppose all human action, since every action aims at a surplus of subjective benefit over subjective opportunity cost.

Cornered like this, Moore might say he’s only the against excessive profits that capitalist market power permits. But now we’re back where we started. To the extent that intervention hampers competition by erecting barriers to entry — which is the usual effect, intended or not — protected firms are free to charge higher prices and reap more profits than would have been the case in an open market. Corporate power and privilege derive from political power and can’t exist without it. In contrast to existing capitalism, the truly free market would have no legal barriers to competitive entry, assuring that prices and returns are economically justified and not the fruits of privilege. Strictly speaking, entrepreneurial profit in a true market gets competed away because the very process of capturing them reveals valuable information to others and invites imitation. It takes innovation and efficiency — that is, superior service to consumers — to create new profits. Only the State permits business to make profits by withholding benefits from consumers.

But Moore doesn’t know this. What he “knows” is that the choice is between the current corrupt system — and it is corrupt — and some vaguely defined scheme of control by benevolent politicians, which he calls socialism and democracy.

In his movie Moore expresses affection for socialism, but he’s not clear what he means. He never advocates collectivization of the means of production or the abolition of markets. Instead he suggests that socialism means workers having a say in how the companies they work for are run. But why assume that’s anti-free market? He praises worker-owned companies and notes that hundreds of them exist in the United States today. He might be surprised to learn that these things are entirely compatible with the free market. In fact, it’s a perfectly libertarian intuition to abhor being subject to the arbitrary whim of anyone — yes, even a private employer. If government regulatory and tax obstacles to new competition and self-employment did not exist, workers would have their maximum bargaining power and widest array of alternatives. I imagine we’d see more departures from the traditional firm. People used to get their “social insurance” from mutual aid societies. Maybe in a true free market, we’d see a bigger role for the employment counterpart to these public, yet not governmental, organizations.

What would Moore think about a system in which no one could collude with politicians to legally plunder the rest of us for their own benefit and everyone was free to enter into any cooperative arrangements to produce and offer goods to others in voluntary exchange? Michael, that’s the free market!

Of course, Moore naively looks to government to provide things. His movie laments that FDR died before he could see his Second Bill of Rights enacted. Roosevelt wanted government to guarantee everyone a good education, job, home, health care, and so on. Has Moore ever wondered where government would get the resources for this? He can’t really believe that somewhere there’s a massive pot of collective wealth waiting to be distributed. He must realize that the tax system would provide the money. But how can he not know that if government appears to penalize wealth creation with confiscation, less wealth will be created?

Moore is unaware that he commits the “Nirvana fallacy.” This is the erroneous idea that our choice is between the admittedly imperfect world we’re bound to live in if government leaves us alone and an imagined utopia in which benevolent and all-wise rulers oversee and regulate everything. Of course that is not the choice. Moore’s preferred system, whatever he calls it, would be run by individuals whose insight into the public interest would be no sharper and whose motives no purer than other people’s. However, since they would wield political power — which is the legal authority to compel obedience– they would be far more dangerous than anyone in a free market could ever be. He knows how corrupt politicians are. Why does he think different people would run things in his utopia? Does he really want them in charge of everyone’s job, education, health care, housing, pension, and the rest? It’s hard to understand why he isn’t uncomfortable with the idea of the people being tenants and employees of the State.

Whether he realizes it or not, Moore favors a system in which an elite necessarily would make critical decisions for the rest of us. He’d be incredulous to hear that, but if he ever comes to understand it, libertarians might end up with an unlikely ally.