Germans Are Heading to the Polls: A Preview to the 2017 Election

The 2017 German federal election is almost upon us: This Sunday, September 24, Germans will go to the polling booth and vote for their representatives in the Bundestag, i.e. the parliament, and eventually, their Chancellor.

With that, it’s high time to take a close look at what will, could, and should happen on Sunday.

In the most recent poll (as of this writing), the result is predicted to be as follows: 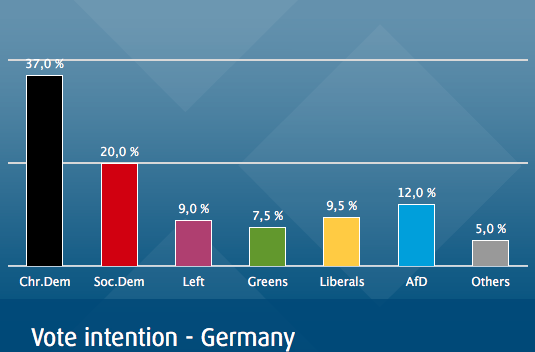 There are, however, notable discrepancies between different polls. In all likelihood, the CDU and its Bavarian partner, the CSU, will finish between 35 and 40 percent, the SPD in the 20 to 25 percent range, and the remaining four parties all around ten percent. (There are certainly more than these six parties running, but all others will finish easily below the five percent threshold.)

2. Everything Will Stay the Same…

“The race for first place is over, Angela Merkel will stay Chancellor.” This came from Christian Lindner, the leading candidate of the FDP, seven weeks before the election. The outcry of all other parties and the media was big – how could he say such a thing? – but it’s nonetheless true.

It has been clear for quite a while: The CDU will win in a rout and Angela Merkel will stay Chancellor for a fourth term – and it won’t even be close. Meanwhile, the SPD will further slump at around their new 25 percent normalcy.

In this sense, everything will stay the same. And since this was clear already weeks and months before the election, the campaign has been quite a bore. Angela Merkel and the CDU have tried to win over voters the same way they have done since the Merkel era began: they bring stability, they are in the center, the prosperous times Germany has had under Merkel will just continue. 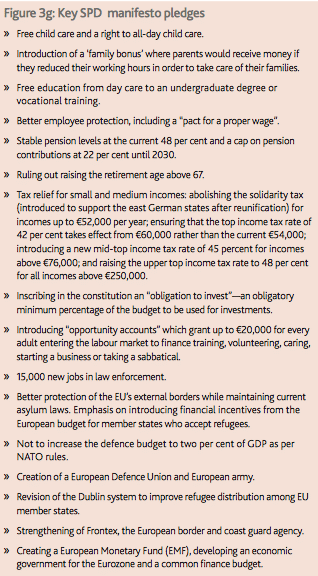 Yes, there will be some “minor” crises like having to bail out Greece, adopting a costly energy transition, or subsidizing a huge artificially created migration wave, but otherwise it’s been pretty great, right? And so it is no surprise that the “conservative” CDU has changed its slogan from “Die Mitte” – which literally means “The Center” – to “So that Germany continues to be governed well” (yawn).

To find the reason why this approach has worked, one has to look no further than to Merkel’s opponent from the social democratic SPD: Martin Schulz. Schulz is a textbook example of a Eurocrat. After being mayor of the small city of Würselen (a position he got elected to unopposed and where he sunk millions), he became a MEP at the European Parliament in 1994. Since then, he lived exclusively in Brussels, and from 2012 onward was President of the Parliament.

He stepped down early this year, because suddenly he had a bigger task at hand: becoming Chancellor. It didn’t look bad at first, and in spring he was head-to-head with Merkel – people already spoke of the “Schulz effect.” But that short success story probably only came about because not too many Germans even knew him – he was a mysterious, exciting new guy. When voters got to know him, though, it quickly turned around.

Admittedly, it is a tough job to campaign as the man of the people, of the workers, and the unions, if you lived on taxpayers’ money a few hundred miles away from your people for more than two decades. Not even all the free goodies you want to hand out help anymore in this situation (see box on the right which the Legatum Institute compiled in their great election preview).

As much as will stay the same, there will still be significant changes come Sunday. For that we need to look at the current seat composition of the Bundestag: 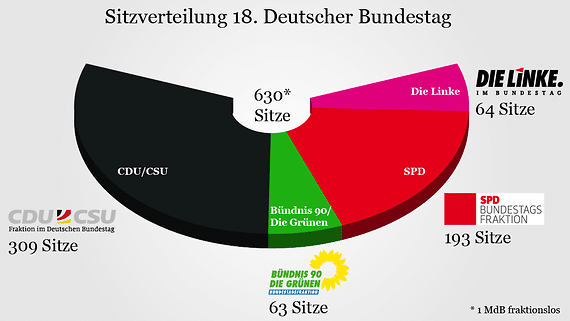