The Germans Who Stood Against Hitler

This is a book review to “Bonhoeffer: Pastor, Martyr, Prophet, Spy“, by Eric Metaxas: 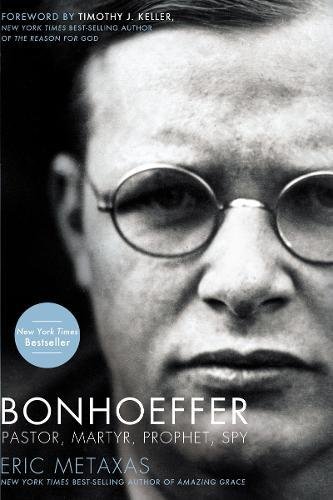 The Nazi regime left a hauntingly tragic mark on the civilized world. The horrors and misery of that period have scarred the soul of humanity. As mankind moves further and further away from that dark stain in its history, the vivid and sinister memories of the Nazi experience shall forever be kept in the memory of those who dream of an existence in which such cruelty is never repeated.

Yet, there may be many who forget or are unaware that even though the origins of the Third Reich had come out of Germany, so too had many attempts by members of the German people to stop it, and this from quite an early stage.

Bonhoeffer: Pastor, Martyr, Prophet, Spy by Eric Metaxas relates the story of one respectable member of German society, Dietrich Bonhoeffer, a traditional theologian of profound faith and moral courage.  In one particular instance code name “Operation 7” Metaxas details Bonhoeffer’s assignment of spiriting Jews out of Nazi Germany to safety in neutral Switzerland, once “A new decree required all Jews in Germany to wear a yellow star in public.” Having understood the timeless danger Adolf Hitler would pose to the people of Germany and indeed the memory of his beloved country, Dietrich Bonhoeffer joined forces with those who would attempt to end the life of the heartless dictator.

The author, a Yale graduate, best-selling writer, speaker and TV host, truly manages to capture the spirit of Dietrich Bonhoeffer, his constant thirst for knowledge, his love for all that is right and his sense of duty to God and country, which bring him to the fateful decision that would eventually cost him his life.

Metaxas organizes his account into 31 chapters, which follow a logical and tantalizing story line. The more one reads the more they are drawn into the narrative, becoming ever curious about the part Dietrich Bonhoeffer would eventually play in the plot to kill Hitler, yet not being able to skip one page of the fascinating events from the life of this pastor/activist turned double agent.

Two of the book’s many noteworthy chapters each offer a rare glimpse of very different sides of Pastor Dietrich.

Chapter 26, “Bonhoeffer in love” and Chapter 27, “Killing Adolf Hitler” show the contrast between different sides of Dietrich Bonhoeffer’s life. On the one hand we see a man of passionate romance, someone who felt strong and uncontrollable emotion towards his betrothed: “May I simply say what is in my heart? I sense and am overwhelmed by the awareness that a gift without equal has been given me […] this ‘Yes’ is to be decisive for our entire life,” he wrote in one of his letters to his beloved Maria, who had just agreed to marry him.

On the other hand, he is portrayed as always in control of his actions, and, thanks to this self-discipline, always able to play his part as a spy to its very best while also keeping calm and composed during his time in confinement. The author notes Dietrich’s time in Cell 92 at Flossenberg concentration camp, where “He seems genuinely to have entrusted himself to God and therefore had no regrets or real fears.”

The book manages to take the reader on the journey of Bonhoeffer’s life. From the first chapter “Family and Childhood,” through his many travels (Chapter 3, Roman Holiday; Chapter 4, Student in Berlin; Chapter 7, Bonhoeffer in America; Chapter 14, Bonhoeffer in London, etc.) and struggles (ideas which affected his conscience such as the ones illustrated in Chapter 9, The Fuhrer Principle; Chapter 10, The Church and the Jewish Question; Chapter 11, Nazi Theology, etc.) and finally into the last days of his life (Chapter 31, On the Road to Freedom), it is all described in such a way that it makes one feel as if they are right there, with Dietrich.

The emotions and theology behind Bonhoeffer’s reasoning and the choices he makes speak about similar feelings and struggles many of his compatriots shared at that moment in time.

The author talks about how the realization that Adolf Hitler was a dangerous and unstable tyrant as well as a threat to the memory of Germany itself drove some of Dietrich’s compatriots who were not frozen with terror to take charge and try to find ways to stop the dictator’s rule and  influence. Fabian von Schlabrendorff, Major Rudolph-Christoph von Gersdorff, Claus von Stauffenberg and Wilhelm Canaris are only a few names of the many who tried to rid the country of the Fuhrer. Dietrich Bonhoeffer was in the middle of it all, and, just like his friends, ended up facing a dark fate.

It was Dietrich Bonhoeffer’s collaborative friendship with George Bell the Bishop of Chichester, England whose early ecumenical attempts to warn Europe “against the design of the Nazis” that in the end through a BBC radio broadcast brought word to Karl and Paula Bonhoeffer of their son’s fate. In remembrance of his dear friend, Bell held a memorial service at Holy Trinity Church in London shortly after the war ended, where Dietrich’s 39 year old twin sister was in attendance with “her half-Jewish husband, and their two girls.”

Anyone who is interested in knowing history through facts as well as personal accounts shall be quite pleasantly surprised to discover the plethora of information this book has to offer.

And, whether one is looking for an engaging biography, intriguing details about life during that awful and tragic period, the German resistance and its plans, or even Hitler himself, reading Bonhoeffer:  Pastor, Martyr, Prophet, Spy can only be to the reader’s benefit as it is an essential step in getting an in depth and logical picture of these past events, which come alive in Eric Metaxas’ timeless account of Dietrich Bonhoeffer.

Georgiana Constantin is a law school graduate who has studied International, European and Romanian law at the Romanian-American University and is presently a political science doctoral candidate at the University of Bucharest. She is also a contributor to the Selous Foundation for Public Policy Research.