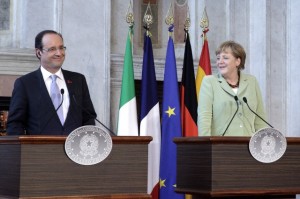 Reforming is a path for reelection: German Chancellor Angela Merkel privatized, deregulated, capitalized. She did not reflate nor accepted deficits : she reduced taxes. For sure, there are some lessons to learn for France. Actually, dismantling the Welfare State has lead to these good results. Since Germany has less civil servants (50 civil servants for 1000 inhabitants in Germany, 90/1000 in France), the German Federal Goverment make a yearly saving of 135 billion euros that France cannot do.

(published by IREF: The Institute for Research in Economic and Fiscal issues; 1st of October 2013)

The views expressed on AustrianCenter.com are not necessarily those of the Austrian Economics Center.
hayek_admin2019-01-14T06:42:55+01:00