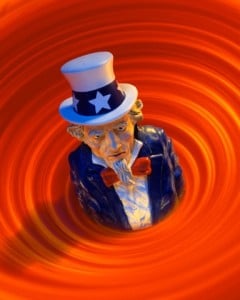 Just as Gertrude Stein said about roses, a shakedown is a shakedown is a shakedown no matter its name. In the Middle Ages, Scottish chieftains from the Lowlands demanded protection money from English settlers along the border. Those payments were known as blackmail and the word, derived from those payments, became part of our lexicon. Extortion involves the verbal or written instillation of fear that something will happen to the victim if he or she does not comply with the extortionist’s demands. Greenmail became common in the 1980s. It was the practice of purchasing enough shares in a firm to threaten a takeover, thereby forcing the target firm to buy those shares back at a premium. The process made a lot of money for a small number of people. It was, of course, shareholders, not management, who had to ante up the money.

Even though such activities are either illegal or, in the case of greenmail, ethically questionable, government has entered the fray. Money and politics, like peanut butter and jelly, have always been inseparable. The only change has been that the money has become much bigger. How many politicians do you know have entered politics with a modest net worth, yet exited a few decades later with substantial assets? The game of extortion, in the political arena, has been played in at least two ways. In Tuesday’s New York Times, Peter Schweizer had an op-ed, “Politicians’ Extortion Racket.” He wrote of using the legislative process to extract money for campaign war chests. He wrote of two tactics, the “tollbooth” and “milker bills.”

For the former, he used the example of Speaker of the House, John Boehner. Mr. Boehner, the author claimed, had delayed scheduled votes, while waiting for checks. “In 2011,” Mr. Schweizer wrote, Speaker Boehner “collected $200,000 in donations from executives and companies in the days before holding votes on just three bills.” The money was collected over a forty-eight hour period.

“Milker bills” are designed to “milk” donations from threatened individuals or businesses. Mr. Schweizer cited the example of President Obama being able to “score big” in 2011 over two antipiracy bills that pitted the President’s supporters in Silicon Valley who opposed the bills, against his allies in Hollywood who supported the measures. When the President indicated that he would “probably” sign the legislation, which pleased Hollywood, the tech industry poured millions into Mr. Obama’s coffers. Despite Hollywood having donated $4.1 million by the start of January 2012, it wasn’t enough. On January 14, 2012, Mr. Obama said he had problems with the bills. Neither was signed. Schweizer quoted a film executive who spoke anonymously to the Financial Times afterwards: “He [Mr. Obama] didn’t just throw us under the bus; he ran us down, reversed the bus and ran over us again.”

The other form of extortion used by government is what the Justice Department is doing to the financial industry. When a federal prosecutor decides to pursue a particular individual or business, he has two significant advantages – the Press, which loves any exposé, and an unlimited source of funds, all supplied by taxpayers. The defendant, presumably presumed innocent, is immediately placed in a defensive role and must use his own money or that of his business to defend him or herself. This is not to argue that all accused are innocent. Wall Street has its share (and more) of weasels and crooks. But the number of indictments that ultimately get overturned is striking. In the meantime, the accused has had his character impugned and is out a lot of money, while the prosecutor has gone on to bigger and more important offices.

The Department of Justice’s (DOJ) shakedown of JP Morgan for an estimated $13 billion is only the latest example. Three quarters of the funds to be collected are supposed to be redistributed to affected investors and homeowners in cities like Detroit. The alleged crime had to do with the bank’s issuance of mortgage-backed securities prior to 2008, allegedly misleading Fannie Mae and Freddie Mac about the quality of mortgages they were issuing. The mortgage securities of interest were issued by Bear Stearns and Washington Mutual before the two firms that went bust. While JP Morgan did not have to bail out the two failing institutions, the bank was strongly urged to do so by the Treasury Department and the Federal Reserve. Mr. Dimon did negotiate, in the case of Bear Stearns, a $30 billion guarantee against poor assets – a guarantee backed by taxpayers. Nevertheless, the appeal to his conscience worked and JP Morgan made the acquisitions. Now, the bank is being penalized for having done the government’s bidding. Of course, that happened under a prior Administration.

Again, my point is not to excuse JP Morgan, or more accurately the people who run the bank. The bank has made some mistakes, but on balance has handled itself well. They obviously took undue risk in allowing Bruno Iksil (the London whale) to make the trades he did. A $6 billion loss is big, no matter the size of a bank. I doubt that Mr. Dimon, had he been the managing partner of a private firm, would have allowed Mr. Iksil to speculate so wantonly with his [Mr. Dimon’s] money or that of his partners, but when the money belongs to shareholders, a different mindset takes over. In any respect, Mr. Dimon has been well-compensated for his efforts. Since becoming CEO of JP Morgan Chase on December 31, 2005, the stock has appreciated 38%, a compounded return of 4.1%, while Mr. Dimon has been paid in excess of $100 million and owns about $300 million of the stock.

It is important to keep in mind that shareholders, as owners, are liable for any payments. The bank has reserved $23 billion for fines and legal fees, about 11% of the market value of the shares. (As an aside, but as an indication of the costs to shareholders – and payoffs to lawyers of government lawsuits – a Bloomberg survey in August found that the six biggest banks had spent $103 billion on legal costs since 2008.) Keep in mind, those reserves set aside by JP Morgan belong to the shareholders. As an owner of 5.8 million shares (roughly 0.15% of the outstanding shares), Mr. Dimon will be part of the payment process. His share of the $13 billion would amount to about $1.9 million, or roughly one month’s salary. That doesn’t appear very punitive.

No matter how we term them, egregious settlements are still outrageous. The DOJ is in talks with a hedge fund manager to pay – in this case from his personal funds – $1.3 billion. That does seem punitive. Last January, they extracted a little over $10 billion from Bank of America. The DOJ is unique in that it is the department of the Executive branch that comes closest to operating at a profit. In 2012, their budget was $28.2 billion – a little less than 2012 annual revenues at DuPont. However, it wasn’t enough to prevent guns from being shipped to Mexican drug dealers, but it did allow them to snoop on reporters. That same year, 2012, the DOJ bragged in a press release that the efforts of their Financial Fraud Enforcement Task Force resulted in a $25 billion settlement between them and 49 states and five banks – Bank of America, JP Morgan Chase, Wells Fargo, Citigroup and Ally Financial (formerly GMAC).  Additionally, for the same year, the DOJ secured $4.9 billion in cases involving fraud against the government.

The DOJ would have us believe it is free money. It isn’t. It is shareholders who are paying the fines, or “hush” money, and taxpayers who are supporting the prosecution. Since more than half of Americans own stock through pension or retirement plans – generally the same half of Americans that pay federal income taxes – the process can be seen as another tax on hapless citizens, or of robbing Peter to pay Paul when Peter and Paul are one and the same.

Our government is addicted to spending but short on tax revenues; thus seeks new sources of income. Thirteen billion dollars from JP Morgan, if that becomes the final number, is just over a day’s spending by the federal government, but does represent about 2% of this year’s expected deficit. While the alleged crimes occurred in the mists of a murky past, the government’s motivation is obvious – punish those who have done wrong, especially if they are of a politically incorrect persuasion (in the eyes of the Administration), while recognizing any cash received will be useful. But, it should be remembered that when they claim to punish institutions, they are really penalizing millions of innocent people, stockholders and taxpayers alike. The methods, similar to those of your average, everyday extortionist, combine intimidation with threats. As those who have been exploited know, the government can make life difficult for a banker or a hedge fund manager, especially if the target has raised the ire of the Administration.

Calvin Coolidge, the 30th President of the United   States, was noted for his thrift. He recognized that public servants were there to serve the public. He recognized that the money government spent belonged to the taxpayer and that they [government] had a fiduciary responsibility to treat those funds with respect. Coolidge was a believer that the property of the country belongs to the people of the country: “They do not support any privileged class…They ought not to be burdened with a great array of public employees.” In his 1925 inaugural, Mr. Coolidge said: “The collection of