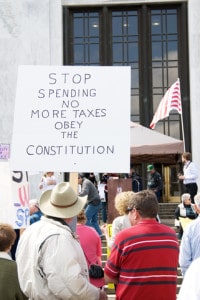 a protest sign against government spending and taxes
Image by © Dreamstime

Vital recent audit work has revealed the misconceived waste in the Mega Events Fund. $97 million of taxpayer money have been spent on projects so poorly selected and supervised that the Tourism Commission imposes financial sanctions on 41% of them. Employment benefits and participation are inflated and tourism objectives are not met. The audit suggests other financial irregularities.

The best the government can do is “welcome the review” as “an opportunity to improve the overall operation, management and effectiveness” of the fund, which has a further $150 million to spend. The private sector would not tolerate a project that was found to be so wasteful. Such project would be swiftly closed down, rather than have its budget increased. Private sector waste and inefficiency is self-correcting. Public sector failures too often invite more spending and resources.

The plan back in 1996 was to take on external customers and make the department more competitive. The auditor found lack of market price comparisons, no plan to gainfully use the $2,308 million retained earnings, no non-government clients, government agencies not conducting competitive tendering for these services, breaches of Civil Service Bureau overtime guidelines for contract staff and an unconscionable 10 year delay in releasing a huge 16,000 sq m site in Causeway Bay for development. The case to privatize these operations is overwhelming.

The auditor released eight reports last month. It is worth stepping back from the wearying repetitive tales of delay, overspending and lack of accountability to ask what are the underlying problems. Many of our rank and file civil servants are diligent and efficient in administering simple rules that are still the envy of those who live in more bureaucratic countries. However, the audit reports show that as government stretches beyond what it can do well, these disciplines break down. This is particularly the case when programs are designed by our new breed of politicians to appeal to a constituency with more public funding.

Firstly, the objectives of new programs are poorly defined and often made up on the run. Exhibit A: The Mega Events Fund. Another scandal waiting to explode is “social enterprise”. Taxpayers have funded at least 226 of them without the auditor being able to find a definition of what constitutes a “social enterprise”.

Secondly, programs giving money away inevitable attract “rent seekers”. Whether it is in creative industries funds, social enterprises or for mega events we see time and again schemes designed to extract money from the government to work for the private benefit of the organizers who often under-deliver on their declared goals.

Thirdly, the civil service is very poor at monitoring how taxpayers’ money is spent once it is channeled into private hands. When money is given away for “social” rather than explicit commercial purposes, there is little established procedure to scrutinize how it is spent and to measure its benefits. Weak monitoring, if at all, is an open invitation for fraud and mismanagement.

Fourthly, the government is not very good at cleaning up after itself. When assets are surplus to requirements, they are almost never returned to the private sector. The public sector does not measure itself on returns on capital employed, so it inevitably wastes capital.

Finally, when programs are designed for their publicity impact and political objectives we get the worst outcomes.

The Director of Audit cannot comment on the objectives of the programs reviewed, only on whether value for money is delivered. It is up to us to hold the government to account for what it chooses to do with our money. Unfortunately the cynical response of too many is to try to grab their share.

The views expressed on AustrianCenter.com are not necessarily those of the Austrian Economics Center.
hayek_admin2019-01-14T06:17:15+01:00