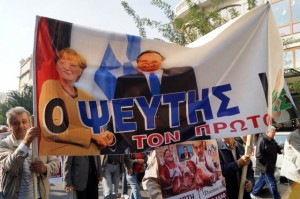 He is an associate professor of law and economics at the University of Athens. He is the founder of The Greek Crisis, a blog, and is on Twitter.

Greece is a part of a continent overwhelmed by crisis while economic power shifts to emerging countries. But only Europe can help Greece recover.

During its tumultuous history modern Greece has always managed to be part of the winning alliances. Right after its independence Greece was attached to the powerful British Empire. In the two world wars Greece was an energetic ally of the western powers. After a ferocious civil war it saved itself from becoming the southern part of the iron curtain and during the Cold War it was a member of NATO and an ally to the U.S. These alliances  (despite their predicaments) helped Greece to realize two dreams: national integration and economic development (from 1929 to 1980 Greece had an average rate of growth of 5.2 percent).

The views expressed on AustrianCenter.com are not necessarily those of the Austrian Economics Center.
hayek_admin2019-01-14T06:40:41+01:00