His Aim Is True, Sometimes 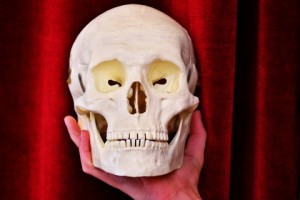 White skull and the hand in the theatre.
Image by © Dreamstime

William Shakespeare. Merchant of Venice. Circa 1598.

Everyone knows about Shylock. Even those who have only a passing familiarity with Shakespeare know about the vicious money-lender in Shakespeare’s The Merchant of Venice. He lends Antonio (the merchant of the title) 3,000 ducats to give to his friend Bassanio, and if Antonio fails to repay the loan in time, he must give Shylock a pound of his flesh.

A lot has been written about Shylock and about his contract with Antonio. (Some of it has even been written by my brother.)

But we spend a lot less time thinking and talking about Bassanio, the friend for whom Antonio takes on the debt. Bassanio interests me because he represents what seems to be a completely different way of financial thinking. In contrast to Antonio’s fairly conservative financial approach—while he has invested heavily, he has diversified his investments into three different ships—and Shylock’s grasping, near-miserly attitude, Bassanio is a spendthrift. When we first meet him he is explaining to Antonio exactly how he has ended up broke again.

‘Tis not unknown to you, Antonio,

How much I have disabled mine estate,

By something showing a more swelling port

Than my faint means would grant continuance:

Nor do I now make moan to be abridged

From such a noble rate; but my chief care

Is to come fairly off from the great debts

Wherein my time something too prodigal

In other words, in the style of spendthrifts the world over, he tells Antonio that he has spent more than he has to look like a more important person than he is. Now he is in debt, and he is worried. But, he adds, he won’t be worried for long, because he has “plots and purposes/How to get clear of all the debts I owe.” Those plots will involve, however, just a little bit more investment from Antonio. After all, Bassanio argues, money management is like archery.

In my school-days, when I had lost one shaft,

I shot his fellow of the self-same flight

To find the other forth, and by adventuring both

This is a perfectly reasonable way to find a lost arrow, according to several archers I consulted—but it’s a fairly rotten financial plan. It amounts to “throwing good money after bad” or doubling down on a bad hand.

And what are the precise details of Bassanio’s plan? It seems that “in Belmont is a lady richly left,” and Bassanio means to wed her and her inheritance. If he can win her.

Despite Bassanio’s appalling credit history, Antonio acts on the notion that “sunk costs are sunk” (this joke is much funnier if you have read the play) and takes out the loan to help him. While this decision rapidly brings things to a peak of tension for Antonio in Venice, events go beautifully for Bassanio. He arrives in Belmont. Portia, the “lady richly left” is delighted to see him. All he must do to win her is to play a little game that her father devised before he died.

In a scene straight from a fairy tale, Bassanio is presented with three small caskets or chests—one of gold, one of silver, and one of lead. The gold casket reads, “Who chooseth me shall gain what many men desire.” The silver casket says, “Who chooseth me shall get as much as he deserves.” And the lead casket is engraved with, “Who chooseth me must give and hazard all he hath.” By the time that Bassanio is ready to choose, those of us watching or reading the play have already seen two suitors choose and fail. So we know several things. First, by the immutable law of fairy tale triplets, we know that Bassanio will choose correctly merely because he is choosing third. Second, we know that the right choice is the lead casket, because the two earlier suitors chose the gold and the silver caskets and were rejected. Lastly, we know that Bassanio’s character means that he is perfectly suited to make the right choice.

How do we know this? Well, the lead casket says, “Who chooseth me must give and hazard all he hath.” Portia’s previous suitors argued against this casket by saying it (and perhaps Portia) was too unappealing for such a risk—“You shall look fairer, ere I give or hazard” and:

Men that hazard all

Do it in hope of fair advantages:

A golden mind stoops not to shows of dross;

I’ll then nor give nor hazard aught for lead.

These previous suitors are following some very sensible real world financial principles. Bassanio, however, is following fairy tale rules. He has already proven in Venice that he is perfectly happy to take all kinds of irrational risks with his fortune and with his friend’s fortune. The possibility of a very high return on a risky investment in something that is apparently worthless is irresistible to Bassanio. Of course he will choose lead. He would choose lead even if he didn’t like Portia. He would choose lead for much smaller stakes than her endless wealth. And in a place like Belmont, where marriages are decided by casket games, he is a clear winner.

So here are the questions that I have always had about Bassanio. His financial irresponsibility, taken out of the realistic world of Venice (which is governed by scarcity and real risk) and transported to the fairy tale world of Belmont (which is governed by luxurious superfluity) is transformed into good sense. Are we meant to see him as the model for good choices in this play? Are we meant to remember that his initial stake in the casket game means that his best friend nearly dies? Are we meant to think that his choices are only good choices in a world with no scarcity? The great thing about a great play is that it can open these questions, and leave them for us to ponder through repeated readings. At the moment, I’m inclined to think that Bassanio may serve as the opposite extreme to Shylock—both of them willing to see Antonio die in order to achieve their own satisfaction and neither of them engaging in anything like a reasonable relationship with wealth.

Thanks to Adam Cowming, Kyle Trowbridge, Joe Lehman, and Sean Malone for their helpful elucidation of archery questions.

The views expressed on AustrianCenter.com are not necessarily those of the Austrian Economics Center.
hayek_admin2014-04-11T11:14:09+02:00