Holy cow: a wave of violence casts a shadow over India’s democracy and economic prospects

The cow, a docile and useful animal in itself, in India has always been something of a political beast. It has emerged in the forefront of the country’s political agenda again, after a series of gruesome acts of violence across the land – all in its name. This alarming trend weakens the international standing of India’s prime minister, who was slow to speak up. It also casts a long shadow on India’s hopes of becoming a more modern, creative society capable of competing in the global economy.

Over the last two years, three noted Indian authors and rationalists who spoke out against religious and cultural superstitions have been assassinated. Many other authors, journalists and artists have been threatened. A few have gone into self-imposed exile.

Also, there have been incidents when radical Hindu groups organised public ‘conversions’ for some Muslims and Christians – on the grounds that these people needed to be brought back to the Hindu fold (ghar wapsi) from which they allegedly had been ‘lured away.’

There have also been campaigns seeking to prevent Muslim boys from marrying Hindu girls; some believe that such intimidation is necessary to stop ‘love jihad’ – a plot to increase the Muslim population in India. Quite a few couples were forcibly separated, while others had to go into hiding; some Muslim men were accused of having abducted their Hindu spouses.

According to official data released periodically by India’s Ministry of Home Affairs, the number of violent religious conflicts increased sharply during the first six months of 2015 (see table). 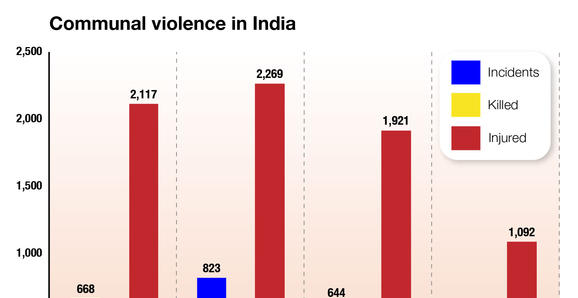 The number of violent religious conflicts in India increased sharply during the first six months of 2015 (source: macpixxel for GIS)

Mahatma Gandhi, the leader of India’s independence movement in the first half of the 20th century, often referred to the cow as a symbol of Indian culture and economy. He famously said he would neither kill a man to save a cow, nor would he kill a cow to save a man.

Then there was Vinayak Damodar Savarkar, a nationalist figure credited by many with the creation in the late 1920s of Hindutva, a political movement that claims to be based on ‘true’ Hindu identity. He vehemently opposed Gandhi and criticised the idea of putting an animal and a human being on an equal footing. Today, though, many Hindu nationalists who extol Mr Savarkar are also in the vanguard of the campaign to protect the cow. They have demonstrated a willingness to kill – or be killed – in the name of the animal.

The widely reported September 28, 2015 case of the lynching of Mohammed Akhlaq, a 52-year-old Muslim who was beaten to death by a village mob after his family was accused of eating beef, finally prompted India’s intellectuals to take a public stand. More than three dozen authors from different parts of the country have returned their awards to a state-supported literary body, the Sahitya Akademi, in protest at the government’s passivity in the face of such violence.

New Delhi’s reaction betrayed nervousness. India’s finance minister, for example, characterised the writers’ gesture as a ‘manufactured dissent.’ Some have sought to downplay the Akhlaq lynching as an inevitable reaction to acts offending Hindu sensibilities, an unfortunate, sporadic incident or even an ‘accident.’

Meanwhile, graffiti has begun to appear in many cities and villages, particularly in the northern Indian states, calling for death to all those who kill cows. To some in India, these merely reflect political sentiment. The chilling fact is, however, no one dares to counter such graffiti with opposing statements.

It is true that India is a multicultural, diverse society which holds a wide array of perceptions on matters eternal and temporal. But it has also become clear that a nationalistic push to mobilise people on the basis of Hindu identity is under way. The process also feeds on the age-old debate about the idea of what is India.

Typically, when the going gets tough, politicians often resort to ‘identity politics’ based on creed, caste, ethnicity or race as a way to rally their support base and target designated enemies. Leaders in India are no different. They have long relied on identity ideologies to divert popular attention from the country’s seemingly insurmountable social and economic problems.

Over the past two decades, however, the returns from such crass policies have diminished. The electoral dividend from fragmenting the polity has been declining over time, which has finally prompted politicians to seek ways to broaden their support bases. Faced with the risk of becoming politically irrelevant, Indian leaders, too, have adopted more conciliatory rhetoric and learned to look for allies outside of their core constituencies.

Narendra Modi, India’s current prime minister, earlier in his career was considered by many in the Hindu nationalist camp as their brightest rising star. He has learned his lesson, however, from the aftermath of the bloody Hindu-Muslim riots in Gujarat, India’s westernmost state, where he was the head of the local government from 2001 until 2014. According to many analysts, it was the 2002 riots that caused the unexpected defeat of India’s ruling coalition in the general election in 2004. That coalition’s leading force, the Bharatiya Janata Party (BJP) spent the following decade as the principal opposition party. Perhaps in response to that setback, Gujarat’s Chief Minister Modi silenced many of the hard-line Hindu nationalists in the state and championed economic development instead. The change of tack eventually worked for him.

In the general election campaign of 2014, Mr Modi’s development agenda, which promised higher growth, investment and jobs in a corruption free, effective governance framework, rewarded the BJP with an unprecedented national victory and put him in charge of India’s central government.

Of the lessons that Mr Modi and other Indian politicians could draw from these developments, two stood out as particularly important. One was that even though some 80 per cent of India’s citizens are Hindu by religion, there is no such a thing as a national Hindu identity that can be used to create a winning electoral block. The other highlighted the fact that elections tend to be decided by marginal voters who easily switch their allegiance from one side to another.

Seen against this background, Mr Modi’s protracted silence in the face of the current wave of religious violence in the country is perplexing. As the prime minister was slow to respond, some of the fringe Hindu nationalist groups were already claiming the credit for BJP’s 2014 election victory; the success of which was allegedly due to their mobilisation of the ‘Hindu vote’.

These groups are also seeking to leverage the cow as a symbol of Hindu identity. The charge of beef eating levied against the Muslims is used only to rally Hindu sentiment against a common ‘enemy.’

In reality, a survey a few years ago found that as much as 69 per cent of Indians, including 45 per cent of the Brahmins (the caste of leaders, teachers and protectors of sacred learning), are not vegetarians. Another survey found that about 7.5 per cent of Indians eat beef. India happens to be one of the biggest exporters of beef – buffalo meat. The slaughter of cows, meanwhile, is either prohibited or restricted in an overwhelming majority of Indian states. These hard facts hint at the possible political designs hidden beneath the current debate over the cow.

A year and a half after Mr Modi led the BJP to power on the national level, there is a palpable sense that an attempt is being made to create a new narrative for India, one based on a few people’s notion of the Hindu identity. What makes the effort ironic is that these self-proclaimed champions of Hindu identity tend to mirror some of the institutions and sentiments of the Christians and Muslims they denounce.

The Hindu zealots are extremely critic