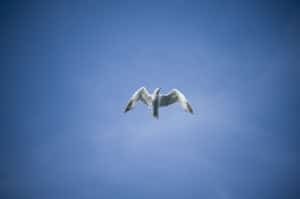 Freedom is not for the faint of heart. The desire to be free is universal. It is not limited to the sons and daughters of the Enlightenment. Cemeteries around the world are filled with those who have died for freedom. Islamic terrorists have brutally decapitated American and British journalists and aid workers, and then posted them on YouTube in an attempt to thwart the spread of democracy in the Middle East. But one of the most repressive regimes in the history of mankind – China – too often gets a pass from those who admire her current mercantilist prowess.

The protests in Hong Kong, which after ten days appear to be dissipating, have elicited support from all over the world – except in mainland China where leadership fears an informed citizen, and in Washington and London where leaders have effectively sided with Beijing, “in,” as Martin Lee, founding chairman of the Democratic Party in Hong Kong, explained in Saturday’s New York Times, “a disgraceful display of power politics.”

While it is impossible to accept Freedom House’s country-by-country report without a grain of salt – for example, Jamaica and Namibia place ahead of the United States – directionally they are right. On the list of 179 countries on the 2013 World Press Freedom Map, China ranks 173, which worries those in Hong Kong who had been promised, under the 1984 Sino-British Joint Declaration, the right to elect their own leaders. (That paper was signed 13 years before the British ceded rule over Hong Kong to the Chinese in 1997. Nevertheless, the term of the Declaration was for fifty years.)

Instead, Beijing has ruled that candidates for Hong Kong‘s top executive post must be vetted by a nominating committee filled with Chinese government allies. It is for the right to hold free elections and for the resignation of Leung Chun-ying that those in Hong Kong have been demonstrating. Mr. Leung was elected chief executive on a pro-Beijing ticket two years ago.

That this protest comes on the anniversary of the demonstration and then massacre at Tiananmen Square has not gone unnoticed. Estimates are that more than a million gathered in 1989 in Beijing’s central square. The Square is named for the north, or Tiananmen gate, which means the Gate of Heavenly Peace. In early June 1989, it was anything but peaceful. Thirty divisions, or roughly 200,000 Chinese troops and artillery, entered the Square to dispel the protestors. How many were killed is a state secret, but estimates put the number in the thousands.

Estimates are that there are over a million protestors in Hong Kong, which is remarkable for a city of just over seven million people. President Xi Jinping is in a tough spot. In the Wall Street Journalhe was described by Orville Schell, director of the Center on U.S.-China Relations at the Asia Society, as a “strong and unyielding leader.” Mr. Xi now oversees the world’s second largest economy. It is not clear that he can use force the way Premier Li Ping did in 1989. First, Hong Kong is a relatively open city, with thousands of workers who come from countries across the globe. It is far more cosmopolitan than the capital 1200 miles to the north. Second, social media is ubiquitous today, unlike the “dark ages” of 1989, meaning that whatever Mr. Xi does will be viewed by people around the world in real time. And, third, Hong Kong has a reputation as a relatively free city. It is the gateway to the mainland. It was Hong Kong that propelled China’s economic growth over the past two decades. It was Hong Kong that has made China part of the pool of “established” nations.

An anonymous senior Obama Administration official was quoted in Friday’s New York Times. He stated: “We have principles and values that we want to promote, but we’re not looking to inject the United States into the middle of this.” Agreeing, China’s foreign minister Wang Yi said: “Hong Kong’s affairs are China’s internal affairs.”

That is the accepted wisdom in international relationships. But should that always be the case? When does repression deserve a strong international reaction? Kristallnacht occurred more than three years before the United States entered the war against Germany. Did we do the humane thing in deferring intervention, leaving millions of Jews to be murdered by Nazis? Between the years 1975 and 1979, the Communist Khmer Rouge killed 21% of the population of Cambodia. Were we right to ignore the plight of those hapless people? I don’t pretend to have the answers, but it is not right to ignore mass killings, whether it is the genocide of Islamic extremists exterminating Turkmens, Yazidis, Shabaks, and Christians, or whether it is the Chinese killing hundreds of thousands of Tibetans. At some point it is our business. As John Donne wrote 400 years ago, “Any man’s death diminishes me, because I am involved in mankind.” What nations do within their borders can have implications beyond them.

Freedom is the best antidote to inequality. Despotism is its friend. Only six percent of China’s citizens are members of their Communist Party, yet they control the political system and the vast portion of its concentrated wealth. China is home to 152 billionaires, second only to the United States. (Its authoritarian neighbor, Russia, is third.) Yet, over 900 million people live on less than $5 per day.

So, why wouldn’t the people of Hong Kong be protesting? While today they are freer than their brethren on the mainland, they sense the long arm of Beijing. They want to regain the independence they once had. The average income in Hong Kong is ten times that of China. Being wealthy, they don’t want to become poor. Residents of Hong Kong understand that mercantilism, as practiced by the Chinese, does not lead to social justice, the rule of law or income equality. It is a form of elitism hidden behind the facade of socialism. As Seth Lipsky recently noted, Hong Kong has already had its taste of freedom. And that is what worries those in Beijing. Mr. Lipsky added, “If freedom comes to China, it is going to enter through Hong Kong.”

Leung Chun-ying gave an ultimatum to the protestors Sunday evening – leave by Monday morning or the police would “take all actions necessary” to clear blockades to government offices. Demonstrators have stayed on, but their numbers dwindled and access was allowed to government offices this morning. It remains to be seen whether their message was heard in Beijing. But freedom is fundamental. It requires courage and should always be defended.

The views expressed on AustrianCenter.com are not necessarily those of the Austrian Economics Center.
hayek_admin2019-01-14T06:12:50+01:00