How Far an Economy Can Fall 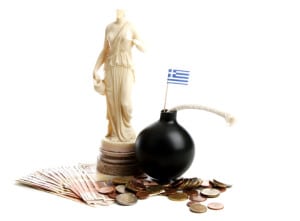 ATHENS — How far can a modern economy sink?

The Greek economy is entering its fifth year of decline. Nominal gross domestic product is about 28 percent lower than it was four years ago. The official unemployment rate is 27.5 percent (as though the decimal point matters, given the poor quality of the data). The unemployment rate for young people is about 60 percent. Nonperforming loans continue to rise. The privatization program continues to fail, in part because of an absence of bidders.

In a paper posted earlier this month, leading Greek economist Yanis Varoufakis of the University of Athens and the University of Texas at Austin argues Greece is “a failed social economy.” The following are several of his examples:

Contractors who work for the public sector are paid up to 24 months after they provided the service and prepaid sales tax to the Tax Office.

Half of the businesses still in operation throughout the country are seriously in arrears vis-a-vis their compulsory contributions to their employees’ pension and social security fund.

Eventually, the decline will stop. Some argue that Greece is near bottom, while others say no, but no one knows for sure.

Even with gross mismanagement and policy incompetence, no country’s GDP goes to zero, because some food and other essentials are produced no matter what. During the Great Depression, GDP dropped by about a third between 1929 and 1933, which was the worst decline in U.S. history. The other EU members, and particularly the Germans, are providing a partial bailout to the Greeks, to both limit and stretch out their debt payments and provide a very limited social safety net.

Yet knowledgeable observers also realize that despite the previous debt restructuring, the failure to meet targets means another bailout is almost certain for this year. Too many Greeks, including many politicians, blame the EU for their problems, rather than confront the reality that it has been their own government that has been overspending for decades — and no other country or the EU forced it to do this.

Eventually, the fall in real wages adjusted for the level of productivity will make Greece competitive again, and foreign investment will renew along with job growth. Greece will continue to have a comparative advantage in tourism; after all, the country is spectacularly beautiful, with an ideal climate.

Not even corrupt and incompetent politicians have been able to destroy what God gave the Greeks. Still, tourism and certain other comparative advantages will not produce a vibrant economy, but they will establish a floor.

The greatest danger to an eventual economic turnaround in democracies is political. Unemployed and underemployed people are frustrated and unhappy, and they take it out on the politicians who they blame for getting them into the mess.

Most politicians have short time horizons; namely, no further than the next election. Thus, the political incentive is to provide more government handouts in one form or another, and more “make-work” jobs.

Both of these activities stifle — rather than enhance — growth. Whether they are financed by taxation, debt or just printing money, they suck resources out of the remaining productive people and businesses. Despite thousands of years of failure of welfare and socialist states, the siren call of immediate gratification often trumps rationality.

The current unpleasantness with Russia and Ukraine could further harm Greece, which depends on Russia for more than 75 percent of its natural gas, and most of it passes through Ukraine.

Greece also needs a vibrant EU economy to help pull it out of the current mess. If European growth is hurt by the effect of its own sanctions on Russia, Russia’s sanctions on Europe, or a disruption in Russian oil or gas flow, the effect could be catastrophic for Greece, given the fragility of its situation. The Greek economy is too small to significantly damage the European or world economy, but the opposite is not true.

The views expressed on AustrianCenter.com are not necessarily those of the Austrian Economics Center.
hayek_admin2014-04-02T11:17:29+02:00