How market-friendly is the eco-social market economy? 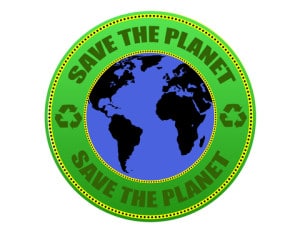 The eco-social market economy tries to achieve social justice and the protection and preservation of natural resources, while formally sticking to free market economics. The underlying notion however is that a pure free market economy, completely left to itself, will not produce ‘optimal’ results regarding environmental and social outcomes. For this purpose the state is called to tax wealthy people, redistribute the returns to and regulate economic activity in such a way so that it becomes ‘sustainable’ and serves the ‘public good’. As Josef Riegler, former Austrian vice-chancellor and founder of this movement, put it: “The eco-social market economy aims at: higher chances for the brave, more solidarity and more responsibility for natural habitats.”

While this all sounds nice and good on the first look, certain problems might arise if politicians follow this kind of model. In the following I will identify three major problems with the eco-social market economy and highlight in what way this movement could turn out to be a major foe of individual liberty.

Firstly it important to state that the movement for the Eco-social Economy is not a very homogeneous movement and partially includes demands that are very much detached from the original idea. Al Gore for instance, who is a firm supporter of the idea of an Eco-social market economy, came up with an idea for a “Global Marshall Plan”. This project is designed to assimilate financial circumstances worldwide and by doing so lay the foundations for a sustainable “future-civilization”. The plan includes erroneous demands like the implementation of the same ecological and social standards on a global scale or the active advancement of ‘green’ technologies using tax money. The funding for the implementation of the ‘Global Marshall Plan’ would be taken care of by a levy on financial transaction and a global cerosine tax. So it is not surprising to see organisation like ATTAC or the Club of Rome support this project. Supporters of the eco-social market economy are generally in favor of increased taxes on fossil-fuel energy sources and other environmental taxes on the national level and call for stronger cooperation of organisations like the UN, the ILO and IMF. This is projected to eventually lead to world-governance and certainly can not be good news for the citizens and tax-payers of this planet.

Secondly, there is no need to assume that social and environmental conditions will be terrible if market processes are not regulated. Countries like New Zealand, Switzerland and Australia, which all make the Top 5 of the Index of Economic Freedom and therefore only exhibit relatively small amounts of government interference into the economy, are not known for outrageous inequality or horrific environmental conditions. On the contrary, these countries actually seem to do much better than those that display high amounts of government interference. It can be argued that it is not market- processes that lead to environmental decay and social inequality, but rather the unjustified interfering into economic activity that grants special favors (like the privilege to pollute) to certain companies or individuals. A vast body of literature today supports the idea that free markets and social justice or environmental stability are by no means antipodes. Berggren (2003) for instance finds that economic freedom is not only positively correlated with economic growth, but can also lead to higher income equality in societies. He states “that the more economic freedom increased in a country between 1975 and 1985, the higher that country’s degree of income equality was around 1985.” But the correlation between economic freedom and environmental protection is even more impressive. Roberts and Olson established a correlation of 0.6, in the social sciences a sign of an extremely high relation, between the respect for property rights and environmental protection. This relationship can be reviewed in the graph below, which clearly indicates “that countries with good private property protections have cleaner environments.” (Roberts and Olson) 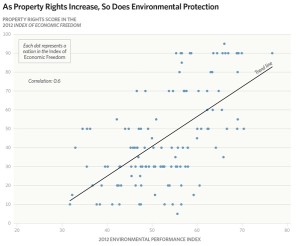 After having considered the literature on the subject and having gotten familiar with the overwhelmingly positive effects that free-market- policies have on environmental and social outcomes, one can conclude that the basic notion of the idea of the Eco-social market economy, namely that we can build fairer and more sustainable societies by wise government interventions, is very likely to be flawed.

Thirdly, defining that certain ecological flaws or social matters are objectionable leaves the door to further and more severe government intervention open very widely. The great Austrian economist Friedrich Hayek called this phenomenon “The Slippery Slope” and he described this problem in great detail in his classic The Road to Serfdom. If policy makers decide on the necessity to intervene in order to attain a certain end this usually leads to further interventions. Once the general principle, that the government can and should be able to encroach the lives of people in order to improve certain conditions, is accepted, there is no logical final point to this process. Government intervention, which in turn evoces further government intervention, can quickly constitute a vicious circle and lead to disastrous outcomes in the long run. Hayek understood this sharply and therefore postutalted that “If we wish to preserve a free society, it is essential that we recognize that the desirability of a particular object is not sufficient justification for the use of coercion.” If government intervention is allowed to start and take hold more and more lots of dangers loom for the independce and the life chances of people. This is of course also true in the particular case of the eco-social market economy. Once initiatives like the “Global Marshall Plan” are established in the first place, nobody can predict how these projects will turn out in the future. The projected plan, which might envisage noble goals like the creation of a fairer society or the reduction of carbon-dioxide emission, has, once decided on, to be realized at all costs. This of course creates immense dangers for the adherence of individual freedom, since any significant dissent could not be tolerated without threatening the attainment of the plan. The fullfilment of the plan then becomes the prime goal of political action, which must be achieved at all costs and can not tolerate deviating points of view.  Therefore state intervention in economic affairs is in principle incompatible with freedom of expression or opinion and the freedom of the press and can lead to driftage towards totalitarian and repressive regimes in the long run. In such cases, Hayek warned us, “the individual would more than ever become a mere means, to be used by the authority in the service of such abstractions as the ‘social welfare’ or the ‘good of the community.'” This gloomy vision, which might seem a little exaggerated at first sight, is certainly a very real danger that has to be considered when talking about movements like the eco-social market economy.

So, concluding I would say that while the idea of an “eco-social market economy” sounds nice on the surface and it is general appreciation of more or less free markets is certainly welcome, the concept can not really be accepted as a good model for the development of our economies and its appreciation is likely to do more harm than good. The market economy, and I mean the market economy without prefixed adjectives, is not only the best way to maximise the overall wealth of societies, but also the optimal tool to make those societies fair, equal and sustainable.

Berggren, Niclas; The benefits of economic freeedom – a survey; 2003

The views expressed on AustrianCenter.com are not necessarily those of the Austrian Economics Center.
hayek_admin2014-04-02T10:56:42+02:00