How to Get Rich in America 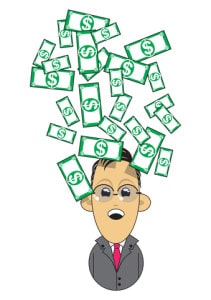 Historically, there were two ways to get rich: hard work and inheritance, apart from hitting the jackpot or robbing a bank of course. Now, in a world of ethically challenged public servants, there is another way – public service.

Inheritance, for the few, is still a powerful means. Four of the ten richest members of Congress have inherited wealth. In 2012, Keith Alexander, director of the NSA, called cybercrime the greatest transfer of wealth in history. That may be true, but in 2000 the Planned Giving Design Center (PGDC) estimated that between 1998 and 2052 $41 trillion will pass from one generation to the next – the greatest foreseeable transfer of wealth in the history of the world. Nevertheless, those funds will only go to a lucky few.

Most wealth in the U.S. has been self-made. Aspiration, inspiration and perspiration, with a dose of luck, have allowed millions of Americans to become wealthy, and a small number to become very rich. Rags to riches stories, like Horatio Alger and the Rollo Books, were once commonly read by young people, providing inspiration to succeed. For millions of immigrants, America represented the fulfillment of a dream. Unlike “the old country,” it made little difference where one was born, or what was one’s name; a desire to better one’s self through hard work was what mattered. Independence and self-reliance were valued qualities.

While money and politics have long been soul-mates, the relationship has only strengthened in recent years. Ironically, while we have become a nation that encourages dependency by providing more and more services, we have also become intrigued with wealth and with the things money can buy. We are fascinated by homes that cost over $100 million; the Wall Street Journal has a section on Thursday’s called, “Mansions.” The Financial Times has a weekly glossy magazine entitled, “How to Spend It.” A Norman Rockwell painting that graced a $0.15 copy of a 1951 edition of the “Saturday Evening Post” sold for $46 million late last year. Idiosyncrasies of the rich are regularly featured in glossy magazines, on TV and on the internet, allowing vicarious feelings of jealousy to gestate. We admire Pope Francis, but would prefer to live like New York’s Cardinal Timothy Dolan. It is unsurprising that in such a milieu, a $174,000 a year Congressman or a $400,000 a year President would feel he or she had been left behind.

A focus on materialism permeates a bloated government bureaucracy. In the past, there were workers who would willingly give up some income for security. Government jobs fit that request. Those jobs were less responsive to economic challenges and less subject to the whims of private sector owners or managers. In that prior time, reduced risk of job loss equated to less pay.

That has changed. In the latest Forbes’ list of the ten richest counties in the U.S., six are in the Washington metropolitan area, including the two wealthiest – Falls Church and Loudon County. Besides being home to higher paid public-sector workers, the Washington area also attracts lobbyists as bees to flowers. This ability and willingness of individuals to jump back and forth between the private and the public sectors is a leading cause of cronyism, which has led to complexities in the tax code and regulation – satisfying the demands of special interests, but making everything more expensive and more complicated for the rest of us.

The average income of a federal employee at $81,704 exceeds that of his counterpart in the private sector by 60%. Benefits for federal employees’ amount to 39% of income, versus 30% for the average worker; the implication is that government workers make about twice that of their private sector counterparts. That should raise alarm bells among those seeking equality. There has developed a symbiotic relationship between unions representing federal employees and elected politicians. Collectively, unions are the single largest source of campaign funding (almost all of which goes to Democrats); so elected representatives do little to rein-in runaway salaries and benefits negotiated by public sector union leaders.

But the best new way to become rich, without luck or too much effort, is to be elected or appointed to high office. What prompted these musings was an article that appeared in the business section of last Wednesday’s New York Times, that spoke to the fact that Ben Bernanke can make in a few hours speaking “to bankers, hedge fund billionaires and leaders of industry” what he made in a year as Chairman of the Federal Reserve, and that “he is following a well-trodden path…” His fees for speaking range from $200,000 in the U.S. to $400,000 in Asia, according to the Times.

The question that immediately comes to mind is why would anyone pay that much money to hear Mr. Bernanke say something he has said before in a public forum? Or will Mr. Bernanke now speak more candidly, making statements he could not have done publically? Perhaps the sponsor feels it is money well spent for the entertainment and publicity value? Maybe the fee is a form of payback from those who benefitted from Mr. Bernanke’s time in office? I hope not. I don’t pretend to know; the fees just seem excessive.

Ex-members of Congress have long morphed into lobbyists, exchanging governance for salesmanship – making introductions and peddling influence instead of formulating policy. We cannot begrudge their desire to fatten their wallets and to own the private planes on which they rode as guests in their previous lives. Nevertheless, cronyism by definition benefits the few at the expense of the many. The proliferation of cronyism is one of the biggest challenges we face and the single biggest argument for Congressional term limits.

Many politicians take advantage of the opportunities private enterprise offers, even as they knock capitalism in speeches promoting equality. The most hypocritical examples in recent times have been the Clintons and Al Gore. Al Gore, who sits on a few corporate board seats, made a fortune by generating frightening scenarios regarding global warming and the evil of fossil fuels. Has he cut back his personal carbon footprint? Not by a long shot. For $500 million he sold his money-losing TV news business, Current TV, to Al Jazeera, an oil-funded Mid East media company. In the thirteen years since President Clinton left the Presidency it has been estimated that he earned over $100 million. Other Presidents, like the Bushes, and Carter and Ford made money writing books, dispensing advice and making speeches, but none on the scale of Bill Clinton – just as none have so craved the limelight.

Government is filled with bureaucrats who no longer see public service as public service, but as a means of getting a higher-paid job. They seem to have little understanding that the money they take home is money paid in taxes by working Americans. They have even less understanding that benefits they have been promised, and for which they feel entitled, will become obligations of the children and grandchildren of today’s taxpayers. Unlike a worker in the private sector whose job hinges on the purchase of a good or service that a client must purchase, “revenues” for government is the mandatory payments of taxes by fellow citizens.

Cronyism and crooked politicians have always existed. Any operation the size of government that has the ability to hand out millions of dollars will assuredly attract the dregs of society. But the concept of using one’s years of public service as a stepping stone for personal wealth is relatively new. When offered corporate board positions once he had left the office of President, Harry Truman stated: “You don’t want me. You want the office of the President, and that doesn’t belong to me. It belongs to the American people and it’s not for sale.” Mr. Truman’s remarks reflect a respect for high office that too often seems missing from today’s narcissisti
c occupants.

It makes little difference whether one becomes a mid-level bureaucrat at State, a programmer at HHS, a postal worker, or a government contract employee one’s income and benefits will greatly exceed comparable jobs in the private sector. If one is elected or appointed to high office, no matter one’s time in grade or the job one does, one’s financial future is secure in the knowledge of the ability sell influence and introductions. And it can be done without the misgivings that characterized more moral men like Harry Truman or Calvin Coolidge who viewed high office as a sacred trust, not as a stepping stone toward financial independence.

Such jobs are dependent on a steady flow of tax dollars. The ability to tax is integral to government, yet there appears little understanding on the part of most government employees (including those elected) as to the inverse relationship between tax rates and economic growth. Should we continue along the path we are traveling, government will overwhelm the private sector; change will be forced and living conditions will decline.

We live in “me” world, one in which materialism takes on a role greater than concepts such as morality, civility and respect. It is a world in which public service, for the sake of doing good, is rarely undertaken. Public service today connotes a ticket to wealth. How to get rich in America? I would still recommend aspiration, inspiration and perspiration, but increasing numbers see richer futures in working have for government or going into politics.