“Humor – A Remedy for Tension, a Tonic for Victory” 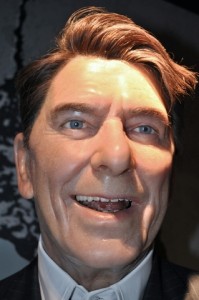 We live in a world addicted to twenty second sound bites. Nastiness consumes politics. Putting on a white tie for the annual Gridiron Club dinner, and then reading pre-set jokes that mock one’s self and others, cannot compensate for the arrogant disdain and avoidance of clear answers that is displayed at press conferences hosted by the President, the Speaker of the House, the President of the Senate, or, for that matter, virtually any other politician. Nor can it atone for the venality that too often passes for debates. It cannot be redeemed by “Slow-Jamming” with Jimmy Fallon or reading lines on Zach Galifianakis’s on-line comedy show.

With handlers pre-approving every statement a politician or candidate makes, the age of off-the-cuff, self-effacing remarks is rapidly becoming a relic of the past. With YouTube and the internet making available every gaffe a public figure makes, spontaneity has become a hazard. Well-meaning comments can be taken out of context. When we think of public figures, we almost always associate them with some statement, usually not flattering, that they made during mental lapses. (Joe Biden, of course, doesn’t require mental lapses!)

Humor, when used by someone with a natural gift, can disarm an opponent and defuse a tense situation. When we think of American Presidents and humor, the two that come most readily to mind are Abraham Lincoln and Ronald Reagan. However, there are others. James Garfield, who only served as President for 200 days in 1881 before being shot by an assassin, once said (appealing to my taste buds): “Man cannot live by bread alone. He must have peanut butter.” Franklin Roosevelt, in the midst of the Depression, curiously advised: “When you get to the end of your rope, tie a knot and hang on.” Harry Truman, when asked about his choice of careers, answered in his earthy manner: “My choice in life was either to be a piano player in a whorehouse or a politician. And, to tell the truth there’s hardly any difference.”

Political humor that is most effective flows naturally. It is not designed to elicit guffaws, but to make a point with the butt of the joke often being the teller. During the 1960 campaign, candidate Jack Kennedy, amid complaints about his wealth, once told reporters: “I just received the following wire from my generous Daddy, ‘Dear Jack. Don’t buy a single vote more than is necessary. I’ll be damned if I am going to pay for a landslide.’” Kennedy had an ability to be warm, self-effacing and authentic. On another occasion, amid calls of nepotism regarding the appointment of his younger brother to be Attorney General, he replied: “I see nothing wrong with giving Robert some legal experience as Attorney General before he goes out to practice law.”

Coolidge, with his famous dour expression – “looking like he had been weaned on a pickle,” as Alice Roosevelt Longworth allegedly once described him – is not remembered for his humor. While he could be funny, he was noted for being spare with both language and time. Once asked about dealing with unwanted guests, he explained he would let the visitors do all the talking. No matter what they said, in about three minutes they would hesitate, at which point he would say, “Thank you,” and the meeting would end. A story, told in Amity Shlaes illuminating biography of Coolidge, shows another side of the man. It tells of Mr. and Mrs. Coolidge taking separate tours of a government farm. Mrs. Coolidge expressed interest in a prize rooster. The farmer told the President’s wife (assuredly in response to a question) that the rooster was able to perform the sex act several times a day. “Tell that to Mr. Coolidge when he comes by,” said Mrs. Coolidge. When Coolidge approached the farmer and the rooster, he asked, “Is it with the same hen every time?” No, said the farmer. It is with a different hen each time. “Be sure to tell that to Mrs. Coolidge,” said the President.

Lincoln is generally considered the first American President with a sense of humor; though I am sure historians and Presidential scholars have other candidates. Robert Mankoff, writing in the New Yorker in November 2012 claimed that what we consider humor today in the 1840s and 1850s was called “the sense of the ridiculous.” Being funny and being cruel “went hand in hand.” But there is nothing cruel about humor when it is most effective. When accused by Stephen Douglas, in one of their famous debates, of being two-faced, Lincoln responded: “Honestly, if I were two-faced, would I be showing you this one?” When some officers were complaining about the drinking habits of General Grant, Lincoln noted: “Well, I wish some of you would tell me the brand of whiskey Grant drinks. I would like to send a barrel of it to my other generals.”

Lincoln used stories as parables to make points and deflect contentious questions. Walt Whitman thought it was “a weapon which he employ’d with great skill.” Richard Henry Dana, United States attorney for Massachusetts, complained that the President resorted to parables when principles were needed. “Storytelling was at the core of the president’s character,” explained Louis Masur, director of American studies at Trinity College, in the New York Times two years ago. Melancholy, according to Mark Twain, is the basis for humor. Certainly that was true in Lincoln’s case, as he suffered from depression made worse with the burden of the Civil War, and with the death of his young son Willie in February 1862.

In our generation, it has been Ronald Reagan who was the master of humor to disarm opponents. Being accused of not working hard, Reagan retorted: “I have left orders to be awakened at any time in case of a national emergency – even if I’m in a Cabinet meeting.” In response to a comment by Walter Mondale in a 1984 debate, Reagan replied, “There you go again!” Mondale’s point was forgotten in the laughter that ensued. In the same year, Reagan countered the claim that at 73 he was too old. He did so before Mr. Mondale could strike. “I am not going to make age an issue of this campaign,” he quipped. “I am not going to exploit, for political purposes, my opponent’s youth and inexperience.” Mondale, like everyone else, laughed. The issue of age was diffused.

Because we live in a time of instant replay and endless re-runs of all indiscretions, politicians have become reluctant to speak extemporaneously. We have all noted how uneasy Mr. Obama is when separated from his Teleprompter. The consequences are wooden speeches. We learn little about the responsiveness or the mental agility of candidates. When a politician goes on shows with Stephen Colbert, Conan O’Brien or Jimmy Kimmel their jokes are scripted and then read. The purpose is to humanize the robot-like figure we are supposed to endorse. It doesn’t work.

But reading jokes is not the same as having the easy self-confidence that allows some to laugh at themselves, to tell humorous stories to illustrate a story. Too many people today see humor in the discomfort of others – in racist or ethnic jokes – or in the use of language or actions designed to shock, not inform. Crony capitalism has become rampant. All politicians, but especially Democrats, have become dependent on organizations from public sector unions, to intransigent and intolerant environmentalists, to Washington bureaucrats, to big banks “too big to fail,” to PACs like George Soros’ Moveon.org. Republicans are as well, but they are a more fractured lot. That the Left works in unity for these people can be seen in the results of Mr. Obama’s policies. Public sector unions were the prime beneficiaries of the Stimulus Bill; The EPA has denied people the benefits of cheaper, more abundant, clean fossil fuels; it has diverted needed water from California’s Central Valley; the FAA is impeding the development of Drones for private use; big banks have become larger and richer than before the crisis. And people have suffered. Average wages are lower than five years ago; food and energy prices are higher; regulation hs stunted economic growth; fewer people are working and more people are on food stamps.

The proliferation of lobbyists and crony capitalism is reminiscent of the old Democrat political machines of 100 and more years ago – men like “Boss” Tweed of Tammany Hall in New York, Tom Pendergast in Missouri, Cook County in Chicago, the “Cracker Party” in Georgia and a host of other cities from Boston to Cleveland to Philadelphia – before Teddy Roosevelt arrived, bringing with him a new dawn of progressivism, which, as we know, brought its own problems.

Sweeping corruption aside will not be easy. Insensitive and supercilious declamations will not do the job. Republicans need a candidate who is intelligent and principled, but also easy going and disarming – a man or a woman who exudes confidence, yet has the ability to explain why the politics of the Right (smaller government, less dependency, an emphasis on moral values and the rule of law) are right for these times. Self-deprecating humor, personably expressed, is the best antidote. The individual must appeal to the citizens who see the Country as a land of opportunity where individuals respond to incentives and individual efforts are rewarded – people who understand that self-sufficiency trumps dependency. And the candidate must do so in a straight forward manner, with humor and without condescension. A good candidate should never impugn unpatriotic sentiments on the part of his or her opponent, but simply make clear, gently and pleasantly, that his or her jud