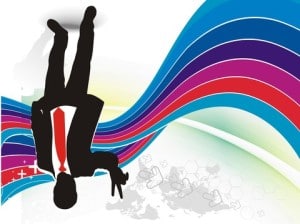 In the last commentary our thesis was that the economic landscape does not suffer from secular stagnation but rather from a complex and confused disequilibrium that diminishes expectations. Rather than focusing on the causes of this disequilibrium policymakers shift tactics among symptoms, always centering them on money and interest rates (such as forward guidance). The purpose of this commentary is to argue that while the recent economic developments (at least for the US) are positive, we seem to be celebrating a victory without counting the costs. Hence, while ready to take advantage of an upward trend in the equities market (as we have previously explained), while underweighting bonds (which may go sideways), we would consider the possibility that another commodities cycle may start in 2015. The latter could possibly serve a dual purpose, namely: profiting from the overall market upswing, and hedging a portfolio with real hard assets.

But first let’s review a graph that for some may epitomize the positive economic developments. While most commentators may be focusing on the unemployment rate (which we consider a misguided indicator given the fact that it underestimates true unemployment), we choose to focus on the long-term unemployed as a fraction of the total persons who are unemployed. 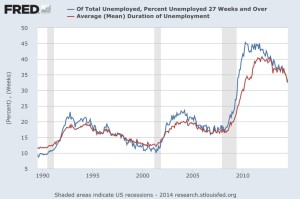 As the graph above shows, while that percentage has declined relative to its record-level in 2010, it is still unacceptably high. It is our opinion that this is the percentage the Fed Chairperson Janet Yellen was looking at when she proclaimed in Jacskon Hole on Friday that there is “significant slack” in the labor market, rather than what was portrayed in the media. As it becomes obvious from the statement, the Fed is not ready to proclaim an end to its expansionary monetary policy, and we anticipate that it will be putting more weight into wage inflation measures, long-term unemployment, and part-time employment, before making its final call about raising rates. Nevertheless, if we had to risk a prediction we would say that the Fed may be pleasantly surprised by the GDP growth rate in Q3 as well as by wage inflation, and thus may tighten rates before it is expected.

Let’s return now to our theme. The unacceptably high long-term unemployment rate is a confirmation of the confused disequilibrium state of the US and the global economy. In this state of affairs the echoes of Milton Friedman’s question “Does Money Matter?” portray the confusion of policy makers who loudly and consistently reply in a monotonous chorus “Only Money Matters”! 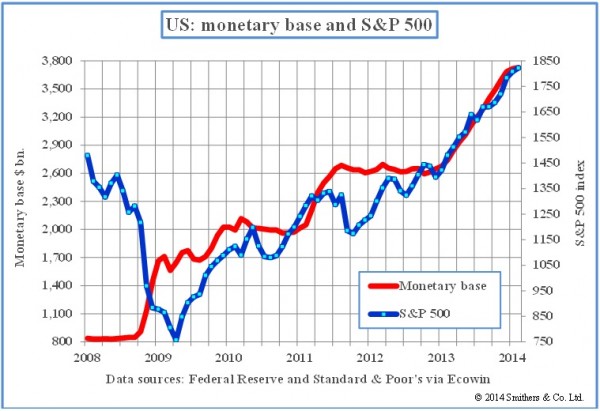 The pumping of reserves into the banking system and the reverse repos that started last September signify the apotheosis of confusion regarding causes and symptoms. Let’s whisper one more time: a complex situation requires parsimonious actions that untie the Gordian knots.

The graph below shows the effects of regulation in the US economy. If regulations are reduced, and the complex labyrinth of restraints is simplified, then the economy will be allowed to breath freer which will boost productivity, employment, and incomes. As shown below, the difference is huge: $38.8 trillion dollars. Even if we discount this figure by 70%, more than $11 trillion dollars could be available in the economy today if we applied parsimonious principles of policy making. 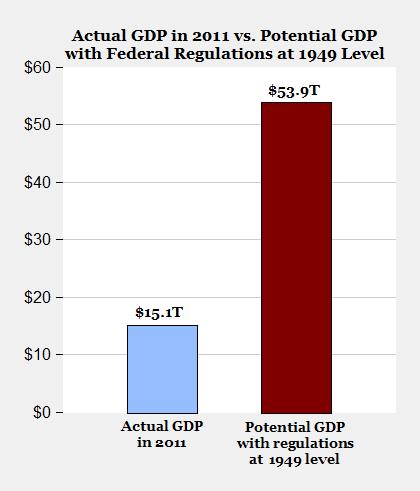 Let’s close by bringing the European malaise into the picture. Over the course of the last two weeks we’ve observed Italy falling into a triple recession, France recording zero growth rate, and Germany (The engine) portraying a negative growth rate. It has long been our argument that the EU is the crown jewel of bureaucratization, run by Eurocrats who have never run businesses in their lives knowing only to regulate and tell successful business people that they owe more taxes while hindering productivity growth. The EU is a wonderful vision and has a marvelous future as long as it unwinds its bureaucracy, relaxes its labyrinth of rules, and focuses on the free movement of goods, services, capital, technology, and people.

However, the confused disequilibrium that diminishes expectations in the EU has another dimension called shaky banks with tons of non-performing loans. In banking there is a simple measure known as the Texas Ratio. The latter divides the amount of bad loans by the amount of equity and cash that the bank holds. When that measure starts exceeding 70%, the bank is in very dangerous territory, since its cushions are threaten. Let’s review the Texas Ratio for some of the US banks: JP Morgan Chase has a ratio of 16%, and Citigroup’s ratio is 13%. Overall, the US banks enjoy a ratio of 15%.

What is the situation in the EU? Santander’s ratio is 70%, UniCredit’s ratio is 90%, and BNP Paribas has a ratio of 41%. How about then Deutsche Bank? Our humble reply is: who knows? With the myriad of synthetic structured products and the trillions of derivatives in its balance sheet, how could someone make a determination?

As last year’s report by the Danish Institute for International Studies demonstrated, the recapitalization of EU banks is almost nonexistent based on leverage ratios. As the report puts it: “The reported increases in risk-weighted capital ratios have been little but a smokescreen. Only 7 out of the 24 largest banks in Germany, France, Spain and Italy actually increased their leverage ratio. Furthermore, contrary to conventional wisdom, the least well-capitalized banking sector among the larger Eurozone countries is not the Spanish or Italian, but the German, closely followed by the French. Lastly, European banking would require a fivefold increase in equity capital to reach the levels recommended and hence remains highly vulnerable to shocks and dependent on various forms of state subsidies, guarantees and bailouts” (emphasis added).

Welcome to the world of confused disequilibria where perceptions are portrayed as realities! As you enjoy the upswing, start taking cover for the possible tsunami that may be