"Immigration and the Boston Terrorist Attack" 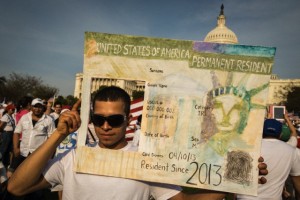 The terrorist attack in Boston should have minimum impact on immigration policy. However, it served to highlight the failure to share information and thereby violated at least one mandate of the Homeland Security Act of 2002 – to coordinate intelligence between the CIA, FBI and other intelligence-gathering services. The consequence of this failure, as we know, was deadly.

Additionally the attack emphasizes the importance of critically investigating all applicants for legal residence status, green cards and citizenship. Given recent history, such investigations are especially relevant when it comes to those seeking political asylum from states noted for fomenting and exporting Islamic terrorism. Humanitarianism suggests we can listen to requests, but we must be assured as to with whom we are dealing. Technology makes the job easier than it once was.

Political asylum should always be an option a caring and open nation should offer, but diversity should never be the goal, as some would have it. We want the smartest and hardest working immigrants who will endow their children with the same moral sense. Current wealth today should be less relevant in a decision regarding citizenship than the ability to produce wealth tomorrow. While we should offer people an opportunity, we should demand that they learn English, American history and understand and obey our laws. New immigrants should be drawn by the culture that has helped make this nation great: the strength of family, rule of law, a work ethic that includes aspiration and a sense of personal responsibility, the concept that there will be winners and losers in all endeavors, a moral certitude as to right and wrong and tolerance for all but the intolerant. Diversity (an unseemly buzzword) is fine individually, but it should lead to unity within the community. All who seek citizenship should do so because they want to be Americans – not Hispanic-Americans or Chechnya-Americans.

Immigration reform is something most Americans agree needs to be addressed. However, it is an issue that garners tremendous emotions because we have allowed extremists on both sides of the issue to control the debate. And, too many of our political leaders are concerned about appealing to their base and their bids for re-election, than in doing what is morally principled.

We should never forget that the United States was formed by immigrants. They came to escape tyranny and because of their belief in individual freedom and self-determination. In 1630, when John Winthrop immigrated to America, he saw New England as a ‘City on a Hill’ where people could create their own government and worship as they chose. Despite the preponderance of the founders being of British heritage, America was already a polyglot nation by the time of the American Revolution. At that time, Noah Webster noted that more than 50 languages were spoken in Pennsylvania alone. In that regard, we may not be unique, but we are far from the norm. If I were to emigrate to Spain and my neighbor to Japan, nether of us would ever be Spanish or Japanese. On the other hand, should a Spaniard or Japanese emigrate to the U.S., both, in a few years, would be considered Americans. And we should not forget, most of those who come to this country are driven by a desire to make a better life for themselves and their children. They are aspirational. That fact applies to those who cross the border from Mexico, or arrive here on a scholarship to one of our universities.

More recently, there has been a problem with the children of immigrants who seem to see the United States as a punch bowl from which to drink deeply. The cause is cultural and societal. They live in segregated neighborhoods, but so did the Irish, Italians and Norwegians. In large part, the fault lies with our politicians. They find it easier to appeal to constituents by compartmentalizing them, emphasizing the differences rather that the commonalities. Moral relativism means that new immigrants fail to learn and understand our own standards, which have developed over the centuries and continue to adapt. Our schools, thinking they are doing them a service, teach them in their native language – a path that inexorably leads to a subservient lifestyle. Regardless of the cause, this is a fact noted by sociologists Edward Telles and Vilna Ortiz in their 2009 book, Generations of Exclusion, a book highlighted by Ross Douthat in Sunday’s New York Times.

We all know that the history of the United States is not without its imperfections. There is no way one can gloss over our forbearers for their treatment of Natives Americans. However, the government those pioneers created and the culture that ensued has never been equaled in the history of mankind, in terms of its fairness and its respect for the rights of others. It is a history of which to be proud and it is one that should be taught to all who want to live here. A reading and understanding of American history is necessary to understanding the nature of freedom and liberty. The reading of our history also teaches that the individual rights enunciated in the first ten amendments of the Constitution are natural; they are not handed down imperiously from some magistrate or legislator.

In terms of immigration, we are faced with two major problems – what to do with about 12 million illegals who are already here and secondly, securing the border against illegal crossing, especially against criminals and terrorist. We must provide reform that includes a pathway to citizenship. Having almost 4% of the population of the United States living in the shadows is neither healthy nor economically wise. With no legal status they are harder to track, thus could be more prone to criminal activity. They are consumers of government services without being contributors. Additionally, it is unfair to their children who will grow up seeing themselves as permanent outsiders. And they should not receive priority over those who have chosen to enter the country legally. At the same time, border crossings must be made secure, without being turned into an “iron curtain.” Neither change will be easy; both will require settling for something less than perfect.

The consequence of a successful immigration policy is a rapid and smooth assimilation. The emigration of Muslims to Western Europe is an example of what not to do. Instead of adapting to the customs of the country to which they have chosen to emigrate, they insist on bringing with them the culture and moral teachings of the country from which they were trying to escape. This can be seen in the political influence of the Imams, the pushing for Sharia law and the wearing of burkas by women. Citizenship, in fact green cards and temporary visas are not rights; they are privileges. When immigrants violate the laws of their adopted country they must understand they are subject to deportation. We can be neither shy about using that term nor squeamish in tossing undesirables out.

The United States grants citizenship to about one million people every year. And, the estimates are that about 500,000 people enter our country illegally, putting a disproportionate burden on our border states. Our attitude should be one of welcome, but if you come you must learn our customs, which if anything is about tolerance. You must learn our language, so that you can rise economically. You must read our Declaration of Independence and the Constitution, so as to understand the value we put on rights. You must read our history, how the nation was formed and the principles that guide it; and of the sacrifices that have been made by so many so that future generations can live freely. You must aspire to be a contributor, not a taker.  You must assimilate – you must become an American.

The terrorist attack in Boston demonstrated some of the weaknesses of the present system. It argues for the enforcement of existing laws and demands greater vigilance and cooperation between intelligence agencies. But it should not stop the debate over immigration. That a man who had been tagged at least twice by different intelligence agencies, and of whom we were warned by the Russians, was able to return after six months in one of the hotbeds of Islamic jihadists terrorists signifies a lack of common sense. But it does not mean we should shut our borders. We do not want to become xenophobic, but neither should we be careless. The welfare of the many must take precedence over the right of someone like Tamerlan Tsarnaev to come and go as he pleases. His brother Dzhokhar gave up his rights as a legal immigrant the moment he and his brother planned the attack. As the survivor, he should be treated as the enemy combatant he is, rather than the common criminal our justice department would have him be. We must be magnanimous, but we must also be ever-watchful – “trust, but verify,” as President Reagan might have put it.

The views expressed on AustrianCenter.com are not necessarily those of the Austrian Economics Center.
hayek_admin2019-01-14T06:49:06+01:00