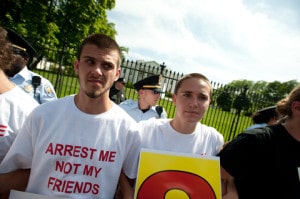 America is about protecting the rights and freedoms of its individual citizens. In doing so, it allows them to pursue their dreams within the confines of a society that functions under the rule of law, without fear of persecution for reasons of race, religion, sex or political affiliation. A government that is comprised “of the people, by the people, for the people” is, by definition, more concerned with individual liberties than administrative efficiency. As such, it has long served as a beacon for the aspirant. We all know of stories from the thousands of men and women who came to these shores with nothing but a few dollars to their name, yet who stayed, saw needs, worked hard and built fortunes.

But America is more than that. It is also a lodestar for the oppressed. More than any other nation, America is compassionate. “Give me your poor, your tired, your huddled masses,” are words on a plaque on an inner wall of the Statue of Liberty – America’s great symbol of immigration. But, keep in mind, in 1903 when that plaque bearing Emma Lazarus’s words was erected the promise of aid embedded in her words would be from individual donations. Laws for public assistance had yet to be enacted. Ms. Lazarus was not thinking of the government when she wrote those words; she was expressing the compassion of the people.

Today, about half the federal budget, or roughly $1.8 trillion, goes to social service programs like Medicare, Medicaid, Social Security, unemployment, food stamps and disability payments, veteran benefits and other social programs. Additionally, according to the National Philanthropic Trust, individual Americans donated $241.32 billion to a variety of charitable causes in 2013. Because of government involvement, the definition of poor has changed dramatically from when I was young. And that has been a good thing. But it has come at a cost. One has only to drive on New York’s pothole-infested streets, or deplane at LaGuardia Airport to experience our crumbling infrastructure. One has only to consider the test scores of our students to understand how poorly we have prepared our youth for the dynamic world they will inherit.

Understandably, that roughly $2 trillion which is spent on social services and myriad charities, along with the American character which is renowned for its generous spirit, act as a magnet to the world’s oppressed. Each individual child that has trekked or been bussed across the roughly 1500 miles between Honduras, San Salvador or Guatemala and the Rio Grande has a heart-rending story. However, commonsense says the U.S. cannot accommodate them all. It is well and good for reporters to detail the individual sad stories, and it is easy for Pope Francis to say that everyone should have “a new outlook toward migrants and refugees.” No one wants to play Lionel Barrymore’s Mr. Potter in this real-life saga, yet decisions will have to be made dispassionately.

There are evil people in this story, but they are not Republicans and they are not Democrats. They are the rulers of those nations whose policies have bankrupted their people and chased children from their homes. They are the smugglers who made parents pay a year’s wages and more to transport their children, on the promise of a new life in the United States. They are the church and intellectual leaders of those countries who have permitted a culture to take root that encourages tyranny and its offspring – corruption and poverty. As a country, we have been placed in a situation that requires the wisdom of a Solomon, but there is none to be found – not in the White House, and not in the halls of Congress. Every crisis is seen as a political opportunity to blow one’s horn and/or castigate the opposition.

Unfortunately, as big as our country and our hearts may be, we cannot save every child, nor can we derail every dictator, nor imprison every child smuggler. What we can do is follow the lead of Herbert Hoover 100 years ago this summer, when he established the Commission for the Relief in Belgium, by helping those in need in their own countries. We can live our own lives as exemplarily as possible, with the hope that some of what we might do proves contagious. We can provide our own citizens the tools they should have, especially in terms of education, where the interest of the child should always come before the demands of unions. We must acknowledge that much of our strength is in our diversity, yet recognize that the vast majority of those living here illegally represent one of the most uniform waves of immigrants in our nation’s history. We must wean those who are capable off the corrosive path of government dependency. We must learn to live within our means, with the understanding that we cannot be all things to all people.

We must reform immigration laws to encourage the most productive to emigrate to our shores, and we should offer work permits to seasonal workers, so that they can come and earn money, pay taxes and live outside the shadows of the clandestine existence they are forced into under today’s rules. We need to tighten the borders to dissuade those coming without visas, and to stop terrorists and the illegal transportation of drugs and weapons.

We should also never forget we are a nation of immigrants and thank God everyday for the fortune that finds us in this country. Socially, culturally and economically anyone who is willing to invest time and effort can become American. Immigrants to Germany, Bolivia or Japan do not become Germans, Bolivians or Japanese. For selfish reasons we should want the best and the brightest to become citizens, but in a nation of our complexity and size we need and should welcome all sorts – everyone from engineers, to artists, to field hands. But that will require better control of our borders. Immigration is a positive. There is no need to consider it negatively.

We must be compassionate, but we must also be realistic. We cannot let videos of frightened, scared children dictate our behavior. Escorting children back to where they came may seem cruel and hard-hearted, but it may be the only way to stop the smuggling and the heartless way children have been yanked from their homes and sent on dangerous voyages across an inhospitable land. America stands unique among nations for many reasons, but it has been a successful, liberal, democratic republic for over 200 years because it functions under the rule of law. Adhering to existing laws, with an Executive charged with their implementation, a Congress to enact new ones or amend old ones, and courts to determine their constitutionality, is integral to our future as a people’s republic.

Even as time alters the world, people and the way we live, a beauty of America is that institutions endure, as should our moral fiber. The characteristics we look for in immigrants have not changed. Nor should they. We want those who will help keep this nation exceptional. No matter the urgency of the current crisis, writing a check for $3.7 billion, without qualifications, is not the answer. It surrenders Congressional oversight responsibility to the Executive Branch. It implies that solutions are determined by dollars spent, it ignores reality and it only postpones a growing problem that will have to be addressed at some point. Why not now?

The views expressed on AustrianCenter.com are not necessarily those of the Austrian Economics Center.
hayek_admin2019-01-14T06:15:41+01:00