Individual Self-Determination vs. Ukrainian or Russian Nationalism, Part I 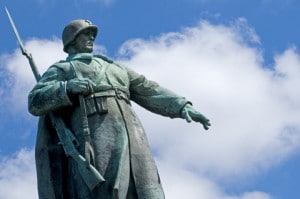 The imposing statue of a soldier atop the Soviet War Memorial in the Tiergarten, Berlin, Germany. Image by © Dreamstime

The Ukrainian-Russian crisis over the de facto occupation of Crimea by Russian military forces, which has enveloped the concerns and fears of the world over the last weeks, revolves around two conflicting claims of national self-determination. It has, once again, brought with it the danger of war on the European continent.

What is this conflict about? It concerns the issue of how it will be decided under what political authority people will live.

Americans do not easily understand the anger and fear this issue has for many in Europe and other parts of the world, and why it can result in such potential or actual violent conflict.

The American Philosophy of Individualism

The American political system was based on a philosophy of individualism. That is, each individual is recognized as possessing certain inalienable rights to his life, liberty, and honestly acquired property. The individual is not the property of an absolute monarch or an arbitrary majority.

Under the traditional American system, virtually every area of human life was viewed as the private affairs of the individual who had that inalienable right to guide and design his life according to his own values, beliefs, and purposes. Interpersonal relationships in society were formed, took shape and changed over time based on the voluntary and mutually beneficial associations and exchanges into which people freely entered.

In the social arena this individualistic philosophy implied that people should be judged as individuals, and not on the basis of such “accidents of birth” as language, religion, ethnicity or race. Of course, and unfortunately, people in their social interactions with others have not always consistently practiced this ideal. Americans, in their private life, too frequently have judged others and acted on the basis of racial, religious, linguistic or other group prejudices.

However, where such racial prejudice was still legally imposed as in the southern states until the 1960s in the form of segregation laws, it was recognized by more and more Americans to be inconsistent with and an offense against the founding principles of the country, and which could not stand in the long run.

Private prejudices and discriminatory acts on the basis of race, religion or language surely might be morally reprehensible but were a part of an individual’s freedom to decide with whom to associate. However, such discrimination was not supposed to be brought into the arena of governmental social or economic policy since this was considered to be violations of individuals’ rights by using the power of the state to harm them on the basis of a collective classification of their identity.

Americans also have been a highly mobile people. From colonial times, Americans always have been open to “moving on.” That nineteenth century phrase attributed to Horace Greeley, “Go west young man,” has been the cultural motto of the nation. Immigrants came from faraway countries and spread across the continent, as did every generation of the native-born Americans.

While the continent has been “conquered” and settled long ago, Americans still pick themselves up and change in what part of the country they live and work far more readily and frequently than most Europeans do in their own part of the world.

The lowering of the migration barriers within the European Union is changing this, especially among the younger generation of Europeans, but it is still, in general, less than among Americans. People in Europe, due to their relatively greater immobility, have traditionally felt a stronger “connectedness” to a specific and local geographical area.

Europe’s history is grounded in a philosophy of collectivism, the idea that the group comes before the individual and that his identity and sense of meaning and purpose is tied to the particular “tribe” into which he has been born.

One of the most powerful modern variations on this collectivist theme has been nationalism. Before the demise of monarchism in the late eighteenth and early nineteenth centuries, the individual owed his allegiance to the king or emperor who claimed to own and rule over all and everything with absolute authority in his domain, and usually by asserted “divine right.”

But with the coming of the French Revolution in 1789, all this began to change. With the end of monarchy, the issue arose, “If not to the king, to whom does the individual owe allegiance?” It was declared that within the boundaries of what had been the territory of the former king, the new ruler was “the people” themselves. The “nation” was the new collective to which the individual owed his allegiance and for which he should expect to sacrifice himself if the good of “the nation” required it.

But what defined a “nation” or a “people” as one collective group versus another? Some of the advocates and propagandists of the new nationalist ideal of human identity spoke of a common culture or set of traditions extending over many generations that shaped and made the individual’s sense of who he was and to whom he was connected.

Others spoke of language or race as the unifying determinate of what bound a people together as “one” in terms of national belonging and common destiny. The structure of language and the meanings of words shape how a group of people think and reason, it was said, thus, binding together all those speaking the same language. Even deeper, it was argued by others, was the connection between those coming from the same genetic stock; the collective identity and sense of “oneness” among a group of people was “in the blood.”

All of these ways of identifying a people’s common nationality were also often linked to a geographical area in Europe that for long period of time, it was claimed, marked off the historical or “natural” homeland of the people sharing that common collectivist root.

The rise of nationalism in the nineteenth and early twentieth centuries now saw the call for all “suppressed peoples” (that is, those minority national groups living within a country dominated by the majority of another nationality) to have their own nation-states to preserve and protect their language, cultural and ethnic uniqueness.

In addition, since under the monarchical system lands had been conquered or acquired through royal marriages that had nothing to do with those “natural” geographical boundaries of various national groups, borders needed to be redrawn. The political borders of countries, it was said, should reflect the national groups that lived within those areas.

There was a problem, however, especially in Central and Eastern Europe. Hundreds of years of wars, conquests and migrations had created overlapping areas of “mixed” national populations. There was little way to nicely and neatly draw the political lines on the map so that only those of a particular national group lived within that national group’s borders.

Every nation-state invariably contained within its political boundaries one or more minorities belonging to other linguistic, cultural or ethnic groups.

Now, if the same individualist and (classical) liberal philosophy that was at the foundation of the American political system also had been present in Europe, there would have been no or few “conflicts” between different national groups living within the same country.

Some people might have found it personally irritating or inconvenient that some of their neighbors spoke a different language, or practiced a different religion or had different cultural traditions and manners. But if their political systems had been based on those same liberal individualist principles as America, then there could have been no politically bestowed favors or privileges for the benefit of those in the majority national group at the social and economic expense of the members of any national minority groups.

But, alas, and again especially in Central and Eastern Europe, this was not the case. Governments were elected or came to power that viewed it as their purpose to secure and safeguard the interests and improvements of the majority national group. Government interventions, regulations, and restrictions were implemented to benefit the one group at the expense of any others. And sometimes this included acts of vi