Inequality and an Ideology All My Own 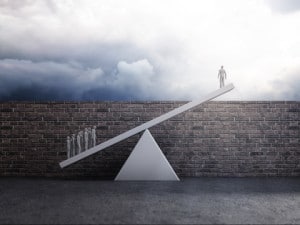 I have trouble with political labels. I understand they are convenient for political reasons, but they miss the essence of the individual. Compartmentalization works to the advantage of politicians, pollsters and the media, and fits a nation sickened with attention deficit disorder. Instant messaging and Twitter feeds are the way we communicate. Interviews are relayed to viewers in sound bites, designed to fit the political philosophy of the cable station or network running them. Political ads run thirty seconds. Since the principal goal of a political candidate is to get elected, he or she would rather mimic the polls. The last thing any politician wants to do is explain a complex situation that requires thought and reason. Either they don’t understand the problem, or they believe we are incapable.

As humans, we are complex. After almost seven years of writing this column, I thought it useful to more fully explain my beliefs regarding inequality. I get pegged and boxed like everyone else. Some may be surprised; others not, but in fairness I thought this digression worthwhile.

The question of equality is on everyone’s mind. My belief is that the world is Schumpeterian. Change is always with us, and for the most part, the new and the better knock off the old and less viable. There are obvious exceptions, but, on balance, change is healthy. There are times when change is slow and other times when it is revolutionary. We are living through one of the latter periods. But change is also destabilizing. It puts at risk, as do all evolutionary forces, those least capable of adapting.

Inequality is our natural state. There have always been utopian dreamers who have sought a world that was totally equitable. But men and women differ intellectually, physically, emotionally and in their character and aspirations. Some are diligent and hard working; others are careless and lazy. Cynically, both Communism and Nazism promised redistributive equality, but obviously delivered something far different, including oppression and forced inequality.

Our nation was founded with the principle of equality under the law, which is a right, and with the promise of equality of opportunity, which is a worthy, but ultimately unattainable, goal. Some are born to wealth, others to poverty; some to homes with book-lined walls, others to the illiterate; some in cities, others on farms. As a society we can set goals of equal opportunity, but we mislead when we promise what can never be realized.

The state, though, does have a responsibility to ensure that the stairway to social and financial success is available to all. The mark of a fair society is the ease with which intelligence, aspiration and hard work make that escalator accessible.

And that depends on education. We should ensure that the best public school education is available; so that all children have the best possible shot at success. We have failed in that regard. While Vouchers and Charter Schools provide needed competition to a system that is mired in corruption and ineptitude, unions act as obstructionists. They persist in protecting poorly performing teachers and retaining underperforming schools. Too many traditional public schools measure success by longevity, not results. Too often they protect the incompetent and ignoble. The best way to help youth adapt and to ensure economic success and social mobility is to reform the unions that represent teachers and staff.

Creative destruction is what allows business practices and technologies to evolve. (It is why competition in schools may be unwelcome by unions, bad teachers and inept administrators, but is good for students.) But transitions are difficult. The industrial age brought opportunity to the smart, aspirant and opportunistic – to the risk taker. The blacksmith gave way to the auto mechanic. Mechanical parts in cars have been replaced with electronic components. In the 19th Century, such advances allowed entrepreneurs to rise above the landed gentry. That era gave birth to a new monied, merchant class. In our own age, the internet has radically changed the way we communicate, shop, study and write. It, too, has brought untold riches to a small number of people, and has provided convenience and savings to millions more. Unfortunately, it has also meant that thousands of workers have had to learn new skills, in order to stay employed.

We can see the effects of creative destruction today, in national and local bookstores trying to compete against Amazon. We see it in traditional taxi companies being challenged by Lyft and Uber, and in hotels and motels being threatened by Airbnb. Will some people and businesses suffer? Of course, but is that reason to stop progress? Should consumers be required to pay more because their traditional supplier could not sell books, provide taxi rides or hotel rooms at competitive prices?

Unfairness is often the consequence of government intervention – sometimes unintended, but often intended. The Federal Reserve, in keeping interest rates at abnormally low levels, has benefitted the wealthy at the expense of the retired and poor. Regulation costs the economy an estimated $1.9 trillion annually. Some of that is necessary, but much is a result of cronyism, where large and powerful companies act in cahoots with politicians to design regulations to protect them against small and midsize would-be competitors (think “too big to fail” banks and Barnes and Noble). Complexity in the corporate tax code (think businesses like GE, and those public companies that use options excessively) is a consequence of politicians granting favors to special interests. Public sector unions pit government employees against taxpayers, in protecting jobs, some of which are as useful as a fireman on a high speed train.

But the biggest factor in creating inequality has been the willingness of a small number of creative entrepreneurs to take a chance. When we look back on this period from the perspective of a few decades, I believe it will be seen as one of the more creative periods in our commercial history. From fracking to mobile apps, our lives have been changed – mostly for the better and mostly in spite of what government has done.

Unfortunately, in our interest to be fair we have created a form of corporate welfare that makes more difficult the creative destruction that is natural to society’s advancement. It was our desire to be fair that led to the destructive lending practices and ultimate collapse of Fannie Mae and Freddie Mac in 2008. Europe is leading us in this regard, which is one reason for their slower economic growth. Theirs is the direction “compassionate” socialism leads.

In the end, what I want is no different from what most people want – individual freedom, government that keeps us safe at home and abroad, provides a viable infrastructure and that protects those basic principles found in our Constitution. I believe we should be free to make mistakes and rewarded when success comes our way. I want an economy that grows well, so that more people can be employed. I want an education system that will allow my grandchildren to do well. We must make sure we have a system that allows the elderly, the very poor and the incapacitated to lead lives with dignity. We must provide training to those whose jobs have been displaced. But we should not breed dependence, nor should we make false promises that we know can never be realized, and we should abandon any pretense that the world will one day be equitable for all.

I believe in the essence of personal responsibility and fear the debilitating effects of dependency. I believe that a moral sense, based on mutual respect, is critical in a civilized world. Overseas, I recognize that strength is imperative to peace, for there are tyrannies that find our way of life at odds with theirs.

The views expressed on AustrianCenter.com are not necessarily those of the Austrian Economics Center.
hayek_admin2019-01-14T06:10:02+01:00