Inflation in the Offing? 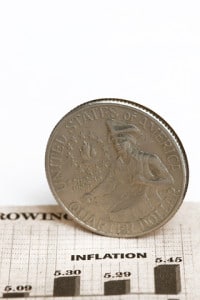 I am not an economist, so the following observations should be considered in the context that they represent only the thoughts of a casual observer. But I have read, as have most of you, Milton Friedman’s explanation of inflation, that it “is always and everywhere a result of excess money growth.” The monetary base has expanded exponentially – from $949 billion in September 2008 to $3.9 trillion in March 2014, according to data from the St. Louis Fed. Can inflation be far behind?

It has long seemed commonsensical when looking at markets to take note of extremes, especially when one’s analytical capabilities are as limited as mine. The extraordinary high prices people were paying for technology stocks in the late 1990s was such an example, as was the complacency that descended on equity markets in late 2006 when the first signs of the mortgage problems were beginning to sprout.

Today, when we look at markets, the extremes appear to be in interest rates, where an investor gets paid a measly 2.55% for holding Ten-year Treasuries, versus almost 4% at the height of the financial crisis in 2008 and 7.8% twenty years ago; in the extraordinary increases in the Fed’s balance sheet over the past five years from under a trillion dollars to $4.2 trillion today, and in the $2.5 trillion of idle reserves sitting on bank balance sheets, up from just over $800 billion just before the credit crisis.

These are extraordinary changes, the consequences of which have yet to be felt. (And, of course, we will only know their full effects in hindsight.) But they are worth considering. Treasury rates are lower than they have been at any point during my 47 years on Wall Street, other than last summer when they were 100 basis points lower. According to Sidney Homer’s A History of Interest Rates, at no point did Treasury rates in the U.S. get as low as they did last July when the rate on the Ten-year momentarily dipped under 1.4%. Counter intuitively, rates have fallen as Treasury borrowings have increased. Between 2006 and 2013, combined Federal budget deficits have amounted to $6.7 trillion. One reason rates have stayed low – probably the principal reason – is that the Federal Reserve has financed over $3 trillion of those borrowings.

Aggressive central banks and low interest rates are not just U.S. problems. Spanish and Italian bonds are now priced to yield 2.9% and 3.0% respectively, making U.S. Treasuries look relatively cheap. Bonds have been in a bull market for over thirty years. Perhaps that bull run ended last summer. I don’t know. The only conclusion one can safely conclude is that there is an unhealthy level of complacency in bond land, with expectations favoring deflation, not inflation.

The expansion of the Fed’s balance sheet to $4.2 trillion has served to keep interest rates abnormally low, masking the real cost of government’s expansion. While such easing may have been justified to help jumpstart the economy in 2009, especially housing, it has allowed government’s interest payments to remain abnormally low and has fueled asset price appreciation. In 2013 the average interest rate on U.S. federal debt was 2.4%, which would compare to 6.6% in 2000. The interest cost paid in 2013 amounted to $222 billion, but that calculation does not include debt owned by government agencies, such as Social Security. If one applied the average interest cost of 2.4% against the $17.3 trillion in total federal debt, the amount owed would equal about $415 billion. Stated interest costs of $222 billion represented 6.2% of federal spending in 2013 would compare, according to Pew Research, to 15% in the mid 1990s. The reasons for the decline can be explained by a decline in rates, but more importantly because outlays have risen 39.4%, principally due to increased entitlement programs. Mandatory spending, which includes interest costs, continues to take a bigger and bigger portion of federal outlays. The effect is to limit the options the country has when it comes to programs like defense and infrastructure. When interest rates rise, which they will at some point, the squeeze on discretionary spending will only get worse.

The positive economic effects of the Fed’s expansionary increase in its balance sheet by over $3 trillion was largely offset by a contraction in potential bank lending, as $2 trillion has been added to banks excess reserves. The consequences have not been pretty. Retirees have had to take more risk, as interest rates are unusually low. While unemployment has come down, the main explanation has been the withdrawal of workers from the labor force. The promotion of the Affordable Care Act, while the economy was still in recession, reflected Mr. Obama’s preference to put redistribution ahead of economic growth.

Idle reserves sitting on bank balance sheets reflect a lack of corporate investment. In October 2008, then Fed Chairman Ben Bernanke authorized the paying of 25 basis points on reserves, as a means of helping banks steady their balance sheets, while reducing their incentive to lend. The effect has been to increase the monetary base, while keeping a lid on inflationary pressures. When the crisis hit in September 2008, excess reserves amounted to about $830 billion. Today they exceed $2.5 trillion, which means that the Federal Reserve is paying banks approximately $5 billion annually for doing nothing, for banks borrow from the Fed at essentially a zero interest rate cost.

It is the consequence of these three areas of excess and their unwinding that, in my opinion, raise the prospect for future inflation. With $17.3 trillion in debt that continues to mount, albeit at a slower pace than had been the case, it is in the interest of the borrower (in this case the federal government) to repay that debt with cheaper dollars, or, to put it more crudely but more accurately, to engage in currency debasement. Dollar depreciation is inflationary; it has been made worse by the fact that low interest rates hurt the thrifty and the elderly. The Dollar Index has declined by about one third since it peaked in the months following 9/11, from 120 to 80.

Tapering, or the gradual unwinding of the Fed’s balance sheet, has begun, with the Fed reducing purchases of Treasuries and mortgage backed securities by $10 billion a month. In other words, their balance sheet continues to expand, but at a slower rate. If issuance of Treasuries and mortgage backed securities continues at the same rate, the effect should be to gradually raise interest rates, which, all things being equal, should have an inhibiting effect on inflation.

Excess reserves held by banks are included in the monetary base; thus their expansion leads one to recall Mr. Friedman’s admonition regarding the causes of inflation. However, once those funds enter the economy through loans inflation is likely to tick up. So, like the Fed’s tapering, the release of those funds into the economy must be done at a controlled pace…if that is possible. Demand begets demand, and banking is a competitive arena; so they will get released, if we want to see further and more rapid economic growth. At some point the Fed will stop paying interest on reserves – they had never done so before 2008 – or they will have to increase interest payments, to deter lending, as rates begin to rise.

There is no question but that Washington is concerned about inflation; otherwise, why would they have changed the way it is calculated? Current Fed Chairwoman, Janet Yellen, has admitted that the Fed does not have a good model for inflation and she tends to rely on the Phillips Curve, which states that there is a tendency for inflation to rise when unemployment is low, and to fall when unemployment is high. Paul Volcker and Alan Greenspan felt that the Phillips Curve was unreliable, according to Allan Meltzer of Carnegie Mellon, and preferred Milton Friedman’s dictum mentioned in the first paragraph – that inflation is always a result of
excess money growth relative to the growth of real output.

Money growth, whether measured by the monetary base or M2, has increased substantially above the rate of real GDP growth, thus far without leading to inflation, oh has it? Certainly, the Fed’s policy of keeping interest rates low has had the effect of causing asset prices to rise – oil, equities, bonds, gold, gasoline, education and food commodities are all higher than they were five years ago. In the month of April, wholesale food prices rose 2.7%. Is that an omen?

Have we become too complacent regarding the outlook for inflation? John Maynard Keynes once wrote: “By a continuing process of inflation, governments can confiscate, secretly and unobserved, an important part of the wealth of their citizens.” I am uncertain, but suspect complacency. We do know that the dollar has depreciated for twelve years, that ultra low interest rates benefit debtors (like the government) and harm creditors, that government has changed the components of the CPI and that the essentials – food and energy – have risen the most. We also know that such increases are regressive, affecting the poor far more than the wealthy. Vigilance is warranted.

The views expressed on AustrianCenter.com are not necessarily those of the Austrian Economics Center.
hayek_admin2014-05-19T12:20:39+02:00