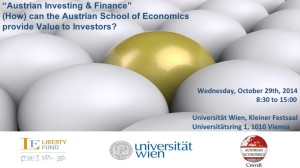 “Austrian Investing and Finance”
(How) can the Austrian School of Economics provide Value to Investors?

On Wednesday 29th October, the Austrian Economics Center, in conjunction with Liberty Fund and Universität Wien, hosted a one-day conference entitled “Austrian Investing and Finance: (How) can the Austrian School of Economics provide Value to Investors?”

The Conference began with a presentation by 2014 Hayek Lifetime Achievement Award recipient Deirdre McCloskey, who presented an ‘Introduction to Austrian Values’. McCloskey looked critically at modern french economist Thomas Piketty’s analysis of supply and demand, and stressed the importance of embracing Austrian ideas and economic principles beyond the realm of finance.

Thomas Gehrig from the Faculty of Business, Economics and Statistics at Universität Wien then presented ‘What’s so special about the Austrian School?’. Gehrig provided an interesting snapshot of the development of the Austrian School, from its origins (Menger) to today (Kirzner).

Peter Brandner from Universität Wien and McCloskey provided an engaging discussion during the Conference’s Q&A component, which was later followed by a presentation by Chief Economist at Blacksummit Financial Group, John Charalambakis, who spoke on ‘Austrian Finance & Investing in Times of Uncertainty’. Charalambakis stressed the importance of listening to and understanding market signals, and how fatal it can be when they are ignored, using excellent examples ranging from the Russian default, the Asian turmoil of 1997 and the Japanese stock market bubble. He later discussed how safe the banking sector is in Europe and provided examples that provided a sombre reminder of the current situation.

Frank Shostak’s presentation ‘Boom-Bust Cycle and Money Supply’ outlined the startling reality of money ‘creation’ by central banks, and the problems that it causes for the economy. The presentation emphasised the clear fact that many politicians and citizens often forget; that money creation diverts real wealth from wealth creators to those who have produced nothing, which can have significant negative consequences on inflation and the monetary system.

‘Austrian Investing: Investing between Inflation and Deflation’ by Ronald-Peter Stöferle (Managing Director and Partner of Incrementum AG, Liechtenstein) provided an interesting snapshot of the current monetary system and explained how deflation is being used as an excuse for greater central bank intervention. This was later followed by a Q&A session featuring Markus Fichtinger, Senior Researcher.

Mark Valek from Incrementum AG followed on with a presentation entited; ‘The two major misconceptions about Gold and their implications for Investors’, which was later followed with a detailed analysis by “bitcoin-economist” Peter Šurda on the infamous digital-currency- saga and the regulatory perspectives on virtual currency markets.

Nikolaus Jilch, journalist from Die Presse, finished off the conference with an informative Q&A.

We would like to thank our speakers for providing such engaging presentations on this very important topic.

The views expressed on AustrianCenter.com are not necessarily those of the Austrian Economics Center.
hayek_admin2019-01-14T06:09:10+01:00