“Internet Sales Tax – A Trojan Horse for a VAT?” 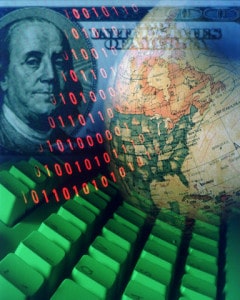 Parkinson’s Law tells us that the stuff we accumulate expands to fill the space available. At home, with books piled on the library floor, my wife often tells me I am in violation. In the same way, the more money a politician has access to, the greater will be his desire to spend. We can be assured that any taxes raised by an internet sales tax will not be used for reducing debt. They will be used to increase spending.

Our economy is growing, albeit sluggishly, and we are badly in need of jobs. More government, whether federal, state or local, is not the answer, whether it is at the local, state or federal level. As Winston Churchill so graphically put it: “We contend that for a nation to try to tax itself into prosperity is like a man standing in a bucket and trying to lift himself by the handle.”

A sales tax is an aphrodisiac to a politician. It is stealth-like and seemingly innocuous, in that it requires only small layouts per purchase, making it almost invisible and relatively painless. Were it to be aggregated annually, taxpayers would have stronger resentments. It is also regressive and it raises prices. Don’t think for a moment that the retailer will swallow the tax and the cost of its implementation. The costs will be passed on to the consumer. For example, in the case of the proposed Marketplace Fairness Tax, it would require every on-line merchant with sales in excess of a million dollars to collect (or be able to collect) sales taxes for all of America’s estimated 9,600 state and local taxing authorities. Amazon is the giant of on-line sellers and it endorses the new tax. Of course, the fact that Amazon sells its own tax compliance service to other merchants helps explain their position. Amazon is also interested in building additional warehouses – distribution centers, or “fulfillment centers.” They currently have about 40 centers in about 15 states, giving them an expanding national presence. And, with each warehouse planned, new tax breaks are negotiated.

The bill has received bi-partisan support, including a hearty and unsurprising endorsement from the President. Remember when Mr. Obama suggested that taxes will only be raised on “millionaires and billionaires – they can afford to pay a little more?” Well, this tax is regressive, which will hit all consumers equally. The Senate voted on Monday 74 – 20 to open debate on the measure, which could mean the bill will go to the Senate floor by the end of this week. It would then move to the House, where its future is less certain. Today’s debate stems from a 1992 Supreme Court ruling that determined a state cannot force a retailer to collect sales tax unless the retailer has a physical presence in that state. To a large extent, with the notable exception of Amazon as noted above, the bill pits brick and mortar retailers against those that sell on-line. It also pits states with sales taxes against those without, which accounts for the bi-partisan support.

Wall Street is concerned that the adoption of an internet tax will lead to a tax on financial transactions. That is probably true and a worthy concern; for every politician is always on the lookout for new sources of revenues. Remember President Reagan’s quote about government? “If it moves, tax it. If it keeps moving, regulate it. And if it stops, subsidize it.” Thus far, sales taxes have been the purview of states. And the Marketplace Fairness Tax is a tax that would be collected for states. But it requires the imprimatur of Congress, and once Congress gets its claws into a tax, it is like giving red meat to a hungry lion – it will be devoured, not saved, and the lion will want more. The question then becomes: will a VAT be far behind?

The biggest problem with a sales tax of this nature, besides being a harbinger, is that it is regressive, both from the perspective of the retailer, as well as from that of the consumer. While it is being called a Marketplace Fairness Tax, it is anything but fair to small businesses and lower-income consumers. Large companies will find it far easier and, relatively, cheaper to set up the programs necessary to collect the tax. In a discussion on this topic, Andrew Ross Sorkin, in Tuesday’s New York Times, somewhat blithely retorts: “What Mr. Donahoe [John Donahoe, CEO of eBay] did not mention is that Amazon will already collect this tax for merchants if they ask, and eBay will provide them with third-party technology services that will help them do this, too.” I am sure they will – for a fee. Small businesses have no ability to negotiate the special tax treatments Amazon is able to receive when they make decisions as to where to erect the next warehouse. And, when someone on minimum wage buys a book from Amazon, he or she will pay the same tax as a “one-percenter.”

It is possible that a compromise will be reached and that those companies with less than fifty employees and $10 million in annual revenues could be exempted. That would be an improvement, but, like the Affordable Healthcare Act, it effectively puts a governor on rapidly growing small businesses – the engines of job growth.

There are some who suggest that Congress should not grant these new taxing powers unless it first requires states to accept a unified, simplified reporting form. Keep in mind, besides having to prepare tax filings for up to 9600 different tax authorities, on-line retailers would have to be prepared for dozens of audits from various states and municipalities. Having Congress mandate unified forms sounds like a good idea, except that it paves the way for a federal VAT.

Crocodile tears are being shed by many state and municipal office holders. They complain that revenues do not match expenses. In those states with sales taxes, blame is placed, by some, on the fact that internet sales are replacing sales from brick and mortar retailers, thereby depriving states of income they feel is rightfully theirs. There is some truth to that, but keep in mind internet sales comprise only about 8% of all retail sales, including food; so that loss does not account for the growing financial gap between intake and outgo. Everyone recognizes that the rate of growth in internet sales exceeds that in stores. Forrester Research projects that e-commerce will account for 10% of all U.S. retail sales in 2017. But their tears smack of the song, “Don’t Cry for me, Argentina.”

There are those who look at the deteriorated income and balance sheet statements of myriad government entities and determine more revenue is needed. There are others who review the same statements and decide more fiscal discipline is in order. If you had a son who was addicted to slot machines and, in general was a wastrel when it came to matters of money, would you refill his wallet, or would you send him to rehab?

The Marketplace Fairness Tax is certainly not fair, as it pits start-ups and small businesses against the giants and will add costs to an already strapped consumer. It will damage job creation, but the biggest risk is that it serves as a Trojan Horse for a VAT, the aim of all progressives who believe in the benevolence of an ever-expanding government.

The views expressed on AustrianCenter.com are not necessarily those of the Austrian Economics Center.
hayek_admin2019-01-14T06:49:11+01:00