The Irrationality of the Digital Tax

The digital tax is coming to Austria – or so it seems. The Austrian Parliament seeks to vote in September on the introduction of such a levy, which would tax digital companies separately, as part of the first packet of an – otherwise mostly promising– tax reform. There is a high probability that the bill will pass.

The digital tax is particularly popular tax in today’s Europe; from Italy to Great Britain, Belgium, and Spain, several countries are considering the implementation of this tax. In France it has already been introduced – and the results are not overly impressive, as of yet. 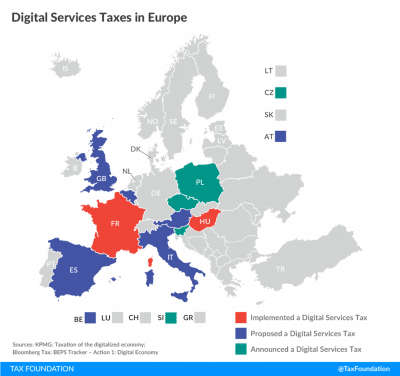 In France, a 3% digital tax was introduced for corporations with revenue exceeding 750 million euros revenue worldwide or 25 million euros domestically. Digital companies though, have other ideas on where the incidence of this tax will fall. Amazon has announcedthat it will simply transfer the tax to small- and medium-sized business which use the page to sell their products. Thus, Amazon is not hurt by the tax, but mostly French SMEs, which most likely will forward the additional costs to the consumers.

Other countries see tax as little more than protectionism. Digital taxes target major digital corporations. Those are rare in Europe – most of them are from the US. President Donald Trump certainly was not pleased and retaliated, threatening new tariffs on France, which would have ultimately affected French consumers again. Only a separate deal at the G7 meeting calmed Trump down (for now).

Experts have warned for long that the digital tax would be little more than a trade barrier. The German Wirtschaftsweisen, a group of prominent economists, arguedthat it would be a one-sided tariff vis-à-vis the US which would, indeed, violate WTO rules. Clemens Fuest from the German Ifo Institute expectsthat a digital tax would further worsen the trade war.

That a digital tax in Europe would almost exclusively hit American companies is seen particularly wellon the would-be Austrian model. In Austria, the digital tax would simply be an expansion of the already-existing 5% advertising tax, so that digital ads are included as well – at the moment, the tax only effects traditional advertisements that are not online. Here as well, however, only companies would need to pay the tax that reach the revenue of 750 million euros worldwide or 25 million euros in Austria threshold. This would only affect a handful of major foreign, foremost American companies. The former Chancellor Sebastian Kurz said himself that not a single Austrian business would be affected, while parts of the increased revenue through the digital tax would be used for the modernization of the Austrian media.

This means: foreign firms will be hit and the money will be sent to Austrians immediately. The same methods are used in the US to pursue their protectionist agenda – an agenda that Europeans are constantly complaining about. Sooner or later, it would be Austrians, however, that would be affected the most by it. The French case already shows this, but one also has to simply realize that companies would not accept higher taxes – i.e., higher costs – just like that, but instead would let those costs trickle down all the way to the consumer. Small Austrian businesses would also be affected by higher marketing costs. 53% of Austrian companies promote their products on social media. It will hardly be Facebook which pays the tax. The costs will likely be forwarded to those who actually buy ads on the page. As Daniel Bunn from the Tax Foundation writes, “the incidence of the tax will not necessarily fall on the companies, but on businesses that rely on the advertising platforms to obtain new customers.”

Why do European countries even want to implement such a “bureaucratic nightmare,” as the Bertelsmann Foundation calledthe digital tax? The primary reason is that governments argue that digital companies such as Google, Amazon, Apple, or Microsoft, don’t pay their “fair share” at the moment. This assertion comes from a documentfrom the European Commission, in which the Commission proposes a European-wide digital tax, an idea that failedlast year due to the opposition of multiple member states. In the study, the Commission claims that while traditional companies pay 23.2% taxes, digital companies only pay 10.1%.

As Matthias Bauer from the Brussels-based think tank ECIPE showed, however, this is based on misleading numbers. The Commission looked at the 100 largest companies on the basis of their market value and the five largest e-commerce companies. That means that the Commission only looked at a small minority of businesses and only used hypothetical numbers for the future, not actual profits.

The results are quite different if one looks at the actual revenue of the companies. In Bauer’s calculations, digital companies pay 29.1% corporate taxes in contrast to 27.7% by traditional ones. In another studyearlier this year, he also shows that this holds true for those “Big Tech” corporations from the US: from 2012 to 2017, Alphabet (which includes Google) paid 26.8% in corporate taxes, Facebook 27.7%, Microsoft 28.2%, and Amazon 38.2%. This is in contrast to the 24.1% which Germany’s biggest companies that are included in the DAX30 have paid in the same period. Indeed, large domestic companies like Renault, Volkswagen and the German Telekom pay less, not American “Big Tech” (more on this study can be found in an earlier articleof mine).

The German Ifo Institute meanwhile does see a gap between the taxes paid by traditional and digital companies, but here as well this gap is much smaller than the Commission claims. In their calculations, digital companies pay 20.9% taxes in total, while traditional ones pay 26.7%. If one wants to close this gap, Ifo argues, it would be better to reform the depreciation of the value of production plants or such, so that the tax burden decreases for traditional companies.

Thus, the argument that digital companies don’t pay enough is at the very least doubtful. The damaging effects of a digital tax could be immense in the meantime. Austria as well as the EU already lack behind in terms of attractiveness to invest and do business – it is for this reason as well, of course, that there are hardly any European corporations which would be affected by digital taxes: they simply don’t exist. A digital tax would prevent the emergence of these companies only further.

Despite all of this, it seems as though some countries can hardly wait to introduce a digital tax. It would be difficult to explain why that is if it wasn’t the case that any rational arguments against the digital tax have in many regards become completely ineffective at this point. Proponents of the digital tax have left the realm of rational, evidence-based policymaking a long time ago and have instead turned to irrational populism against “the evil rich, foreign corporations.” In the end, however, their own domestic companies and consumers would be affected the most.

In most countries, including Austria, there is still time to prevent these proposals. But the clock is ticking.