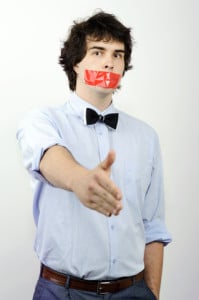 A “small group of angry white liberals” are attempting to ban Condoleezza Rice, the first African-American woman to be Secretary of State, from speaking at the University of Minnesota on April 17 – this, according to an article in the Daily Caller on March 29th. The group is led by a math teacher named William Messing and a graduate student named Nick Theis who is a member of the ill-named Students for a Democratic Society (SDS), with assistance from the University of Minnesota’s chapter of the SDS. Messing introduced a resolution in the school’s University Senate that calls on the administration to rescind the invitation. In an op-ed in the Minneapolis Star Tribune, Mr. Theis wrote that his objection had nothing to do with party politics or freedom of speech, but was “simply an issue of human rights.” Yeah! Right!

Unfortunately this attempt to muzzle conservatives is not unique to Minnesota. The faculty at Rutgers University has opposed Ms. Rice as this spring’s commencement speaker. She “lacks moral authority” and fails to meet the standards of “exemplary citizenship,” according to the faculty’s statement. The attempt to silence the Right is not unique to Ms. Rice. Neurosurgeon Dr. Benjamin Carson, who spent 30 years at Johns Hopkins Hospital and was emeritus fellow of the Yale Corporation, was banned from speaking at last year’s Hopkins’ graduation ceremony by an on-line petition from “liberal” students.

Black pastor Reverend Kevin Johnson of the Bright Hope Baptist Church in North Philadelphia was supposed to be the commencement speaker at his alma mater, Morehouse College. But when he wrote an op-ed criticizing President Obama for “failing the Black community” he was disinvited. Sandor Farkas is one of two students at Dartmouth (both registered Independents) who were banned from a campus activists’ strategy meeting as to how the college should honor Martin Luther King Day. Mr. Farkas’ comment: “What I am really frustrated at is that we can’t have reasonable discussions about these issues.”

These attempts to censor free speech at colleges and universities are in direct contradiction to the concept that centers of learning should be: marketplaces for ideas. Harvard senior and columnist for the Harvard Crimson Sandra Korn put it most bluntly: “If our university community opposes racism, sexism, and heterosexism, why should we put up with research that counters our goals?” Her article was titled, “Let’s give Up on Academic Freedom in Favor of Justice.” Besides pointing out the obvious, that she has already abandoned academic freedom, does Ms. Korn feel that all heterosexuals are homophobic? How would the biology department explain evolution without heterosexism?

The plot thickens. The IRS scandal is, in its essence, a blatant attempt by government to squelch free speech. That was also true of Mr. Obama’s demonization of Supreme Court Justices for their decision in Citizens United case. The Left wanted to ban corporate giving to political campaigns with no restraint on Union giving. There is too much money in politics, but every effort to control spending has failed. The best solution is to have the name of every donor be made public, regardless as to whether the gift is directed at the candidate, campaign or at a political action committee. 501(c)(4)’s should be disallowed. Sunshine and removing any tax advantage will do more to limit spending on campaigns than any government-proposed plan, as we all should know given the failure of McCain-Feingold. As openthebooks.com would say, open the books.

Free speech, as we all know, has limitations. It does not include the right to yell “Fire!” in a crowded theater; it does not include the right to be abusive, or to call out obscenities, to disturb others or to foment violence. The right to privacy and the protection of intellectual property are also rights protected by the Constitution. It is government – not the individual – that the Constitution confines, with a system of checks and balances. When President Obama says he wants to do things with or without Congress, he is speaks as government, not as an individual; thus should be subject to the restraints imposed on him by the Constitution. To let him do as he pleases sets a dangerous precedent.

In all that we do and say, we should never forget that liberty is sacrosanct and fragile. Listening last Sunday to four Ukrainians describe what was happening to their country, I was struck by the realization that young people like Mr. Theis and Ms. Korn and the students at Rutgers, Dartmouth and John Hopkins have more in common with the Russians than the Ukrainian protestors. The young gathered in Maidan Square wanted freedom, not socialism; independence, not paternalism; free speech, not ultimatums. In this country we take such rights for granted. However, in doing so, we forget how valuable they are, and what they cost in blood and fortune. We say we sympathize with those who struggle to be free, but we draw the line at taking up arms. But what happens when and if tyranny arises at home? To say it can’t happen is to ignore history and to misunderstand the nature of man.

We need more discourse, not less. It provides balance. Encouraging equality of outcomes is not the same as promoting equality of opportunity. The rights of the gay community should be protected, but those rights should not come at the destruction of the traditional family, which is happening, with almost half of first-born American children born out of wedlock. Narrowing gaps in income and wealth are worthy goals, but not at the expense of stifling aspiration, innovation and economic growth.

Conservatives place their confidence in individuals. Liberals argue that a benign government does a better job looking after those who most need help. But governments, as all revolutionaries know, are not always benign. Power corrupts. Conservatives see the expansion of government as inimical to the concept of freedom, including free speech. Liberals don’t.

What gives me confidence, however, that those who would stifle free speech will ultimately lose this war has been the proliferation of bloggers, talk radio, cable TV and those like the Koch brothers and their antitheses, George Soros and Tom Steyer. What these people ensure is that myriad voices will be heard. Speakers and writers may be reviled by those who don’t like the message, but that is no reason to not permit the messenger to speak – an act far more common to the intolerant Left than the more tolerant Right. I was pleased that the Supreme Court struck down the attempt to impose limits on campaign contributions in Wednesday’s decision, McCutcheon versus FEC. As I wrote earlier, it is sunshine, not mandates, that is needed. The man or woman who denies free speech is the one who fears an opponent’s words may successfully challenge their own, and serve to convert their followers.

In 1949, the FCC passed the Fairness Doctrine, requiring broadcasters to equitably air contrasting opinions. The next thirty years was a time when television news was limited to three broadcasters and a shrinking number of newspapers. There were no talk radio or all-day news stations. With news sources limited, the Fairness Doctrine was acceptable and enforceable. But those with opinions outside the mainstream had a difficult time expounding their ideas. In 1969, the Supreme Court ruled unanimously that not only was the Doctrine constitutional, but necessary to democracy. Finally, in 1987, with urging from President Reagan, the FCC abolished the Fairness Doctrine. Reagan proved wiser than the nine Justices. He recognized that news sources were mushrooming and that the word “fair” had different meanings to different people. He knew that people are better served with more sources of information, not one controlled by a federal bureaucracy. He knew news people had biases. Reagan’s beliefs were based on the concept that the individual is capable of making up his or her own mind, that they don’t want or need their news filtered. His was a faith in people, not institutions.

Unfortunately, extremists in the Democrat Party now occupy the mainstream. It is disturbing that those claiming to be liberal are vocally illiberal when it comes to dissenting opinions. It is especially so when we see it in our universities, supposedly bastions of classical liberalism. To the extent those university factories produce graduates who never hear a contrary opinion, our democracy will suffer. Fortunately they are countered by those who challenge conventional thinking. It is troubling, however, when the federal government utilizes the IRS to muzzle dissent, the CIA to cover up Benghazi, the FCC to attempt to place monitors in U.S. newsrooms, and the Justice Department to be disingenuous regarding Fast and Furious.

The tragedy in curbing dissenting opinions is that it causes the misconstruance and accentuation of differences. There is a difference in what conservatives and liberals see as the role of the U.S. to be in the world and in the size and reach of government at home. Nevertheless, in general, my progressive friends and I do not disagree as to long term goals, but rather how best to achieve them. We all would like to live freely, in a peaceful world, in which people can assemble, pray, write and speak as they choose. We yearn for a country that allows for the pursuit of happiness. We would all like the economy to grow, for jobs to be plentiful, for poverty to diminish and for an educational system that permits our children (and grandchildren) to become more competitive in the global economy. Where we differ is how best to achieve those goals, and how to achieve them without giving up liberties. Liberals believe government elites know best; conservatives put their trust in people. But, regardless on which side of the divide one stands, we should all agree: free markets in ideas are as valuable as free markets in economic matters.