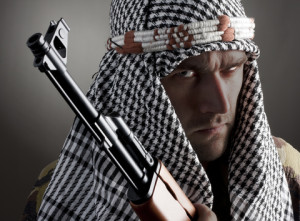 The only difference between acts of barbarianism shown by Islamic extremists today and those exhibited by German and Japanese soldiers seventy-five years ago is that today we see them in real time. What the Germans did to the Jews in the 1930s and 1940s was every bit as barbaric as what ISIS is doing to Jews, Muslims and Christians today. At Auschwitz, Buchenwald, Dachau, Treblinka, and at least 65 other concentration camps in Germany, Poland, Estonia, Latvia, Lithuania, Italy, France, Belgium, Netherlands, Croatia and Ukraine Germans cold-bloodedly murdered between six million and seven million Jews, Roma and the mentally and physically disabled. They gassed them, shot them and dashed the brains out of small children. In the French town of Oradur-sur-Glane, German soldiers locked all the women and children in a barn and then set it afire.

While the videos of the beheadings of American journalists James Foley and Steven Sotloff incense us (as they should), Japanese soldiers regularly decapitated prisoners. In February 1942, on the Indonesian Island of Ambon, Japanese soldiers randomly selected Dutch and Australian prisoners and executed them via beheadings and bayoneting. In December 1944, on Palawan Island in the Philippines, Japanese guards, wrongly assuming the Allies had arrived, drove their American prisoners into makeshift air raid shelters where they burned them alive. Examples of such cruelties are legion. But reading about such atrocities is not the same as watching them.

Yet today, 69 years after surrendering unconditionally, Japan and Germany are among our strongest allies, with free, democratic governments. From the ashes of that War, they have sprung, Phoenix-like, to become the third and fourth largest economies in the world. But, would that have happened if the United States had not militarily occupied their countries for decades, providing protection and defense, allowing them to concentrate on rebuilding? We still have 50,000 troops in Japan and 40,000 in Germany. Would those countries have achieved that success if the United States had not been instrumental in helping them design new constitutions and governments? Would that have happened had any country, other than the United States, been the conqueror? Has any other country in history been so generous to others with its purse and with the blood of its youth? Can any German or Japanese living today argue that the United States is not a force for good? While no one can hide from the horrors of World War II, no one can deny the success of the peace that followed.

War has always been personal for those who live in its midst, as those throughout much of Europe and on islands in the Pacific and Japan know full well during World War II, and as those throughout much of the Middle East, North Africa and Ukraine know today. For Americans it became personal on 9/11, but most of our fighting has been on others’ soil. Technology has changed the dynamics of war, not only in the lethality of weapons, but in the bringing of its horrors into our homes. As we sat entranced on our sofas and in our armchairs in the late 1960s and early 1970s, we watched on television American soldiers dying in the rice paddies and jungles of Vietnam. Social media today means we watch what is happening in the Middle East, including suicide bombers, improvised exploding devices and the decapitation of American journalists, in real time. If they had had today’s audio and visual communications 70 years ago, would the American people have put up with three and a half years of a war that caused the deaths of over 400,000 of its young sons and daughters – almost 400 people every day? I don’t know, but had we not persevered would Germany and Japan be the success they are? Would we be as free as we are?

Writing specifically about Ukraine, but with observations that apply to the Middle East, Professor John Mearsheimer of the University of Chicago argued in the most recent issue of “Foreign Affairs” that “realist” global politics require that the solution to the crisis in Ukraine be one that abandons any plan to westernize it. Instead he argues, we should “aim to make it a neutral buffer between NATO and Russia.” While that may be the sensible decision, it likely means giving up the citizens of that country to perpetual poverty, political oppression and military subjection. Should we walk away from those in the Middle East, effectively delivering them to the savages who would brutally rule over them? Geopolitics is a balancing act, but it is important we not cede those ideals and principles that have driven our nation since its founding. On the other hand, Professor Mearsheimer is correct of course when he writes that it would be “the height of folly to create a new NATO member that the other members have no intention of defending.”

The lessons of the past as they apply to the present are multifold. The President and Congress must clearly define the enemy we face and the consequences of doing nothing. As retired four-star General Barry McCaffrey has said, once we decide to enter a conflict, we must have public support with clear goals, and we must enter into war with overwhelming force to win. Victory brings its own challenges and we must not shy away from continued involvement. The history of the post-War world says that those countries in which our troops stayed – Germany, Japan and South Korea – have fared far better than those where our troops were pulled out prematurely – Lebanon, Vietnam, Iraq and Afghanistan.

My purpose is not to suggest that Americans are always in the right, or to make light of today’s Islamic savagery. My purpose is to suggest that no one has a monopoly on barbarity, that there will always be those who will try to destroy our way of life for the liberty it brings, but also that today’s enemies may become tomorrow’s allies. In 1943, if someone had suggested that we would be buying millions of Toyotas and Hondas from Japan and that the Japanese would be our most important ally in the Pacific two generations hence, that individual would have been dismissed as crazy. My purpose is also to argue that when we enter a conflict, it should be to win, and we should stay as long as is necessary. We must understand the consequences of leaving the fields of battle betimes. And, we should never be embarrassed by who we are and the freedoms we represent.

Those who condescendingly insist that the desire for freedom is a Western phenomenon ignore the success of Japan and South Korea. They also forget that Eastern Europeans, who had been kept under the yoke of Communist oppression for two generations, thrived when the Wall came down. It is not as though they were returning to a democratic state, which had been lost to the Nazis and then the Communists. They were descendants of a rigid class system, with a small number of aristocrats and a multitude of peasants. Yet they instinctively understood the benefits of a government that allowed them to keep the bulk of their labor and that protected the private property they were able to accumulate. Why mightn’t that be true in the Middle East?

It may be impossible to ever again fight the kind of war we did seventy years ago, when the Press was muzzled, either willingly or by decree, and atrocities committed by us and our enemies remained out of sight. We live in a far more open society. Will those who would destroy our way of life take advantage of that knowledge, and press their advantage? Will our leaders no longer seek absolute victory and instead allow relativism to replace moral principles? These are questions we must ponder.

A world without war is a worthy goal, but it is a dream, not a reality. Evil exists, and the greatest obligation of any country is to protect its citizens. “War,” as Clausewitz wrote, “is a mere continuation of politics by other means.” Nevertheless, going to war has to be the toughest decision any President or Congress makes, because it necessarily requires the ultimate sacrifice of many of its youth. It involves weighing two unknowns: What would the world look like if we did nothing? What will the world look like if we do something? Seeking answers to those questions is the job of leadership.

On September 1, 1945 President Truman spoke about the surrender of Japan. In acknowledging the immense loss of life and the terrible price paid by so many individuals, he said the purpose in destroying the evil of Nazism, Fascism and Japanese war lords was “to assure the survival of a civilized world.” Was the cost worth it? The subsequent decline in world poverty, the growth in global GDP and the proliferation in democracies suggest it was. Is not that the same goal in eradicating today’s evil, manifested by radical Islamic extremism? We are the only nation capable of
responding effectively. To do so is our obligation to mankind. To do nothing (or to simply “contain” and “manage” the problem) assures that Islamic terrorism will persist and spread. But, if in destroying that evil we can assure the continuation of a civilized world it will be a cost worth bearing, not just for ourselves but for all people, and for generations to come.