The EU’s Common Agricultural Policy (CAP), the farm subsidies which currently account for 39 percent of the EU budget (and accounted for almost 70 percent in the past), has been subject to much criticism over the years – and rightfully so. It is surely one of the most abominable government policies in the world, propping up farmers who would have gone out of business long ago, sending immense amounts of money to large farm corporations and rich landowners (which still includes the Queen), and hurting African farmers by the obvious overproduction, making them uncompetititve.

In the drama surrounding the CAP, one could almost forget about the second larger redistributive program of the EU (leaving the euro out of the picture for this article): the Cohesion Policy, or properly called, the European Structural and Investment Funds (ESIF), which accounts for close to another third of the budget. To let the European Commission explain itself what this fund is:

[This] Regional Policy targets all regions and cities in the European Union in order to support job creation, business competitiveness, economic growth, sustainable development, and improve citizens’ quality of life. In order to reach these goals and address the diverse development needs in all EU regions, € 351.8 billion – almost a third of the total EU budget – has been set aside for Cohesion Policy for 2014-2020.

The Cohesion Policy is the closest the EU gets to direct redistribution from some countries to others. Now, it may be true that all member states receive substantial amounts from this redistribution, as the following chart of the European Parliament Research Service shows: 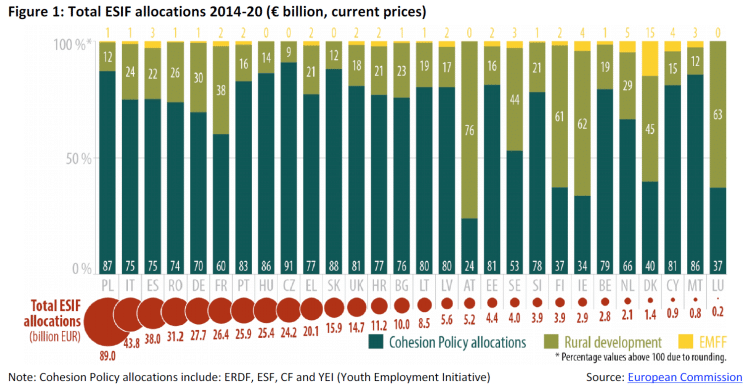 But when taking another step closer and only looking at the Cohesion Fund (CF), a sub-fund of the ESIF, the redistributional element becomes even more clear-cut. While in the ESIF at-large Germany and France, for instance, still rank number five and six (though this calculation doesn’t adjust to size of the economy or population, so both countries are much farther behind in reality), larger economies with a high GDP per capita are not even eligible for the CF, which has as its explicit goal to achieve the goal of “convergence,” meaning helping that poorer countries, predominantly in Eastern and Central Europe, catch up to the leading economies, predominantly in Western Europe. It is here where large quantities of money are sent from one side of the continent to the other, as this graph depicts: 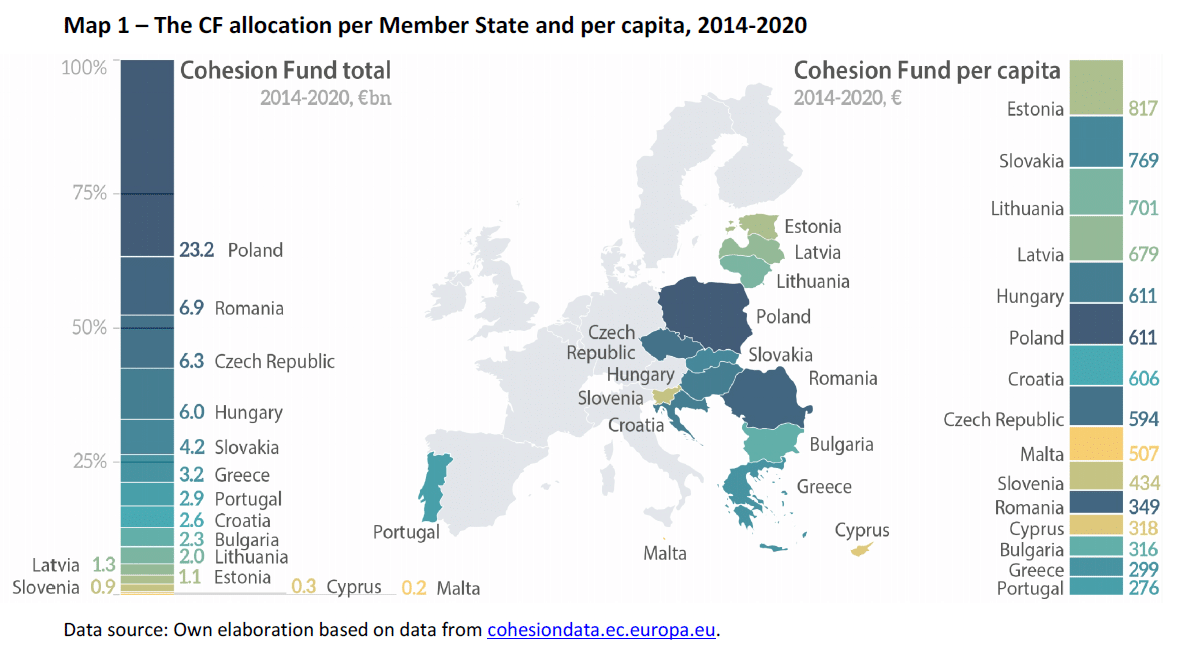 The results of these gigantic structural funds are spotty. A study on south Italy, a large recipient of funds (almost all of the 43.8 billion euros which Italy receive goes straight to the south), concluded that “the ability of these funds to offset the negative consequences of the economic crisis seems to have been limited.”

Overall, it seems as if the funds, especially the Cohesion Fund, do have a positive effect on economic performance, but the effect is quite small. Similar to the Marshall Plan, throwing vast amounts of money at poor regions will help – it would be shocking if it didn’t, but what in the end is necessary to actually be highly successful is good policy, i.e. little regulation, low taxes, and safe private property rights.

Meanwhile, studies have found that what is commonly called “social capital,” i.e. cooperation and trust among the population, might decrease thanks to the EU’s cohesion policy.

But the newest insights on the detrimental effects of the redistributive policies of the EU comes from the central bank of Italy. In a new working paper titled “On the unintended effects of public transfers: evidence from EU funding to Southern Italy,” three scholars of the Banca d’Italia look at the effects the Cohesion Policy has had on the south of Italy, and find that corruption has actually increased thanks to the fiscal transfers:

This should be of little surprise. A