How Italy Gambles Away Its Future

Italy is facing hard times. No matter where one looks, all newspapers are full of bad news. The settled argument between the government in Rome and the European Commission in Brussels, is not responsible in so far as it is not more than a symptom of far deeper problems. Not bright – that is how the International Monetary Fund (IMF), the European Commission, as well as the leading rating agencies classify Italy’s perspectives for the future. The low saving-rate is just one representation of this: 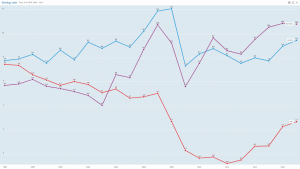 While either nearly all EU Member States have recovered or are still recovering from the last financial crisis, Italy’s economic development has been stagnating for ages now. Concerning the IMF’s current report, Italy’s real income is on the same level as twenty years ago. The average unemployment rate during this period stood at 10%, all the while (it was) a lot higher for young people under the age of 35.

This exactly represents one of Italy’s biggest problems: None of the nine – yes, nine – different governments of the past twenty years did something considerable in the field of structural reforms, especially not for the generation under 35. Conversely, one of the center points in the actual budget crisis between the EU and Rome is the planned reduction of the retirement age.

The idea of the “Quote 100” is simple: whose aggregate of age and work years reaches 100, can retire, discount free. That means, someone who has started working at twenty and then worked continuously for forty years can enjoy his retirement at the age of sixty. Thus, the current age of retirement for men can be undercut significantly.

This way, jobs for young people will be set free, at least that’s how the coalition of the populist Five Star Movement and the right-wing Northern League justify their plans. At the same time, the horrible costs on the pensions system are denied.

In an aging society, this is a very expensive election gift. Italy has yet, just as many other western European countries, to deal with an increasing demographic problem. Similarly to Germany and Austria, there is no longer a population pyramid in Italy either. In the years to come, there will be even more old people who gain pensions and less and less young people who pay for this: 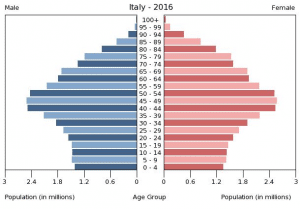 Italy urgently needs some real structural reforms which enable an easier access to the labour market, as well as more tax and generation fairness in order to reach stability. The induced uncertainty brought by the inexperienced government unfortunately leads to the contrary.

The overall expensive election gifts to the people over fifty did not just strain younger people and thereby destroy the important cohesion between the generations, but also replace other, more important investments and the possibilities to regain competitiveness. The pension spending is thereby increasing: 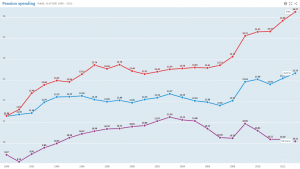 Furthermore, the bad ratings with partly bad future outlooks by rating agencies threat the financial possibilities of Italy. Higher interest rates, and thereby increasing spendings are the consequence. This way, a vicious circle is set, at which end there is (till now) no “lost generation,” but the path towards such an outcome is probable. The government in Rome should think about whether it wants to gamble away the countries’ future in such an easy way – although the government’s populist parties could gain profit by an ongoing deterioration of the country.

Thus, the foundation towards relegation by exploitation of a whole generation, decomposition of infrastructure, degeneration of education institutions and the welfare system is set.