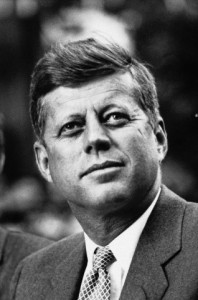 The most commonly asked question today: Where were you on this date in 1963? Of course, a shrinking number of Americans can respond. The median aged American today was not born until twelve years after President John F. Kennedy was shot. I was in a college classroom, daydreaming as usual, when I noticed the flag outside lowered to half-mast. A little more than a year earlier I had been at Fort Dix during the Cuban missile crisis. We were ordered to stand in formation, duffle bags ready, until ordered to stand down a few hours later. The President’s handling of the crisis showed a toughness and maturity, in contrast to the disastrous Bay of Pigs operation, which occurred three months after he took office. Even I, at age 22, knew Kennedy was growing into his role as Commander in Chief.

Judging Mr. Kennedy as a President has always been difficult, as he was only in office for a thousand days. Any answer is speculative. While JFK’s time in office was short, six Presidents, including Gerald Ford, spent less time in office than he did, with much less written or said about them. He was a supply-sider, in that he lowered the top tax rate from 90% to 65%, and noted the increase in revenue such cuts brought to the Treasury. Like everyone at the time, he was a Cold War warrior. He combined youthful self-assurance with political pragmatism. In his inaugural, he said: “we shall pay any price, bear any burden…in order to assure the survival and the success of liberty.” Because of concerns regarding nuclear weapons, he pledged to renew efforts at peace, but added a caveat: “…only when our arms are sufficient beyond doubt can we be certain beyond doubt that they will never be employed.” In the same speech, he reminded Americans of the limits of government, that “…the rights of man come not from the generosity of the state, but from the hand of God.” And he uttered the phrase most remembered, but often misquoted: “My fellow citizens of the world: ask not what America will do for you, but what together we can do for the freedom of man.”

But it was his youth – “that the torch has been passed to a new generation of Americans” – for which he will always be remembered. At age of 43, John F. Kennedy was the youngest man to be elected President. (The youngest to become President was Theodore Roosevelt, who was 42 when William McKinley was assassinated in 1901.) He was the first President born in the 20th Century. He did represent a new generation. The previous five Presidents – Eisenhower, Truman, FDR, Hoover and Coolidge – had been born within eighteen years of one another between 1872 and 1890. His immediate predecessor, General Eisenhower had been Supreme Commander Allied Expeditionary Forces during World War II. Kennedy had served in the War as commander of a PT boat – a young, heroic junior naval officer. He did indeed represent a new generation.

Kennedy was the eighth President to die in office and the fourth to be assassinated. Three Presidents had been assassinated in a 36-year period, between 1865 and 1901 – Lincoln, James Garfield and William McKinley. Since Kennedy’s death, Presidential security has become far more intense, with Presidents living virtually in bubbles, no longer exposed to the masses. The idea of a President strolling along Pennsylvania Avenue, or an ex-President driving himself and his wife on a motor vacation – as Truman did in June 1953 – seems as remote as the building of the Pyramids.

While Garfield and McKinley have disappeared into the mists of history, the memories of Lincoln and Kennedy have survived. Lincoln’s greatness is understandable because of the Civil War, the freeing of slaves and for holding the Union together. Kennedy’s memory has been maintained in large part because of the myths that emerged in the months and years following his assassination in Dallas on this date fifty years ago. His Administration had included many of the “best and the brightest,” as David Halberstam immortalized them in his book of that title. Young academics from Harvard and other Ivy League colleges descended on Washington, joining other intellectuals – all young, athletic, wholesome and aspirant. Their ranks, according to Robert Dallek’s Camelot Court, included 16 Phi Beta Kappas and 4 Rhode Scholars. The ironic twist to the title of Halberstam’s book is, of course, that it was those same, bright young men that got the United States enmeshed in Vietnam.

Since the War-time death of his older brother, Jack Kennedy had been groomed to become President. He was the scion of a rich and powerful father. He grew up privileged in a large, wealthy, active and charismatic family. (Thirty years earlier, his father Joseph Kennedy had been a bootlegger and Wall Street speculator. The elder Mr. Kennedy had then been appointed the first chairman of the S.E.C. – a fox to look over the henhouse was the explanation given by FDR. Later, he served as Ambassador to the Court of St. James, before leaving the post in 1940 for being too anti-British. By 1960 he was the patriarch of America’s version of a royal family.) In 1953, Jack Kennedy married socialite Jacqueline Bouvier. It was a wedding that made the cover of Life Magazine. In 1946, he had been elected to the House of Representatives and six years later to the U.S. Senate. In defeating Richard Nixon in 1960, Kennedy became the first (and only) Catholic to be elected President of the United States.

The early 1960s marked a sharp change from the relative placidity and optimism of the middle and late 1950s – a welcome time after a decade of Depression and seven years of war, including Korea. By the end of the 1960s all innocence was gone – evaporated in the miasma of Vietnam and student unrest. Robert Kennedy and Martin Luther King lay dead, killed by assassins in 1968. Did JFK’s death provide a foreboding of what was to come? Would the war in Vietnam have expanded had Kennedy lived? In 1962 Kennedy increased the number of advisors in Vietnam from a few hundred to a few thousand. A U.S. backed coup by Vietnamese generals assassinated Premier Diem and his brother a few weeks before President Kennedy was assassinated. Would the SDS and other counter-cultural movements like the Black Panthers and the Symbionese Liberation Army have become as wide-spread? Would colleges from Columbia to Berkley have had to suspend classes? Would Woodstock have happened, with all it represented in terms of drugs and sexual license? Would the police have had to storm protesters, as they did in Chicago in 1968 at the Democrat convention? We can only speculate, but I would suggest such movements and demonstrations are far greater than any one man – that the ingredients were there. Their unruliness and disruptions became the misfortunes of future Presidents.

The Peace Corps, established in 1961, was an enormous success and remains a lasting legacy of JFK’s Presidency. However, the big social legislation of the 1960s – the Civil Rights Act, Medicare and Medicaid, and the war on poverty – became bills signed into law by Lyndon Johnson in 1965. But, when the counter-cultural movement was at its most outrageous, a vestige of Kennedy’s optimistic idealism was realized when Neil Armstrong took man’s first steps on the moon, on July 20th, 1969.

Despite being a country that revolted against the royal edicts of George III, many Americans are enamored with royalty. Frankly, it is a habit I don’t understand. Yet, it was in the mythical blanket of Camelot that Kennedy followers chose to wrap their fallen hero. It turns out that the first to use the term “Camelot” regarding JFK’s Administration was Jackie Kennedy. She contacted Theodore White, a writer with Life Magazine and the author of The Making of the President 1960, shortly after the assassination. Jackie wanted to be sure that the first piece to be written about her husband would be exactly what she wanted it to be. The musical “Camelot” had opened in 1960. According to Mrs. Kennedy, the song her husband most enjoyed contained the line, “Don’t let it be forgot, that once there was a spot, for one brief shining moment that was known as Camelot.” Whether or not that story is apocryphal, she succeeded in mythicizing his Presidency. This past week, JFK’s daughter Caroline was received in Japan, as our new ambassadress, like a princess. The more unattractive qualities of Kennedy’s character, such as frequent trysts with women were largely covered up. We were left with an image of sparkling, charismatic youth, who died with dreams unfulfilled, a man and a Presidency that would remain forever young. One cannot help but recall lines from A.E Housman’s, “To An Athlete Dying Young.”

Smart lad, to slip betimes away

From fields where glory does not stay,

And early though the laurel grows

It withers quicker than the rose.

The future will look at Kennedy’s Presidency through analytical rather than rosy lenses. He did represent a break with the past, a break that was without pain at the time of his death, but a break that devolved into chaos a few years lat