Kiev Calls Belgrade: The Lyceum and the Academy Review Kasbah’s Fall while Searching for Collateral Assets 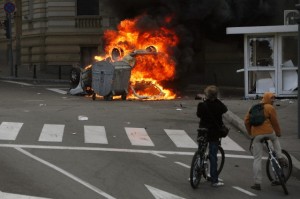 More than twenty years ago, the late Samuel Huntington coined the phrase “Democracy’s Third Wave”. By that Huntington described the three phases/waves of democratic revolution that the world has experienced, starting with the Jacksonian democracy in the US in the 19th century (a wave that was suspended during the fascists’ rise in Europe), to be followed by the Allied victory after the WWII (again to be suspended between mid 1960s to mid 1970s), which in turn gave its place to the current wave that started with the Carnation Revolution in Portugal in 1974, the democratic reforms in Latin America in the 1980s, and culminated with the collapse of the Soviet Union in the early 1990s. The “Arab Spring” and the recent events in Ukraine may fall into that third wave. However, it seems that for the Kasbah to fall (fortress which the old regimes occupied in order to fight any uprisings) and the change to prevail, any domestic revolution also needs to go through three phases, namely: the overthrow of the old regime, the chaotic environment that follows when instability is the main characteristic, and finally the establishment of democratic institutions by which the nation can be governed.

We live in a world marked by flux. In this environment of change, we are searching for solutions that will address both short and long term problems. In the short term we are facing collateral holes in the financial world, which were generated by toxic paper/bonds/IOUs that still threaten financial stability. In the medium and long term we are facing unfunded liabilities that range from national debts to promised pensions, healthcare obligations, and other inelastic expenditures. In this geoeconomic environment of financial instability, the world needs to change. Maybe some borders need to change too, as history has taught us. The ground where geopolitical and geoeconomic changes meet and interact is the ground where Plato’s Academy meets Aristotle’s Lyceum.

The former was the School that is teaching the governments, the institutions, and the public to find a path from the dark cave that leads to the liberating truth of “everlasting, immortal, and changeless” reality. Aristotle (the most famous of Plato’s students) disagreed with his teacher. He was not interested in a mundane reality. Aristotle’s interest was to find our place in the present constantly changing facts. Plato gave us the ideal, Aristotle the realism. Plato gave us the Reformation, Aristotle gave us economics. Plato gave us the Renaissance, Aristotle taught us how to get out of the Dark Ages. As Arthur Herman put it in his latest book “The Cave and the Light”, “One gave us the U.S. constitution, the Manhattan Project, and shopping malls. The other gave us Chartres Cathedral, but also the gulag and the Holocaust. Aristotle asks: ‘How do you fit into the world that already exists?’ Plato asks: “Why does the world exist at all?’”

Let’s welcome ourselves then into the ground/theater where idealism meets realism. In that theater, assets like pipelines (see picture below) crossing Ukraine are vehicles whose collateralization can change today’s and tomorrow’s economic and financial reality, while also lowering costs and increasing productive capacities.

The Yugoslavian (with Belgrade serving as the old capital) experience of the early 1990s may not be avoided in the Ukrainian theater. The idealism of Plato may take the form of numbers’ realism, like it did in his work by the title “Timaneus”, where the main character Timaneus reveals that the ideal Forms (the model of perfection out of which God has fashioned the visible world) are actually numbers, which according to Pythagoras (also revealed in that same work) represent the secret language of nature.

What is that numbers’ reality then and what does it mean for us as we view the investment horizon? Let me briefly state fours facts:

First, the geopolitics and the geoeconomics of the USIs (Ukraine, Syria, Iran) will have an influence on the efforts of buying time in order to heal the financial holes. A failure or significant miscalculation might have dramatic consequences if in the calculus of geo-strategy hot heads prevail.

Second, the Chinese as well as the Russian economies are not in the best shape, and a Damocles sword hangs over those economies. When internal economic weaknesses are handled with nationalistic eyeglasses, a lethal cocktail may be produced that may seek the deus ex machina solution.

Third, the numbers projected for the US economy seem to justify what we wrote as a more than 3.2% expected growth rate in 2014, especially when we take into account the rising lending and the increasing credit facilities. The selective data released out of Europe, also portray cautious optimism (of course things could be turned upside down there if in the EU elections this May Euroskeptics prevail). However, and based on current projections, we remain optimistic for the markets this year.

Fourth, natgas seem unsustainable at this level. Shorting it (by watching that short carefully) might not be a bad idea.

The views expressed on AustrianCenter.com are not necessarily those of the Austrian Economics Center.
hayek_admin2014-02-24T09:46:06+01:00