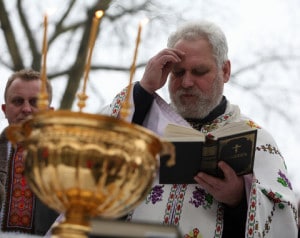 Christians are generally considered the “haves,” the establishment, the status quo, the perpetrator rather than the victim. But that is not a valid portrait. In varying degrees of intensity and by myriad peoples, Christians have been singled out for killing for 2000 years. Since 9/11, attacks on Christians have intensified (mostly by Islamic extremists). The politically correct environment in which we live has meant that many of these attacks receive minimal publicity. While attacks on Muslims are categorized as “hate” crimes, when Christians are attacked it is the victim who is often seen as the instigator. However, Pope Benedict XVI, who resigned in 2013, recently claimed that Christians are the most persecuted group in the contemporary world. The murder of Christians has only increased since his warning.

While it can be argued that Christianity has been a force for good, there have been instances, though, when harm has been done in the name of Christ. Early examples were the Crusades (1095 – 1291), where, with promises of Plenary Indulgences from Pope Urban II, knights and kings from across Europe traveled to the Middle East to restore Christian access to holy places in and around Jerusalem. (By the 11th Century Islam had been embedded in much of the Middle East for 400 years.) It was more likely that the knights and kings who led those armies were motivated more by the prospect of gold and jewels, than by the possibility of doing time in Purgatory. The latter was reserved for the hapless minions who were forced to accompany them. Greed has always been more primeval than religiosity. In any case, Crusaders were not particularly Christian to those who opposed them. Rape and pillage were all in a day’s work.

Another early and blatant example of Christian persecution was the Spanish Inquisition. Like the Crusades, the targets were Muslims; though Jews were victimized as well. In 1478, Ferdinand II of Aragon and Isabella I of Castile established the Tribunal of the Holy Office of the Inquisition to replace the Medieval Inquisition which was under Papal control. More than seven hundred years earlier, in 711, Moors had invaded the Iberian Peninsula, conquering and ruling over most of what is today Spain and Portugal. While they were stopped from invading the rest of Europe by Charles Martel around 732, Muslim rule in Spain only ended with the fall of Granada in 1492. The Inquisition was established to ensure the orthodoxy of those who converted from Judaism and Islam to Christianity. The brutality of the Inquisition could be seen in the fact that after 1492 if one did not convert one was forced into exile. Thousands were put to death. It was only in 1834 that Isabella II abolished the tribunals, though by then they had not been used for several years.

It is also true that Hitler and Stalin were Christian by heritage, if not by belief, and Jews were singled out as victims. Germans may not have sent Jews to gas chambers in the name of Christ, but there is no question that the Holocaust was about ethnicity and racial purity.

Despite its shortcomings, religion plays a major role in the lives of billions of people. It provides comfort to the bereaved, the discomfited and helps those suffering indiscriminate and wanton acts of evil. Nevertheless, there is no question that, while religion has done more good than harm over the millennia, it does have a dark side. Throughout history, religion, along with geography, natural resources and economics, has been one of the major causes of war and suffering.

We, in the comfort of our Western homes, often forget that it is the dispossessed and those without hope that are most likely to seek solace in religion. Prosperity foretells a rise in secularism and a decline in religiosity. Prosperity brings all kinds of material goods – food is plentiful, shelter is available, entertainment in the form of internet-connected cell phones are ubiquitous – but often that secular fulfillment is accompanied by a want in spirituality. It is why, despite the magnificence of their cathedrals, Europe’s pews are increasingly empty on Sundays. Gallup reports that 15% of French citizens and 10% of UK citizens regularly attend church. While Muslims make up only 5% of the UK population, estimates are that more people will be attending mosques in 2020 than churches. And, 25% of mosques have extremist literature that calls for the beheading of lapsed Muslims, forbidding interfaith marriages and ordering women to remain indoors. Do we really want to integrate Sharia Law with Blackstone?

In the United States, similar trends regarding church attendance are apparent, with less than 20% of people attending on a regular basis. The numbers are higher for older people and much lower for younger. Apparently, the concept of being “connected” does not apply to the Deity. Christianity has been strongest among emerging nations, in Africa and parts of Asia. Ironically, it is in those nations where leisure is a luxury that people find time for God. It is also in many of these nations where Christians are most persecuted.

According to a PEW Research poll, 80% of the world’s population identifies with a religious group. Of those, 2.2 billion identified as being Christian, 1.6 billion Muslim and 1 billion Hindu. While Muslim nations proudly call themselves just that, Christian nations are either consumed with doubt, or too politically correct to acknowledge what they are. A few days ago, when David Cameron claimed Britain to be a Christian nation – a supposition one would think obvious with the head of the Church of England being the Queen – he was accused of “fostering division.” His characterization, according to his accusers, will have “negative consequences for politics and society.” Of course Mr. Cameron is correct. It is only the PC police (today’s version of George Orwell’s fictional “Thought Police”) that would argue it is not. Seventy-seven percent of Americans identify as being Christian. Even though the U.S. has no state religion, it is, in fact, a Christian nation.

The problem for Christians is that oppressive governments in many emerging countries battle for people’s minds and souls. They fear the competition Christianity brings. It is why Kim Jong-un’s North Korea ranks first among Open Door’s list of countries in terms of Christian persecution, and why Assad’s Syria ranks third. Of the estimated 300,000 Christians in North Korea, an estimated 50,000 to 70,000 live in concentration camps or prisons. Being caught with a Bible is grounds for execution. Last year 2,123 Christians were killed – mostly in Muslim nations – because of their faith. That was almost a doubling from the 1,201 killed in 2012. The data is according to Open Doors, a nondenominational group that tracks Christian persecution worldwide. Of those murdered in 2013, 1,213 were killed in Syria, 612 in Nigeria and 88 in Pakistan. In Somalia, which ranks second on Open Door’s list, converts to Christianity from Islam are threatened with execution. Rounding out the top ten on Open Door’s list are Iraq, Afghanistan, Saudi Arabia, Maldives, Pakistan, Iran and Yemen – with the exception of North Korea, all Muslim nations. For obvious reasons, the Christian population in these countries has shrunk.

Since the start of this year, 479 Christians have been killed for reasons of religion, 421 of them in Nigeria. In February, in the village of Izghe, 121 townspeople were rounded up and summarily hacked to death by Boko Haram (an Islamic terrorist group), while they shouted praises to Allah.

Apart from the three people killed at last year’s Boston Marathon by Muslim brothers, four Christians in the United States were killed in 2013 for being Christian, in three separate incidents. They were all killed by Islamic extremists. Two Muslim converts, each on a “mission from Allah,” shot Christians, one in California, the other in Ohio. A third Muslim beheaded two Christian Coptics in Buena Vista, New Jersey. The latter, “a ritual killing, religious in nature” is the way authorities put it. Freedom House, a U.S. human rights organization, claims that mosques across the country (and there are 3000 of them) carry literature describing non-Muslims as infidels and promoting intolerance against Western society. Regardless, crimes committed by Muslims against Christians and Jews are rarely deemed to be of the “hate” variety.

The murdering of Christians and Jews has reached epidemic proportions, much of which – in this age where moral relativism prevents offending the very people responsible for much of the killing – has gone unreported, or underreported. Wishing something away does not make it disappear. Mr. Obama seems to feel the War on Terror is over, with Osama bin Laden dead and al Qaeda on the run. Secretary of State John Kerry has suggested that the emergence of the 21st Century has mystically meant that civility will be the way of relations between nations. Islamic extremists have little interest in living in harmony with those of other faiths. President Bush was far closer to the mark when he spoke of the war against terror being one that will persist for generations. There will be no Battleship Missouri, aboard which the enemy will surrender and give up their weapons. There will be no treaty signed in the mirrored halls of Versailles. It will at some point peter out, but only when officials acknowledge what is happening and confront force with force.

While no single episode has had the drama of 9/11, Islamic terrorism, if anything, has become more embedded in our lives, certainly as regards the discriminate killing of Christians and Jews. Atomic weapons in the hands of nations, such as North Korea today, Iran likely tomorrow, and Pakistan, no longer the ally it was, means that the world is increasingly unsafe.

I have no interest in whitewashing the role Christianity played in past episodes of ethnic violence. Nevertheless, that does not excuse the increase in the killings of Christians today. Ignoring reality is