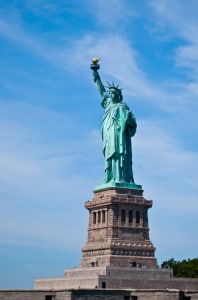 The statue of Liberty in USA. Image by © Dreamstime

The good news is that there was a significant increase in economic freedom between 1980 and 2010. Some great graphs to feast on

I am in Vancouver, Canada, for the biennial meeting of the World Taxpayers Associations. I gave a speech on why tax competition is a valuable force to constrain the greed of the political class, but warned the audience that high-tax governments and international bureaucracies are using financial protectionism to coerce low-tax jurisdictions into weakening their good policies.

But regular readers know that I pontificate far too often on that topic, so today’s column is instead about a presentation by Michael Walker, who was the founding Executive Director at Canada’s Fraser Institute.

Michael’s great contribution to the world was the creation of the Economic Freedom of the World Index, which he developed working with scholars such as Milton Friedman.

I’ve cited the EFW Index many times, particularly to bemoan how America’s score has deteriorated during the Bush-Obama years.

Continue to the full article……

The views expressed on AustrianCenter.com are not necessarily those of the Austrian Economics Center.
hayek_admin2019-01-14T06:17:24+01:00