Landesbanken – the Monster is still alive 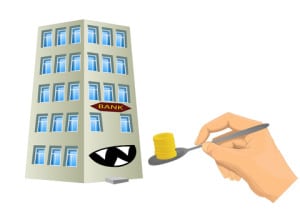 Despite the well known scandals and huges losses for the taxpayer caused by German Landesbanken the Länder governments are still engaged in banking. But the German Landesbanken are not in great health, or great spirits. The majority of them had to be rescued or supported by the German Länder and the federal government with varying contributions from their savings bank customers and shareholders. The West LB has been either sold or wound down, while the sins of the past — losses on Greek sovereign bonds, toxic debt and overseas businesses — continue to threaten the federal state of NRW and the related savings banks.A double-digit return on average equity is very rare. Usually Landesbanken, e.g. those of Bavaria and Baden-Württemberg reached returns about 1 %. Both giants are trying to cut costs. E. g. the Bayern LB faces extremely high pension costs associated with German civil servants.

Years ago the EU commission stripped the Landesbanken of their state guarantees and thus access to artificially cheap triple-A funding against the fierce resistance of the federal and Länder governments. Downgrades from the rating agencies have followed, although a very strong state guarantee effectively remains in place. Furthermore the commission proposed the Landesbanken to shrink and restructure or to shut their business. But the Länder governments refused to close down their Landesbanken.

Profitability is still a key issue. Profits look anemic, whichever measure one takes, and losses are not uncommon, even though the German economy is stable. Funding could be difficult without the presence of the German state. The high loan-to-deposit ratios reflect the fact that very few Landesbanken have direct access to retail customers and are therefore dependent upon wholesale funding. Capital is rising while net income is falling, thereby depressing returns. Revenues are now under pressure in the highly cyclical and currently depressed ship financing business. E.g. HSH Nordbank, which has been rescued by the state governments of Hamburg and Schleswig-Holstein with 13 Billion euro, now could face losses of 9 Billion euro resulting from ship loans.

The key question is: Why should the German regional states own a bank? It has cost and still costs the German taxpayer a great deal of money to invest in boats, planes and property, yet brings the taxpayer few advantages for the risks incurred. Given the strength of our economy, this poor performance still looks very strange. The critical issue is the risks undertaken by the Landesbanken and their pricing. Today, the landesbanken effect has been a sharply reduced 20 % of German corporate lending. Their managements have collected an array of bad loans and exposures seeking higher growth elsewhere. Backed by a now abolished state funding guarantee, they vied with each other to collect trophy assets in high risk markets. Portfolios of toxic debt, troubled subsidiaries in Hungary and Austria, questionable property, shipping and private equity portfolios were acquired and became loss-makers. There did not seem to be an investment error available, which at least one Landesbank did not make. The massive impaired portfolio of HSH Nordbank is a tribute to these skills.

In fact there is no business model for the Landesbanken. The politicians liked to have them finance their own projects. Since interest rates are now so low, this is not necessary. The only projects available are deeply questionable and high risk. There is no need or role for state-sponsored Landesbanken at all. All their activities could either be privatized, or closed or taken on by the local savings or cooperative banks.The capital markets operations should be privatized.The corporate lending business is not needed and should be closed down. Industrial policy should not be undertaken or financed by a state-supported Landesbank.Areas such as project finance and state-sponsored tasks such as housing or energy finance could be assigned to the KfW Bank. This would leave a bad bank in which the old assets would have to be run off.

The clearing and settlement functions of the Landesbanken are practically the only systemically important elements of the Landesbanken’ business. One might have one such unit in North Germany and another in South Germany to meet the requirements of the savings and cooperative banks. Otherwise, effectively, all the Landesbanken could be wound down and run off. This would reduce the risk to taxpayers inherent in a banking system where bankers have been incentivized to take risks best undertaken by private institutions.

The views expressed on AustrianCenter.com are not necessarily those of the Austrian Economics Center.
hayek_admin2014-04-25T10:11:16+02:00