The European Resource Bank Meeting is the largest annual congress of free market think-tanks in Europe (7-9 June in Vienna). 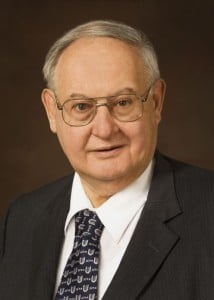 “He is a great and unique promoter of independent think-tanks and a  distinguished senior scholar at the Institute for Humane Studies. Leonard  Liggio is one of our special guests at this year’s European Resource Bank  conference in Vienna. And I am honored and proud to award Professor Liggio with the Lifetime Achievement Award of the European Resource Bank, especially for his contributions to the free market movement,” says Dr.  Barbara Kolm, the Director of the Austrian Economics Center.  Liggio will be  awarded this prestigious award nearly one month before his 80th birthday on  July 5th.

Professor Leonard Liggio is Executive Director of The  Templetion Foundation and the Atlas Economic Research Foundation. Leonard’s interest in liberty began before World War II.  He grew up listening  to commentaries from both sides of the political spectrum on the radio. His  parents were also divided as his father supported Franklin D. Roosevelt and his mother was opposed. He followed debates and in college was a supporter of Senator  Robert A. Taft and his campaign for the presidency.  From then on, Leonard,  acquainted himself with the Foundation for Economic Education (FEE), which is  the oldest free-market organization in the United States, and began receiving their pamphlets. On breaks from Georgetown University, he would sit in on Mises’ seminars, where he began meeting more liberty oriented people. After college Liggio  went on to write many famous articles, including “The Heritage of the  Spanish Scholastics”, “Christianity, Classical Liberalism are Liberty’s  Foundations”, and “Freedom and Virtue.”  He was also a member of the editorial board of Cato Journal, of the American Journal of Jurisprudence  at Notre Dame Law School, and of Markets & Morality.  He was the editor of the journal Literature of Liberty: A Review of Contemporary Liberal Thought from 1978  to 1982 and created Left and Right: “A Journal of Libertarian Thought” with Murry Rothbard and George Resch in 1965.

“The publication emphasized common philosophical  bonds unifying the anarchism and isolationism of the Old Right, and the  instinctive pacifistic anarchism characterizing the New Left in the  middle sixties,” Director Kolm continues. Liggio is a professor of history and law at George  Mason University in Fairfax, Virginia. He is also a visiting professor of law at Fanciso Marroquin University in Guatemala City, the Academia Istropolitana in Bratislava, the Institute for Political and  Economic Studies at Georgetown University, and the University of  Aix-en-Provence in France.

The Lifetime Achievement Award of the European Resource Bank will be handed over by Dr. Barbara Kolm, Director of the Austrian  Economics Center and by Pierre Garello, President of the Institute for Economic Studies Europa, France.

José Piñera of the International Center for Pension  Reform in Chile, former Minister of Labour and Social Security of Chile and Distinguished Senior Fellow of the Cato Institute, is the key note  speaker at the Gala Dinner in honor of Professor Leonard Liggio.

The views expressed on AustrianCenter.com are not necessarily those of the Austrian Economics Center.
hayek_admin2019-01-14T06:46:08+01:00