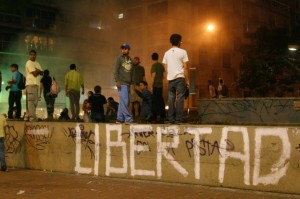 Three people died in riots in Caracas last Thursday. Venezuelan President Nicolás Maduro predictably blamed the deaths on “neofascists financed by the United States.” Nothing was said about empty shelves in stores, food shortages, or an inability to buy a car, gasoline or toilet paper. The accusation was apparently made without irony and absent any appreciation for the fact that Maduro’s (and Hugo Chavez’s) political party, the United Socialist Party, exhibits many of the characteristics of “old-fashioned fascism,” including the National Socialist Party of 1930s Germany. While Maduro doesn’t have Hitler’s “brown shirts” (or at least not visibly) and, apart from Americans, has not yet singled out a particular group for blame, the economic consequence of his policies have been to deprive the people of the basic necessities of life.

It is unsurprising that a man who surrounds himself with Communist allies like Cuba, China and Russia, as does Senor Maduro, should invoke Fascism as evil, while inferring that Communism is good. In truth, they are not at polar ends of a linear political spectrum. The spectrum is circular, not horizontal, with the two political beliefs intersecting on the side directly opposite democracy.

Communists are more subtle than Fascists, in that they use words like “reform” and they claim to address inequality; thus are more widely accepted in the West. Yet, both communists and fascist are murderously indiscriminate toward those considered enemies. The number of civilians killed by Stalin is estimated to be north of 20 million, probably more than were killed by Hitler. Both men suspended the rule of law and they eliminated dissenters. Both thrived on hatred and divided their people, isolating a segment of their citizens on whom to pin blame. For Hitler, it was Jews; for Lenin and Stalin, it was the aristocracy; for Castro, it was plantation owners. In Venezuela, an informal militia roams cities and towns on motorcycles intimidating political opponents. They may not wear brown shirts, but they derive from comparable ideologies.

The consequence of Venezuela’s Socialism has been a decline in economic well-being. In the fourteen years that Hugo Chavez ruled, the Venezuelan bolivar shrank 87% against a weak U.S. Dollar. (During those years, the U.S. dollar declined about 20% versus a basket of currencies.) In the ten months that Nicolás Maduro has been president, prices have risen 56.3%. And that includes a few weeks of forced price cuts ahead of local elections last November. The discrepancy between official exchange rates and black market rates has widened. A U.S. dollar costs 70 bolivars on the black market, while the official rate is 6.3. The experience in Venezuela provides a lesson in the consequences of unrestricted state intervention. Mary Anastasia O’Grady wrote last December about Venezuela in the Wall Street Journal: “Heavy state intervention was supposed to produce justice for the poor in the breadbasket of South America… [Venezuela] is an instruction manual on how to increase human misery.” The bottom line is that the Country has produced riches for the governing classes, poverty for the middle classes and even greater poverty for the already poor.

Venezuela’s collapse did not come about because of an absence of natural resources, but in spite of them. By most counts, Venezuela has the largest proven oil reserves in the world. Forty years ago they had the highest standard of living in Latin America and the 4th highest GDP per capita in the world. Today, the country is virtually bankrupt. A professor from John Hopkins recently put the implied rate of inflation for 2013 at 297%. In terms of property rights, the Heritage Foundation gives Venezuela a five on a scale of one to a hundred, and ranks the country 175th – between Eritrea and Zimbabwe – on a basis of economic freedom. Last week, Toyota and General Motors announced they were shuttering plants, putting 12,000 people out of work. Air Canada, American Airlines and United Airlines, among others, have suspended operations in the Country. The Heritage Foundation’s report said about Venezuela: “After more than 14 years of ‘21st-century socialism,’ economic and political freedom is nonexistent.” In my opinion, Venezuela’s United Socials Party is proof of Adam Smith’s somewhat cryptic remark, “…that there is a great deal of ruin in a nation.” In Venezuela that ‘ruin’ has been unmasked.

The message from Venezuela is the speed and the perfidious nature with which nations can go to ruin. Hugo Chavez, a “champion of the poor,” campaigned on a platform of redistribution to combat inequality. However, under his leadership inflation rose, the nation’s living standards declined, and poverty increased. Chavez muffled dissension, abandoned civil rights and the rule of law. In doing so, he destroyed his nation’s culture while generating a personal net worth of about $1 billion.

A nation’s culture reflects all aspects of its being. It should not be forced. It changes naturally, almost imperceptibly, over many years. The culture of the United States is one of individual personal responsibility and self-reliance. It is manifested in our concept of limited government and in our individual rights embedded in the Constitution’s Bill of Rights. It can be seen in our religious freedom, in our schools, in the belief that every person should have an equal opportunity to succeed and that no one is above the law, that legal contracts be honored and that property rights are inviolable. We are a nation of immigrants who have come to this country largely to improve our lives and to live freely, not to substitute one paternalistic dictator for another. Our culture is a compaction of our predecessors and their ideas. It is us. The destruction of a nation’s culture destroys that nation.

We are a caring and generous people, who give more to charity than any other. But, insidiously and almost invisibly, our government has been assuming responsibilities men and women harbored for decades, so that participation in community service organizations has declined for years, a development well described by Robert Putnam, in his 2000 classic, “Bowling Alone.” The stated intent of those who would expand the reach of government is benevolence and equality, to make life easier for those who are the most unfortunate. The effect has been greater dependency and less community involvement, along with reduced economic growth and declining middle class incomes.

In his State of the Union, President Obama was not bashful about governing unilaterally, when he felt the need. Executive orders and administrative rules are permitted under our Constitution, but they are not supposed to substitute for legislation, the exclusive purview of the Congress. (In similar manner, the Left would have the Supreme Court assume a more activist role; for example defining marriage, rather than allowing the people to decide through their state legislatures. Is the opinion of nine individuals more sagacious than the collective wisdom of 200 million voters?) The Environmental Protection Agency’s attack on the coal industry was a politically motivated act to advance an agenda that it is doubtful that Congress would have approved. What legislator would have voted to impose mandates on an industry, the consequences of which, by the Administration’s own calculations, will be to raise coal prices 70-80%?

That usurpation of power was silently acquiesced to by most in mainstream media, because it was for a cause they support. But in doing so, they set a precedent that will return to haunt them. The question should always be asked of those who allow such power grabs – does the end justify the means?

Freedom is not elastic. It is finite. We are all willing to give up some element of freedom to live secure from enemies, eat foods that are deemed safe, drink water that is pure and take medicines that do what they are supposed to do. The debate, as it has always been, is about how much freedom are we willing to forego for how much security and safety we expect to obtain. Whenever the EPA issues a new mandate, some element of freedom is lost, but its loss is never explained or quantified. It is why laws should be enacted by Congress, so they can be openly debated and resolved in a manner that satisfies the majority. The Left is willing to give up more freedoms than the Right, and they are more likely to further their interests by imposing their will through executive actions and court decisions.

The path toward more government in our lives and the greater dependency that implies does not necessarily mean we will become a nation of Eloi, or that we are on a road to serfdom, to borrow the title of Friedrich Hayek’s book, or that we will become a Socialist state like France. But it does mean we are traveling in that direction, a fact that should be acknowledged by everyone, regardless of political bent. A benevolent dictatorship, a wag once stated, is the best form of government ther