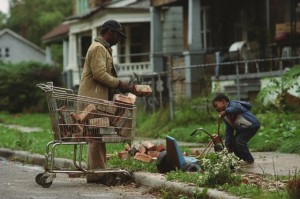 Detroit, Michigan, USA — Many of Detroit’s poor are forced to scavenge bricks from the fireplaces and foundations of abandoned buildings, often causing them to collapse in the process. After cleaning off the mortar, used bricks are pushed across town in stolen shopping carts and sold for ten cents apiece. — Image by © George Steinmetz/Corbis

“Bad news isn’t wine. It doesn’t improve with age.” So spoke General Colin Powell in a different, but still appropriate, context. For years, state and municipal politicians and union leaders enjoyed a symbiotic relationship: union leaders would provide the votes necessary for successful campaigns, while politicians would ensure that unionized employees would receive good wages and even better retirement and healthcare plans. For years, those in Detroit ignored the creeping obligations that would undo their city. They lived in a Panglossian world, with little concern for tomorrow, a world where the sun always shone and there was never a cloud in the sky.

Unusually good market returns over two decades allowed pension trustees to ignore the rumblings of a coming pension earthquake. The investment environment changed a few years ago. The trustees remained oblivious. Politicians and union leaders played the same games, combining delusion with corruption. Both leaders would have felt right at home in A.A. Milne’s make-believe 100 acre wood. “What day is it?” “It’s today,” squeaked Piglet. “My favorite day,” said Pooh.

Now it’s tomorrow. Last week, Federal Judge Steven Rhodes issued a wake-up call, allowing the city of Detroit to proceed with its bankruptcy filing. It is a decision that will have broad-reaching consequences, as the Chapter 9 filing does not protect the pensions of local government employees. About half of the nearly $20 billion in debt comes from the city’s unfunded obligations to its retirement and healthcare systems. Detroit filed for bankruptcy on July 18th, four weeks after Governor Rick Snyder appointed Kevyn Orr to be the city’s emergency manager. But it was only last week that Judge Rhodes issued his decision, one that will certainly be challenged, as the decision represents a clear and present danger for unionized employees in municipalities across the country. On the other hand, the decision represents a path forward for the hundreds of cities encumbered with debt and obligations, all of their own making. It presents an opportunity to look forward, rather than, fearfully, backward. The process will be painful enough that it should preclude a repetition…at least for a while.

The bankruptcy, besides demonstrating the inevitable consequences of promising what cannot be delivered, is a reminder of the risks of one-party rule. For the last 52 years eight Democrat mayors have been in charge, with Coleman Young running the city for twenty of those years. It is also a reminder of the Faustian bargains that are struck, when politicians, who are supposed to represent taxpayers, become more beholden and dependent on organized labor with whom they negotiate, and they did so, but not in good faith to the taxpayers.

Detroit today is a city of less than 700,000 – about the size it was a hundred years ago. Eighty-eight percent of the population is African-American. The city is a fraction of what it was in 1950 when the census showed 1.8 million people. The city is home to 78,000 blighted and abandoned properties, one fifth of the housing stock. Only 40% of its streetlights work and only a third of the city’s ambulances are operating. Sixty percent of the city’s annual 12,000 fires are in abandoned and blighted structures. According to the Detroit Free Press, it takes police an hour to respond to “priority one” 911 calls. The city has the highest property tax rates and the lowest property valuations in the nation. It appears a war-ravaged city. In fact, looking at photos of Hiroshima and Detroit today, one would be convinced that Japan won the War. Hiroshima is a modern city with towering office buildings. Its population has risen from 83,000 after the War to 1.1 million today. Detroit shrinks; Hiroshima blooms.

Granted, the management of the auto industry, which grew too fat off war-time military contracts and an absence of competition in the early post-war years, was incapable of adapting to global competition. They allowed unions to dictate terms so onerous they gradually bled the goose that laid the golden egg. Fat, dumb and happy would be a polite way of characterizing the management of Ford, General Motors and Chrysler at the time. Besides greed, corruption and cronyism among and between corporate leaders, politicians and public sector union leaders played a role. An abundance of riches became a scarcity in a few short years; but, like a character out of Edith Wharton, there was a refusal on the part of the actors in this tragedy to admit that circumstances had changed.

Redemption without pain is not possible. While the guilty in this saga are likely to escape without punishment, the same will not be true for the victims – Detroit’s 19,000 retired municipal workers and the 9,500 still employed. Judge Rhodes’ decision means that what had been promised will not be paid. In assigning responsibility, fingers will be pointed, but the fault lies with those who promised what could never be delivered. One might claim that recipients were naïve to believe in fairy tales, but I don’t believe that is fair. But neither is it the fault of the “rich,” nor of taxpayers across the nation. The fault lies with those who thought they could play the game forever – the politicians and the union leaders who lived off a lie and sacrificed the people who provided votes and paid their dues.

There are a number of troubled cities and counties in the United States. Most we have read about. However, the unfunded liability per household, as currently measured, exceeds $30,000 in Chicago, New York and Boston. Philadelphia’s solvency horizon is set at 2015; Boston and Chicago’s at 2019. In most cities and states the quoted unfunded liability masks the real situation. Most assume reinvestment rates of seven to eight percent. A more realistic number would be four percent. Under Governmental Accounting Standards Board (GASB) rules, governments will be required to use more reasonable investment forecasts. The difference is significant. Over forty years, the expected payout period for a forty-year old worker, one dollar invested at 8% becomes $22. That same dollar invested at 4% becomes $5, at 6% $10. Additionally, most pension plans assume an annual increase in inflation of 2%, which is built into their obligations. One union leader recently suggested that annual inflation increases be eliminated, as one way to reduce future obligations. That it will, but it strikes me as sneaky; by the time the recipient realizes what has happened, the official will have moved on. But then that is to be expected among the ethically-challenged in political and union leadership positions.

It is a sad story with an unhappy ending. Yet, from such ashes Phoenix’s can arise. The advantage of bankruptcy is that it allows for a fresh start, a new beginning. The attractions of Detroit that allowed the city to grow in the first half of the 20th Century are still there – its natural beauty, hidden by urban blight, yet seen in its lakes and hills, but most importantly in its people who have proved in the past they are smart, creative and industrious. A new start will allow the city to focus on its decaying infrastructure and allow it to tempt new investors, industries and businesses with favorable tax and regulatory proposals. We have seen the risks of one-party rule, and the corruption that it breeds must be weeded out. Defined benefit retirement plans must move toward defined contribution ones, but reform won’t be easy. Big government unions are pressuring those in Congress to disallow 401K-like plans, as being too risky for government employees. A bipartisan bill in the Congress that would amend the IRS code has gone nowhere because of union opposition, as Steven Malanga wrote in last weekend’s edition of the Wall Street Journal.

The lesson from Detroit will most harshly be learned by those whose pensions will be cut. But it will only have lasting meaning if those lessons trickle up to politicians and union leaders. Bad news cannot be hidden forever. And it will not get better over time. The false promises that have been made must be addressed squarely. Evasive answers to simple questions, or looking for someone else to blame will not do. Medicine must be taken for what has been done, and the system must be reformed to prevent future occurrences.