Liberty in Turkey: Past and Present 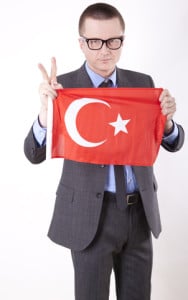 While covering demonstrations in Istanbul recently to mark the anniversary of the Gezi protests, correspondent Ivan Watson was shoved, kicked, and briefly detained during a live broadcast on CNN International. Unfortunately this illustrates all too well the deterioration of civil liberties in Turkey over the past year.

According to Freedom House, Turkey ranks as a partly free country, but its press has dropped to “unfree” status. Watson’s mistreatment shows why.

It’s not only the news media that is harassed by the government. Two members of the 3H Movement, the classical-liberal youth organization and an Atlas Network partner, were illegally detained after they hung a banner with the word Korkmayın (Don’t Be Afraid) at the Liberal Democrat Party’s headquarters in Istanbul. They were fined $150 and released after being charged with a misdemeanor.

For these reasons, advocates of liberty are pessimistic about the future of human rights in Turkey.

For the record, Turkey was never a bastion of liberty. Beginning after World War I, the newly founded Turkish republic was ruled by one-party regimes until 1950. Elected prime ministers, cabinet ministers, and members of parliament were hanged, exiled, jailed, or forced to resign in various coups and similar actions.

Since the republic was established, Turkey’s non-Muslim minorities have faced serious property violations and discrimination. For example, the capital tax of 1942 was enacted not only to collect revenue, but also to seize non-Muslims’ property. The tax law did not single out non-Muslims, but in practice only they faced high taxes, whether they were rich or not. Non-Muslims who could not pay the tax were sent to labor camps, and 21 died due to the harsh conditions.

More recently, a serious Kurdish insurgency has claimed 40,000 lives and hundreds of billions of dollars since 1984. But Turkish officers deny any Kurds live in Turkey. Their language is banned, and they still cannot teach it in schools. Discrimination was and still is practiced everywhere.

Even Muslims are not immune from civil-liberties violations. Wearing headscarves, a religious duty for Sunni Muslims, was banned for government personnel and university students.

The government not only denies that the Turks perpetrated genocide against Armenians in 1915, but also prosecutes anyone who speaks of it. After the 2007 daytime assassination of Hrant Dink, an outspoken journalist of Armenian descent who claimed that Turkey’s first woman pilot was an Armenian orphan, government officials had their pictures taken with his murderer.

This is Turkey today. Sadly, the alternatives to Erdoğan’s AK (Justice and Development) Party, the CHP ( Republican People’s Party) and MHP (Nationalist Movement Party), are even less liberal.

CHP does not support the free market, and although it seems to support freedom of speech, it also supports the infamous article 301 of the Turkish Penal Code and Law No. 5818, which forbids criticism of Ataturk. This is the law that was used to block YouTube in 2007, and no CHP member of parliament objected. (Erdogan’s government circumvented the law to restore YouTube, but now wants it blocked again.)

The MHP is another story. The party came to power in 1999 with two partners in a coalition after Abdullah Öcalan, leader of the militant PKK (Kurdistan Worker’s Party), was captured that year in Kenya. But three years later, all three parties collapsed. Corruption, economic crisis, and political instability were taking Turkey to destruction.

Rule by the MHP would be a nightmare for Turkey’s classical liberals, who advocate the free market and human rights, including the rights of minorities.

After the collapse of the MHP government, Erdoğan’s AK party won the elections. The party passed reforms in many areas, changed the constitution in line with demands of the European Union and took other important steps toward EU membership, ended military tutelage, and shortened individuals’ military obligation.

In two months Turkey will elect its president by direct vote for the first time. Erdoğan’s rival is the joint candidate of the CHP and MHP, Ekmeleddin İhsanoğlu, a professor and ex-secretary general of Organisation of Islamic Cooperation. Whoever wins, Erdoğan will stay in power, if not as president then as prime minister.

What hope is there for the liberalization of Turkey?

For a hundred years the people of Turkey — when permitted — have elected the more liberal alternative. They elected Erdoğan, but in too many ways, as I’ve pointed out, he has parted with the liberals. To stop the drift to democratic authoritarianism and to put Turkey back on the rails to the EU, human rights, democracy, and freedom, Turks will have to work harder to transform their organizations into effective pressure groups. To do so, we should welcome help from our friends abroad. After all, a more liberal democratic Turkey is essential for peace and prosperity in Europe, the Balkans, the Caucasuses, and the Middle East.

The views expressed on AustrianCenter.com are not necessarily those of the Austrian Economics Center.
hayek_admin2019-01-14T06:16:31+01:00