Lorca on Headwinds and Tail Risks: It’s Five O’clock at the Crossroads of Liquidity and Volatility

Could the markets suddenly unravel? Of course they could. The fiat monetary system is like a mirage, it can tumble because of underestimated circumstances. Imagine for example Greece abruptly leaving the Eurozone, defaulting on its EFSF loans of €240 billion, its Target2 obligations of more than €80 billion, and the ELA assistance of close to €75 billion.

All of a sudden all the Eurozone central banks (including the ECB) would need to be recapitalized, and all Eurozone states would have to write down the losses in their budgets!

Welcome to the butterfly effect, or what Federico Garcia Lorca (the most famous Spanish poet) would have said (in his most well-known poem) “it’s five o’clock in the afternoon” and the dusk closes in for the final goodbye/funeral of his dear friend Ignacio Sanchez Mejias.

The markets are facing strong headwinds in the form of limited liquidity while experiencing stronger tail risks due to rising volatility. Let me start with the former: Several investors’ circles think that due to QEs the markets enjoy ample liquidity. This is a dangerous misconception. Liquidity is the ability to sell an asset without significantly affecting its price. Because an asset might be marketable, it doesn’t make it liquid. You can always find a buyer at deep discounts, but this certainly does not make the asset liquid. As a matter of fact, liquidity is usually not there when you need it the most, simply because everyone else is looking for the exit. To come to our first conclusion when the biggest bubble ever (a.k.a. the bond market) bursts, liquidity will be so low that what looked like a simple butterfly movement will turn out to be a volcano that suddenly experiences an awakening. It’s getting to be five o’clock in the afternoon when the dusk closes in and death lays eggs in the wounds of an illiquid market.

In a market where QE has introduced a good number of distortions such as illusory liquidity, price discovery is a forgotten exercise, which may cause liquidity to disappear in a time of crisis when the butterfly moves (a mini event like last October), the Middle East experiences a series of civil wars (Iraq, Syria, Libya, Yemen), proxy wars are being fought, and the markets (including the currency markets) are in volatile swings. The absurd reality of negative yields (i.e. paying the bond issuer to take the investor’s money) implies one thing: bond premiums will disappear and good assets will suffer price declines as illiquidity infuses panic at five o’clock in the afternoon when the dove and the leopard will wrestle.

Speaking of volatile markets let’s look at two graphs as reported by the Office of Financial Research of the US Treasury. The first figure below is a clear indication that in the last ten months volatility has doubled across equities, bonds, currencies, and commodities such as oil. 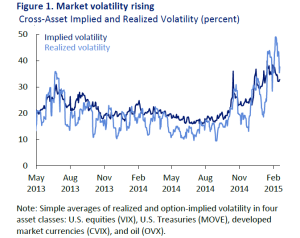 At the same time, the option-implied volatility (which signifies future asset price volatility) is well-above historical averages, as the following figure shows. 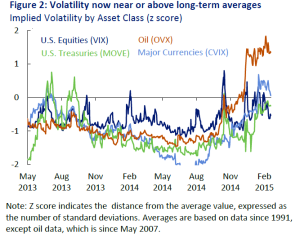 When the rising market volatility is combined with a liquidity bifurcation (where trading is concenrated in a few liquid bonds) then the holdings of bond dealers are trimmed, and this contraction in bond holdings imples that markets are less resilient to shocks, which further signifies that liquidity risks are rising. In an environment of financial repression with zero-bound interest rates, bond dealers are unwilling to commit their balance sheets since they cannot commit thelmselves to financial ruin when rates start rising. When market valuations are changing in the sense of forthcoming financial stress, dealers are not willing to catch a falling knife; hence they will trim their inventories and narrow bid-ask spreads betray rising liquidity risks. At five o’clock in the afternoon the reality is that bond inventories are falling (see middle graph below), holdings are being trimmed (left graph below), while liquidity buffers have been trending down (right graph below). 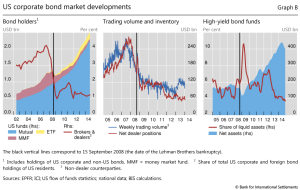 Federico Garcia Lorca lost his dear friend Ignacio Sanchez Mejias in a bullfight that he was not supposed to participate in. Sanchez Majias was ill-prepared for a bullfight, and Lorca refused to see his blood in the arena.

Let’s recall some of the verses in the eloquent elegy.

His eyes did not close
when he saw the horns near,
but the terrible mothers
lifted their heads.
And across the ranches,
an air of secret voices rose,
shouting to celestial bulls,
herdsmen of pale mist.
There was no prince in Sevilla
who could compare to him,
nor sword like his sword
nor heart so true.
Like a river of lions
was his marvellous strength,
and like a marble toroso
his firm drawn moderation.
The air of Andalusian Rome
gilded his head
where his smile was a spikenard
of wit and intelligence.
What a great torero in the ring!
What a good peasant in the sierra!
How gentle with the sheaves!
How hard with the spurs!
How tender with the dew!
How dazzling the fiesta!
How tremendous with the final
banderillas of darkness!

But now he sleeps without end.
Now the moss and the grass
open with sure fingers
the flower of his skull.
And now his blood comes out singing;
singing along marshes and meadows,
sliden on frozen horns,
faltering soulles in the mist
stoumbling over a thousand hoofs
like a long, dark, sad tongue,
to form a pool of agony
close to the starry Guadalquivir.
Oh, white wall of Spain!
Oh, black bull of sorrow!
Oh, hard blood of Ignacio!
Oh, nightingale of his veins!
No.
I will not see it!
No chalice can contain it,
no swallows can drink it,
no frost of light can cool it,
nor song nor deluge og white lilies,
no glass can cover mit with silver.
No.
I will not see it!